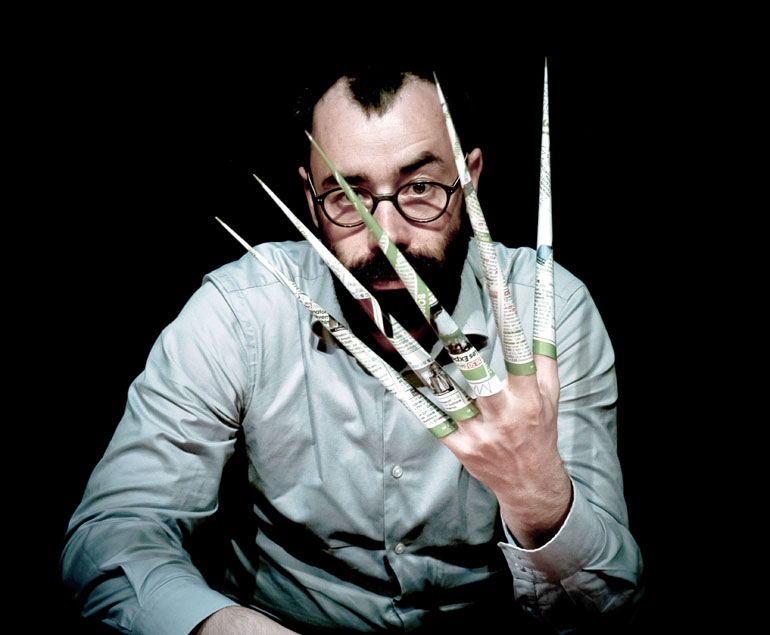 The world of circus artist Étienne Manceau is a strange, funny, and sometimes spooky place. It’s a place where newspapers can become claws; where small obsessions like a proper cup of tea can make you crazy; where common objects appear in a new light as they’re touched, moved, transformed.

Manceau performs four shows of Vu this week as part of the FCCS Performance Series, presented by UBC’s Department of Creative Studies. Manceau worked for years as a juggler and has had deep involvement in circus culture. This one-man show applies the comical ethos of the circus world to a story about a sensitive, meticulous man and his relationship with everyday objects.

Manceau’s performance is wordless, a blend of Object Theatre, clowning and what the artist calls “miniature circus.” It’s a mix that could only come from the mind of an eccentric. The creator shows wit, wonderful dexterity, and small-scale ingenuity in his comic mugging — precise physical feats and sheer wackiness that call upon the tradition of old-fashioned physical comedy.

All shows are $25; $15 for students and seniors. Tickets can be purchased at the door and online at theatre26.ok.ubc.ca.

The FCCS Performance Series is made possible through the generous support of the Central Okanagan Foundation and UBC Okanagan’s Deputy Vice-Chancellor and Principal’s Office.