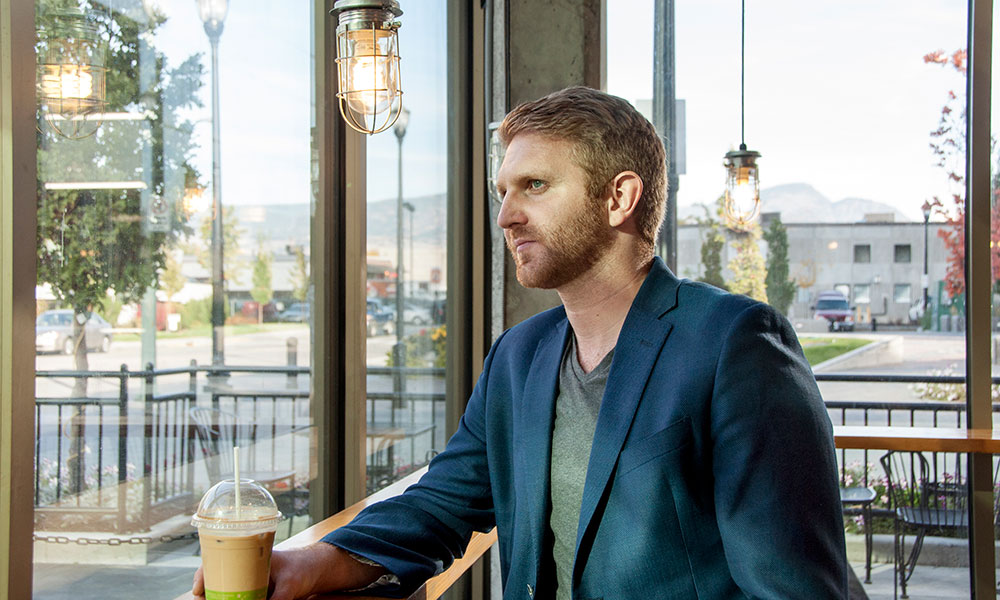 “Once I let my natural voice take over, the words just flowed.”

UBC OKANAGAN’S CREATIVE WRITING program didn’t teach Joe Dermo how to write. What it did teach him was how to write confidently in his own voice.

“I was trying to be what I thought a novelist or short story writer should be instead of sitting down and being confident with my own voice,” he says. “Once I let my natural voice take over, the words just flowed.”

Dermo remembers this prof telling the class to go home and be confident in their writing. He did as he was told, and that night an award-winning story flew from his fingers onto the page. Why Creative Writing?

The story, “Man on a Post,” described as a dark comedy-drama about family, loss, and desperation, won first prize in the Okanagan Short Story Contest. It was Dermo’s second award in as many years; the first being a three-hour short story contest he won the previous year while at Okanagan College.

Dermo, now working at Disney’s Kelowna office, recounts the story reluctantly aware that it sounds cliché to say he had an `aha’ moment when “it all came together.”

“It sounds overly romantic and absurd to think that such simple advice could have the effect that it did.”

Dermo was in his late twenties and at a crossroads in life when he decided to pursue creative writing. He’d have preferred to study art, but lacked a certain something.

“I got into writing because I couldn’t draw and that’s what I wanted to do,” he admits. “I wanted to be able to create things and writing was the second best way to do that because I’m a god-awful artist.”

He transferred from the college to UBC Okanagan’s Creative Writing program, where he thrived by taking advantage of the small classes and exceptional professors passionate about helping students grow as writers.

For Dermo, that meant learning to mix and mingle with the literary crowd—a stretch for someone who prefers tête-à-têtes over larger gatherings.

“I thought writing was something an introvert could do but you learn that you can’t be that lonely writer holed up writing all day,” he says. “You have to get out into the community, meet other writers, network, and sell yourself.”

“When it comes to screenwriting and prose,” Dermo says, “Michael can put things in a really mathematical way that almost sounds plain or dull but is completely the opposite.”

The Creative Writing program helped Dermo develop skills that can be used in virtually any creative profession, regardless of whether writing is involved. It taught him how to think critically and how to give and take feedback respectfully.

He points to his short story “Man on a Post” as an example of how an effective critique can transform a piece. He says the story, published in the Sheepshead Review in 2013, would never have been accepted in its original form.

“Without the feedback I received from my classmates and profs it would have been a completely different story than the one I submitted, and in all honesty, one that wasn’t as engaging.”

LEARNING FROM THE PROS

One of his favourite mentors—and there were many—was Smith, who describes himself as an interdisciplinary artist who works as a writer, filmmaker, performance artist, and occasional clown. His most recent book is the memoir My Body is Yours.

“He’s such as witty, comedic person that he initially seems like a bit of a joker but he’s able to break down storytelling in a logical way,” Dermo says.

He is in also awe of Assoc. Prof. Anne Fleming, who he has read but didn’t have classes with.

“She is such a clever, witty writer and she makes it seem so effortless,” he says. “It is what I want my writing to be.”

Fleming and other profs in the Creative Writing program make themselves accessible to students, and can be found rubbing elbows and talking shop at writing events in the community. Dermo says the Kelowna writing community is incredibly accepting of new writers.

“I’ve never felt like I was a rookie, in fact they always treated me with respect, like I was a writer on their level,” he says. “They’d ask questions about my writing and be genuinely interested in what I had to say, which really surprised me.”

Dermo completed Creative Writing with a surprisingly perfect GPA, putting him on the Dean’s List, and winning the Chancellor’s Scholar and Deputy Vice-Chancellor Scholarship awards, which followed his Creative Studies Transfer Prize during the leap from college.

Dermo is working at Disney Interactive where he splits his time between editorial, marketing, and player support. He says making a living writing can be challenging but not impossible if you learn how to market your transferrable skills to employers who may not initially see a Creative Writing degree for what it is.

“The ability to think critically, assess a situation, and think outside-of-the-box is going to be valued in nearly any business and it’s up to you to show prospective employers how that applies to their business,” he says.

“At Disney Interactive we’re faced with new situations each day. Of course, the ability to write well and have creative flair plays a part, but there’s more to it than that.

“There’s a certain magic in Disney products, and you want to ensure that your voice can convey that.”