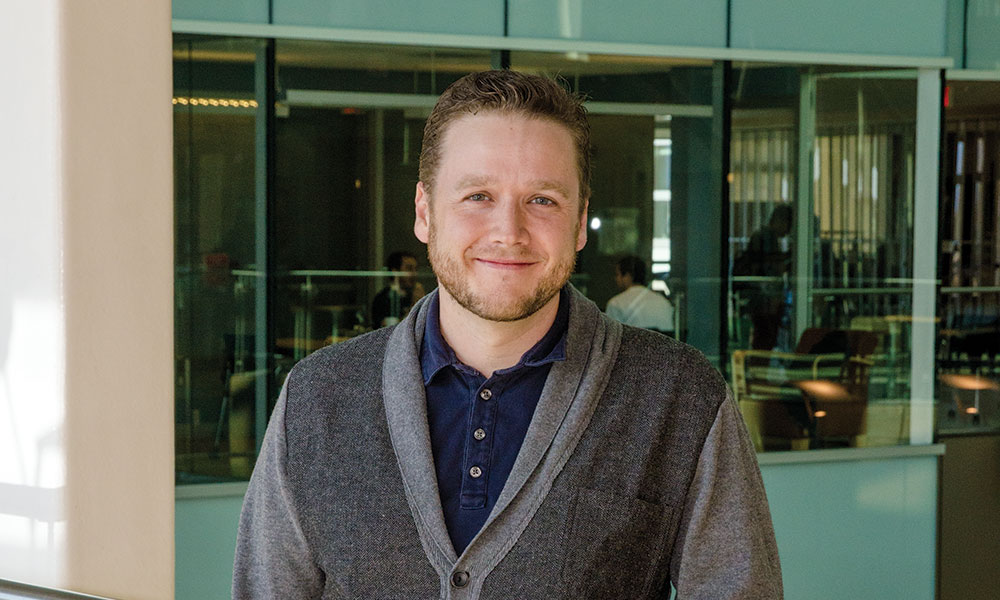 “What a wonderful career, where you can be taking someone’s pulse while holding their hand. That’s what I love most about my career in nursing—that it’s good for the soul.”

IT WASN’T THE OUTCOME HE’D PREDICTED FOR HIMSELF. But the nursing program at UBC’s Okanagan campus has given graduating student Matthew Rigby a new sense of place, purpose, and belonging—and an exciting future to carve out for himself.

“There are more opportunities in nursing than I realized when I started,” says Rigby. “The type of nursing I do when I graduate will be completely different from what someone else will do. It’s a great profession as there are lots of avenues.”

Which avenue he’ll take is still unclear, which excites Matthew. “You’re never done learning,” he says. “At this point in my degree, people say I’m right near the end. But really, I am right near the beginning. There will be lots of opportunities in nursing to be trained for different units, to upgrade, and to develop specific skill sets.”

Those future opportunities will be grounded by the general foundation of nursing he built while at UBC Okanagan. “Nursing is a jack-of-all-trades knowledge of how the body’s systems interact. It’s learning how to care with all of your faculties to pick up on things, communicate well, and sometimes teach patients who aren’t literate to their health.”

The life of any nursing student is demanding, but Rigby’s experiences were probably more hectic than most. Before university, he worked for 10 years as a cook in Calgary and Banff.

“I’m 35 now, so I was later to go into post-secondary than most of my class,” he says. “My kids are ages 7, 5, and 1. My wife wrapped up her Master of Social Work program when my five-year-old was born; I started in the education program the following September, and my one-year-old was born last year.”

While he wasn’t excited to add more to his plate, Rigby knew he needed to prepare for his future. “I had become assistant manager at a group home for adults with disabilities,” he says, “and I found I was out of my element for discussions with doctors about people’s health needs.”

PUSHED TO HIS LIMITS

“When I started the Nursing program, I was often frustrated with the distractions of my life. However, most people in their thirties don’t get a chance to go back to school so I feel fortunate for the opportunity to go back.”

Rigby says the nursing program pushed him to his limits and broadened his horizons, teaching him to investigate knowledge of how the body’s systems interact.

“One of the interesting things about nursing is that through caring about patients’ health you develop a tenderness for people,” he says. “What a wonderful career, where you can be taking someone’s pulse while holding their hand. That’s what I love most about my career in nursing—that it’s good for the soul.”