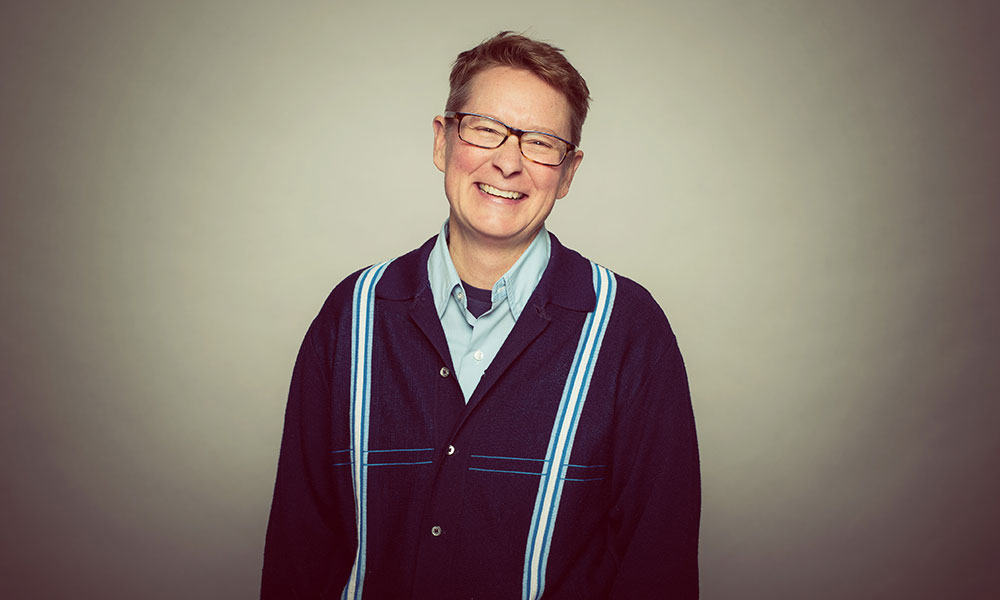 “My best day as a professor is when someone gets something they didn’t get before.”

WRITERS ARE A DELICATE BUNCH driven to write but terrified of being read.

Anne Fleming understands this paradox and is careful not to discourage students accustomed to unadulterated praise from family and friends. She says her job, as Associate Professor in the Creative Writing department at UBC’s Okanagan campus, is to acknowledge each student’s vision while providing constructive criticism that will ultimately make them better writers.

She says working with students whose sense of self is often bound up in their writing can be a tricky, but ultimately rewarding, experience, that can lead to creative breakthroughs.

“There have been times when a student has been really, really hurt but as we talk they understand more and are able to see that I have valid points and am not dismissing everything they do,” she says. “My best day as a professor is when someone gets something they didn’t get before.”

Fleming describes herself as a facilitator (although she hates the word), whose job is to help students learn how to teach themselves.

“I try to be in the background asking questions to get people to do it for themselves. Sometimes it looks like I’m not doing much, but in fact I think I’m helping people draw out what they already know, or what they are learning that they know.”

She enjoys watching students find their voice and gain confidence as they progress from first year through fourth. It’s also rewarding to watch students support one another.

Fleming is a prolific writer with an impressive portfolio of work that includes three books and a soon-to-be-published collection of poems titled “Poemw” (The typo was purposefully left in after it appeared in little books of poems she made for friends.).

She has won or been nominated for an impressive number of awards including the Governor General’s Award, the Ethel Wilson Fiction Prize, the Danuta Gleed Award, and the National Magazine Awards.

Like many writers, Fleming read feverishly as a kid, but she never dreamt she would write professionally one day.

“I had a mystical notion of writers as special beings that I could never possibly be,” she recalls. “I loved the sense of inevitability in stories; that sense that the character shouldn’t do that thing but had to do that thing because that’s who they were.”

She was an undergrad studying geography when she realized writing was a craft she could learn. Initially, she wrote things to make her friends laugh. When they did, she wrote more.

Her advice to anyone wanting to write is predictable but valid. “If you want to do it, do it and don’t be chicken because it will never happen if you are chicken. It’s also important to read and like sentences.”

Fleming joined UBC’s Faculty of Creative and Critical Studies in 2005 and says that one of the best things about the campus is having the opportunity to get to know students in a way that’s not possible at a sprawling institution. To illustrate her point, she recalls the day several years ago when she found herself on campus during orientation tours.

“I remember walking around campus that day and being able to say hello by name to three students leading the tours and feeling a real sense of pleasure and happiness knowing that was the case. I suspect I wasn’t the only professor to greet those students by name.”

When we think of writers we often see them holed up in their office typing frantically while the rest of the world sleeps. That was Fleming before motherhood dictated a schedule change.

“Before I had a kid, I always wrote at night. I loved the feeling of possibility that the night yawning before me gave and I could sometimes hit this amazing generative groove where the words and ideas were just there.”

On a day dedicated to writing she pens about 1,000 words. Inspirations are scribbled in a notebook that includes ideas, observations, and phrases from which an entire story may one day be launched. Other times, an image (say, a boy on a unicycle) sparks a thought that becomes the first line in a story. In this case: “There is always a boy on a unicycle.”

Another time, Fleming was gazing up at the wide ledge of a New York building when an absurd observation popped into her head. The thought? “A mountain goat could live on that building.”

“I can’t do too much thinking before starting to write or nothing will get written and I will never figure it out,” she says. “For me, the thinking about the shape of the story and the writing itself are a sort of double helix—they’re twinned and they spiral.”

There’s no telling what could inspire Fleming’s next book or short story. Perhaps it will be the tumble she took while skateboarding with her 12-year-old just a few days before the fall semester was to start, which resulted in a broken leg.

Perhaps that will be scribbled down in her notebook alongside unicycles and mountain goats. Or she might write something altogether different. The possibilities are endless.