Tackling water use issues through innovation 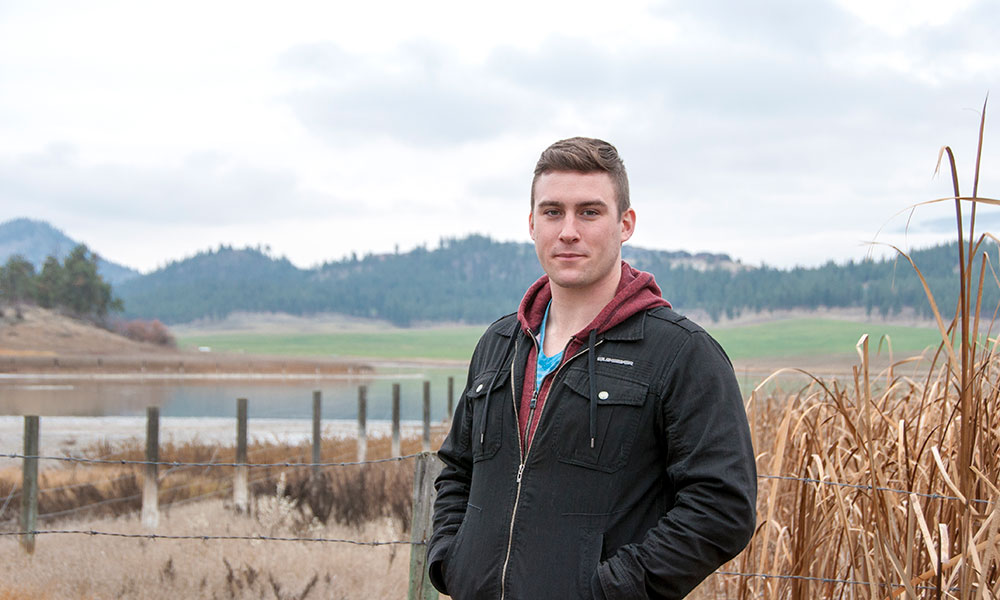 “Water is essential yet in developed countries like ours we don’t think twice about using it because there is this myth of abundance.”

AFTER 16 YEARS OF SCHOOL in the Shuswap and Okanagan, Jonathan Bepple was ready to spread his wings and explore new territories. Life, it seems, had other plans.

The Ecology and Evolutionary Biology student was preparing to leave Kelowna and the post-secondary world when an email arrived announcing a new course would be taught by distinguished UBC professor Lael Parrott. Cross-appointed in the Departments of Earth & Environmental Sciences and Biology, Parrott heads up the Complex Environmental Systems Laboratory, and directs the Okanagan Institute for Biodiversity, Resilience, and Ecosystem Services (BRAES).

“After reading the course description I realized I had no choice but to stay,” he says.

In Parrott’s class, Bepple used a program called NetLogo to simulate natural and social phenomena to inform management and planning decisions that promote environmental sustainability. Halfway through what was to have been his final semester, he asked Parrott to supervise his master’s research.

“I guess, in a sense, you could say I saw the light and realized this is something I really wanted to do,” Bepple says. “I knew this was an issue that wasn’t really being addressed well so my position changed from not wanting to do a graduate degree to deciding this would be a great opportunity, especially with UBCO positioning itself as an innovator in water research.”

Always interested in water issues, Bepple set out to improve the way residential water use is measured and to create a tool government agencies, including the City of Kelowna, can use when making decisions about future water use. The program has the potential to serve as a significant policy support tool—especially in Kelowna, where water use is double the national average.

“People see green and think that’s how it’s always been, and it has for their lifetime, but if you go back to 1850, this area (Kelowna) was bone dry and water had to be piped in, just as it is today.”

Using computer-based models, Bepple is able to do more than measure overall water use.

“Measuring overall water use isn’t particularly useful when developing targeted water conservation strategies, however being able to pinpoint where water is used and by whom is incredibly helpful,” he says.

“In the past it wasn’t possible to do detailed simulations of residential water use because it’s computationally intensive, but the strongpoint of agent-based modelling is we can monitor individual units that are making these decisions.”

Using NetLogo and GIS data, Bepple created a virtual world where he charted the location of everything from condos, to apartments, and houses. Once complete, he used survey data to populate the simulated city with a mix of residents—some supportive of water conservation, others not— and monitored how changes in policy impacted water use and the behaviour of residents.

What he discovered is that the few people who are concerned about water scarcity are negatively influenced by a larger number of those who believe they have an inherent right to use as much water as they want.

“Think of a neighbourhood where nine out of 10 houses water their lawns like crazy and have bright green lawns. Chances are the person with yellow grass is going to feel pressured to water.”

A THESIS IS BORN

Bepple’s NetLogo program and thesis project will be made available to the City of Kelowna and other local government agencies who can use it to evaluate how influences such as price, precipitation, and landscaping choices affect water use.

Preliminary data suggests that changing the way people irrigate is key to curbing consumption. Unfortunately, data also shows people will not replace their grass with xeriscaping or upgrade their irrigation systems due to their high cost and will continue to overwater, even when utility prices increase dramatically.

That could mean following Australia’s lead and introducing alternatives such as water rationing, restructured tiered pricing, and water restrictions—something the country did along with building desalination plants to convert sea water into fresh potable water.

“Water is essential, yet in developed countries like ours we don’t think twice about using it because there is this myth of abundance,” Bepple says. “In Australia they have rivers that no longer reach the ocean—we have begun to see some of this even in the Okanagan, with Trout Creek in Summerland drying up in 2003.”

Bepple has spent countless hours in Parrott’s Complex Environmental Systems Lab but has also immersed himself in campus life.

Why Ecology and Evolutionary Biology?

He is actively involved in the Biology Course Union, has worked as a teaching assistant, and served as academic lead for the Summer Scholar’s Program. He also worked as a research assistant on campus and at the University of Gottingen in Germany, where he spent a summer researching the effects of changing agriculture practices as part of the German Academic Exchange Service Research Internship program.

As a Co-op student, Bepple spent two semesters working in the Ecosystem and Biodiversity Priorities division at Environment Canada, which he credits with helping him land the competitive German internship.

After graduating with his master’s degree, Bepple plans to work as a consultant and venture—if only briefly—outside the Okanagan community where he’s spent his entire life. He says completing his PhD isn’t something he plans to do anytime soon.

But, if history is any indication, Bepple could be on campus next fall pursuing more innovation in water research.