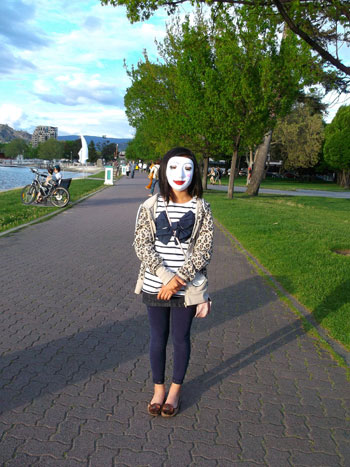 The photo Woman in Mask will be one of the images on display at the Alternator Centre for Contemporary Art starting February 26.

Kelowna immigrants feel underemployed and struggle to achieve a sense of belonging, a UBC researcher has found.

In a recent UBC Okanagan-led study of resettlement, funded by the Canadian Institute for Health Research, recent immigrants to Kelowna said that integration into their new community has been harder than they thought.

“When the participants of the study came to Canada, they said that they have tried really hard to integrate but they are bumping into social, cultural and economic barriers,” says Shirley Chau, an Assoc. Prof. of Social Work at UBC Okanagan and the study’s lead investigator. “The settlement experience can be so challenging that it impacts health and wellbeing, and those have population health outcomes both in Kelowna and across the country.”

Chau’s study took place in three Canadian cities, including Brandon (Man.), Red Deer (Alta.) and Kelowna. Each city had unique immigration patterns and experiences of new Canadians varied. The study was conducted between 2013 and 2015.

“One of the surprises for many people who came was the employment situation,” adds Chau. “Many who were professionals, such as lawyers, came to Canada and had to take work in fields such as housekeeping or retail, which was not in line with their training and professional qualifications.”

Yet, it was their professional qualifications that the Canadian government acknowledged as a valuable contribution to Canadian society, adds Chau.

According to 2011 census statistics from the B.C. government, 7.6 per cent of people in Kelowna were considered visible minorities. This included 2,630 people from South Asia, 1,480 from China, 1,060 from Japan, 870 from the Philippines, 685 who self-identified as being Black, 525 from Latin America, 440 from South Korea, 325 from Southeast Asia, and 195 who identified themselves as being Arab.

Over half of new Canadians surveyed in Kelowna at that time had post-secondary education with nearly 90 per cent having earned those qualifications outside Canada.

As part of her study, Chau asked the participants to take photos of their integration experience, which will be on display at the Alternator Centre for Contemporary Art from February 26 to March 5.