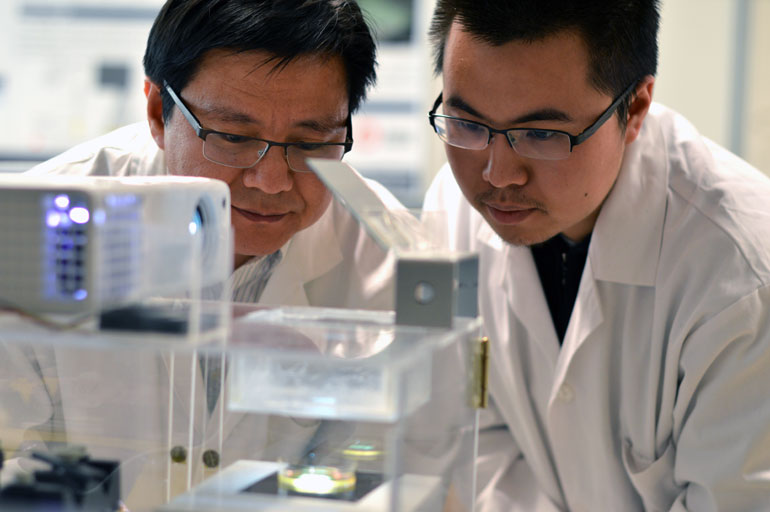 A chemical compound developed by UBC researchers makes it possible to create biological tissue with a light projector you can buy at Walmart.

The compound, a new type of biological ink used in the 3D printing of tissue, eliminates the need to use UV light systems in favour of safer, more conventional light.

“UV light is known to be cancer-causing and can damage a cell’s DNA, which is not ideal when trying to create tissue for medical purposes,” says Keekyong Kim, an assistant professor of Engineering at UBC’s Okanagan campus. “By developing our own bio-ink, we can create bone, cartilage and tissue without the risk that we will make the cells sick in the development process.”

In his research, Kim uses the stereo lithography, a standard 3D printing process that allows for the creation of materials on a layer-by-layer basis.

During the 3D printing process cells are combined with biological ink that becomes a bulkier gel-like material, called hydrogel, when exposed to light. The hydrogel acts as a scaffolding system allowing the bone or tissues to regenerate in the desired shape, and is later broken down by enzymes that are secreted as the cells regenerate.

The key to Kim’s research was a photo-initiating chemical compound that allowed the bio-ink to react to the light of a normal projector, a light source that has been used to print plastic 3D models but not biological material.

“With our photo-initiator, we were able to use a more conventional light source, which hadn’t really been tried in 3D bio-printing before,” says Kim. “The result is we are able to make medical tissue in a way that is not only safer, it’s cheaper.”

Kim’s research, and that of his collaborators Zongjie Wang, Raafa Abdulla, Benjamin Parker, Roya Samanipour and Sanjoy Ghosh, was recently published in the journal Biofabrication.