The smell of your breath is the science behind a new device that will determine if you’re too stoned to be behind the wheel.

UBC Okanagan engineering professor Mina Hoorfar has developed a handheld device, known as a microfluidic breath analyzer that can detect the presence of tetrahydrocannabinol (THC) in a person’s breath. THC is the psychoactive ingredient in cannabis.

“It’s very easy to test for THC as it is a big molecule that stays in your breath for a long time,” says Hoorfar, recently named UBC Okanagan’s researcher of the year. “There is a period of 12 hours after you have consumed THC when it can still be detected in your breath.”

THC also stays in the blood and in saliva. However, roadside testing involving blood analysis or spit tests is not an easy process, and results are not immediate. With Hoorfar’s device—about the size of two fingers together—a law enforcement officer can determine within seconds whether a person is impaired. 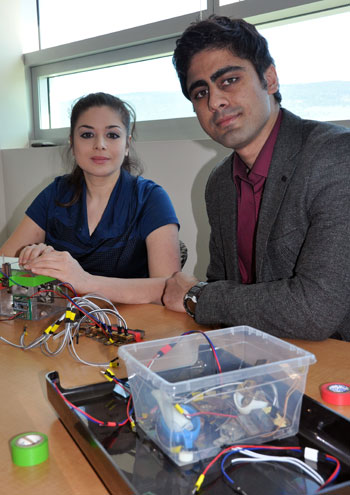 The device costs about $15 to manufacture and is Bluetooth-enabled so data can be collected using a cellphone.

“This is a tool not just for the police, but perhaps more for self-testing and self-monitoring,” says Hoorfar, noting it can also be used as a personal breathalyzer after alcohol consumption. “People can consciously make the choice to test themselves after they have consumed THC or alcohol.”

The microfluidic breath analyzer, made with a 3D printer at the UBC’s campus in Kelowna, British Columbia, uses a single gas sensor along with a micrometer deep channel (not even as thick as a strand of hair). The highly-sensitive semiconductor gas sensor is inside the microchannel—and diffused exhaled breath is recorded and analyzed as it flows through this channel. The “smellprint” of the exhaled breath is then provided by the device showing how much marijuana has been consumed.

Hoorfar says with the decriminalization of cannabis on the federal government’s radar, and several American states legalizing the substance, it’s only a matter of time before driving while stoned becomes an enforcement matter. Police in Colorado and Washington states use an oral swab to test saliva, or can order a blood test. But even in those states, there is no legal definition of the amount of THC that can determine if a person is too impaired to drive.

Hoorfar is the head of the Advanced Thermo-Fluidic Laboratory (AFTL) where she and PhD student Mohammad Paknahad developed the microfluidic breath analyzer. The lab is an interdisciplinary research facility where professors, post-grad students, and researchers work with biochips and digital microfluidics.

Using technology in the lab, Hoorfar and Paknahad realized their device can also register odours other than THC. It is currently being tested for ketones, meaning diabetics may eventually be able to take a breath test instead of a finger prick blood test to monitor their glucose levels. The device is also being tested above gas lines, via a drone, to determine its capability of detecting a gas leak.