Living in dynamic interaction with the world 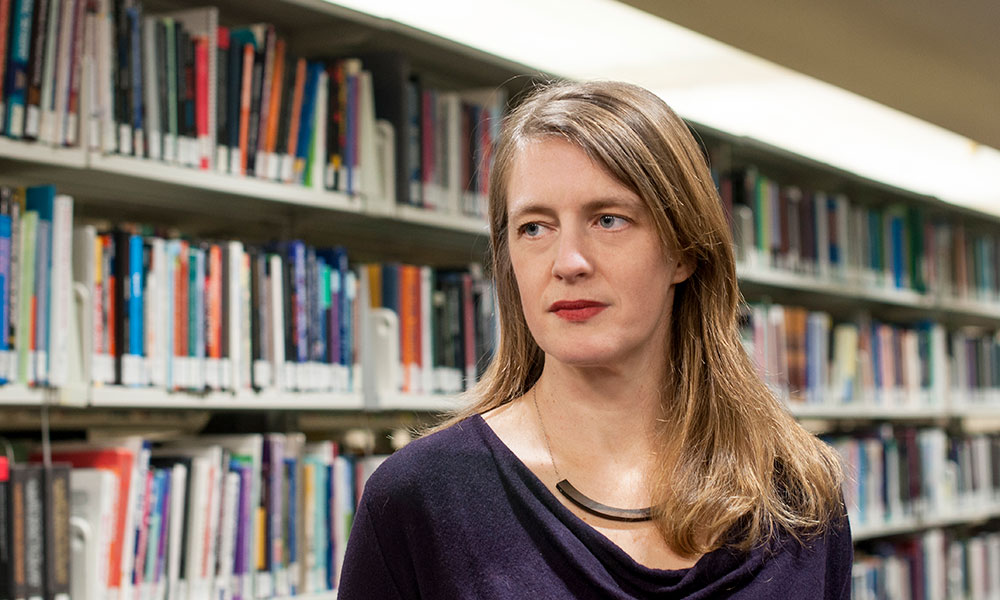 “Questions are the place where good thinking happens.”

ILYA PARKINS OFTEN RECEIVES GLOWING PRAISE from students transformed by her classes in Gender and Women’s Studies, but the UBC professor takes none of the credit. It’s the material that is transformational she insists, not the messenger.

“One of the pleasures of doing this job is I get lots of feedback in a way that I don’t think many people in other fields get,” she says. “Students tell me I’ve changed their life, but what I’ve done is introduce them to a perspective that allows them to see the world through a gender lens or a social justice lens that changes them profoundly.”

Students learn things that change the way they look at the world and their place in it, she says. Some come to realize that it’s their responsibility to speak out about social injustice, while others decide to alter their career path in favour of meaningful work.

Undergraduate Karleen Delaurier is one of many students who praise Parkins for her ability to explain complicated concepts.

“I can’t believe she is so humble because I know for a fact that when I was reading the textbook, it was so difficult to understand, especially just coming from high school,” Delaurier says. “She made it so easy to retain.”

“Having taught at other universities I think this is the most open bunch of students I’ve ever encountered,” she says.

Parkins is as enamoured with UBC’s Okanagan campus as she is with its students, and the campus, she says, is the optimal size. Not too small, but not too big.

“I get to know students really well and I love that. Even in large classes, people put up their hands and ask questions that lead to good discussions. Questions are the place where good thinking happens.”

Parkins’s teaching can be unconventional. Over the years she has incorporated yoga, meditation, drama, and self defence into her classes.

Parkins joined UBC Okanagan in 2007 after teaching at Trent University and Nipissing University in Ontario, and earning her MA in Women’s Studies and PhD in Social and Political Thought at York University.

Her research interests include fashion and dress; a topic she examines in her book, Poiret, Dior and Schiaparelli: Fashion, Femininity and Modernity and in Cultures of Femininity in Modern Fashion, a collection of essays she co-edited.

“I found that the ways the designers present themselves, and the way they present women and femininity, are full of deep contradictions. For example, often the women were muses or inspirations, while at the same time portrayed in a negative light, such as irrational, for their fashion choices and orientation.”

When people dress in a particular way they express their identity and send a message to the world, Parkins says. Their need to be seen as an individual, distinct from others, is a recent phenomenon that emerged in the last 200 years.

“We live in a world that is obsessed with self-fashioning and that work is a way of seeing that you affect the world and the world affects you; that you live in dynamic interaction with the world.”

Her current research is firmly grounded in the interwar period of the 1920s and 1930s. When women of the “Roaring Twenties” started to show a little more leg, images of free-spirited flapper girls entered popular culture. Today, with the popularity of social media, she says images of women’s bodies are even more prevalent.

“I’m not trying to demonize (women’s portrayal on social media), I’m just trying to understand it and take it seriously, because this kind of thing gets dismissed a lot, and I think it’s important to recognize that when we dismiss it, we’re often dismissing women and telling them they are trivial and superficial.”

—by Anne-Rachelle McHugh
with files from Jody Jacob