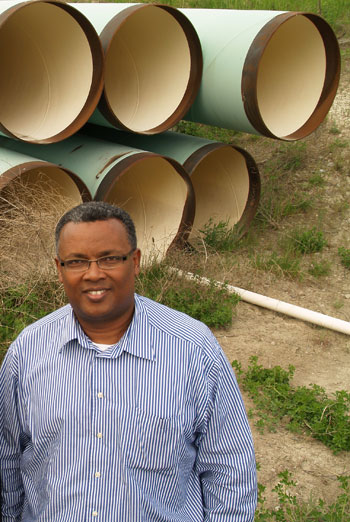 A recent UBC study could make it easier for oil and gas companies to prevent pipeline failures.

This study, conducted at UBC’s Okanagan campus, has resulted in an engineering model that could help the companies determine which areas of their pipeline network could be prone to corrosion and should receive priority for integrity testing.

“There are over 40,000 kilometers of pipelines operating in Canada alone and deciding how best to schedule and complete testing on those lines can be a daunting task,” says Assoc. Prof. Solomon Tesfamariam of UBC’s Okanagan campus. “We believe that inputting the appropriate data into this model will allow companies to identify and test the areas of their pipelines that would be most likely to fail.”

Tesfamariam’s pipeline inspection model combines numerous corrosion and pressure failure assessments, which to date have been largely considered in isolation. The result is a single, flexible tool that allows oil and gas companies to more easily estimate the probability of internal pipe corrosion and the associated risk of pipeline failure.

As part of his ongoing research, Tesfamariam is now working on expanding the model to include external, environmental factors that could result in weak sections of pipelines being prematurely compromised and their contents spilling into the environment.

“At this stage, it is well known to researchers that factors such as climate change and earthquakes that are being induced by current fracking methods are having an impact on sensitive infrastructure,” says Tesfamariam. “For the next stage of this research, we are looking at how both internal and external risk factors can be considered in tandem to give companies a better chance at predicting and mitigating risk.”

Tesfamariam’s study was recently published in the Journal of Loss Prevention in the Process Industries.