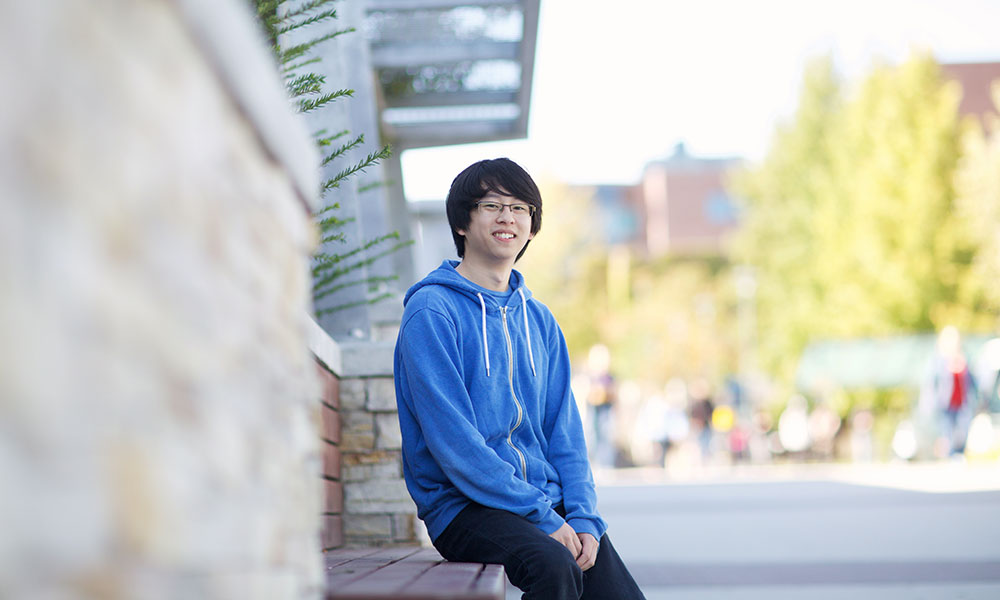 Education
Bachelor of Science (in progress)

“By far the largest challenge I’ve overcome is improving my work ethic. The standard for excellence UBC expects has inspired and motivated me to challenge my own limits.”

LONG BEFORE HE BECAME AN INTERNET PHENOMENON, Eric Huang knew he wanted to be different.

Born in Taiwan but growing up in Burnaby, BC, Huang looked to UBC’s Okanagan campus as a chance to stand out instead of being lost in a larger crowd. The change of scenery would allow him to see more of Canada while experiencing independent living at a more reasonable cost than on the coast.

“UBC Okanagan has helped me focus on my path and realize where my true interests lie,” he says. “By far the largest challenge I’ve overcome is improving my work ethic. The standard for excellence UBC expects has inspired and motivated me to challenge my own limits.”

Beyond finding his calling, Huang says UBC Okanagan has given him opportunities that would be hard to come by anywhere else.

“UBCO has provided me with interesting and novel research options, supported by an excellent educational backbone on which I can rely. My professors are personable, approachable people who take a genuine interest in my success.”

One morning during his first year of studies, Huang, then just 18 years old, woke up amazed to find more than 100 messages on his cellphone. As he had many times before, Huang had helped a high-school student solve a computer-programming problem that the student had posted to Reddit.

Hundreds of comments were voiced in response to how Huang had helped the student. Moving beyond just answering the question, “Kristler” (Huang’s Reddit identity) helped “a high school student to think like a programmer instead of doing his homework for him,” as one user observed.

His ability to explain the intricacies of computer programming made him an overnight sensation on Reddit, which also led to a feature article on the homepage of the influential business website Forbes.com.

As Huang told Forbes, a research-based teaching career is his dream job, second only to a career with the Valve Corporation, an entertainment software and technology company.

Now in his third-year at UBC Okanagan, Huang works as an undergraduate teaching assistant and recognizes how valuable the experience is. “Being able to help students address their concerns, and to facilitate communication between students and professors helps my own education. I truly believe there’s no better way to learn material than to teach it.”

Huang says his role as a TA has improved his own public speaking and communication skills. “I am passionate about helping newer students pick up the challenging task of programming. I’m constantly thinking about how to better present the material to students in a way that helps improve their understanding.”

Huang received the Award for Excellence in Computer Science in first and second year, which recognizes students with exceptional academic performance and educational contribution.

“UBC Okanagan has provided me with plenty of opportunities in whatever interest or goal I have,” he says, “and for that I thank the excellent faculty here, especially Ramon Lawrence and Bowen Hui for their continued advice and support.”