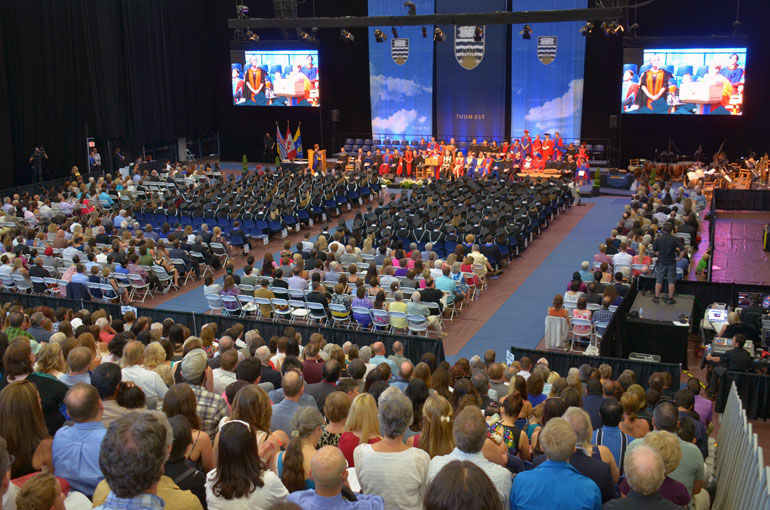 After a year of celebration at UBC Okanagan, the last hurrah takes place this week as the campus recognizes one of its largest graduating classes—more than 1,600 students will cross the stage to accept their UBC degree.

It’s been quite a year, says Deborah Buszard, UBC Deputy Vice-Chancellor and Principal of the Okanagan campus, noting 2016 graduates are part of a special cohort.

“This spring, in rounding out the celebrations marking 100 years of the University of British Columbia, we have the pleasure of admitting the centennial graduates into the Convocation of UBC,” says Buszard.
“Students at the Okanagan campus have the added distinction of graduating during the tenth anniversary year of UBC Okanagan. I offer my warmest congratulations to all graduates and their families on their achievements, and invite them to stay involved in the life of this great institution.”

Along with the awarding of degrees, teaching and student awards, two UBC Centennial honorary degrees will be conferred at the graduation ceremonies. Honorary Doctor of Science degrees will be bestowed on Thursday, June 9 to astronaut Dr. Roberta Bondar and on Friday, June 10 to water scientist David Schindler.

Bondar, a physician and scientist, made history in 1992 as the first Canadian female astronaut and the first neurologist in space when she launched in NASA’s space shuttle Discovery. While in space, Bondar researched the effects that spaceflight and re-adaptation to Earth’s gravity have on astronauts, and she made ground-breaking discoveries in space medicine.

Schindler is an internationally celebrated scientist who has led efforts to protect freshwater resources in Canada and around the world. His groundbreaking research has alerted governments and the public to the environmental effects of pollutants and climate change.

Students from across UBC’s faculties, schools and College of Graduate Studies will be conferred undergraduate, master’s and doctoral degrees in five ceremonies during spring convocation, all taking place in UBC’s gymnasium:

The Rose Ceremony is marked by the School of Nursing’s presentation of a red rose, symbolizing respect and appreciation, to each nursing graduate. In addition, this year the inaugural Community Rose will be presented by graduate Jacklynne Girard to celebrate community healthcare partners.

Since UBC Okanagan opened its doors in 2005, more than 12,000 degrees have been conferred, starting with the inaugural graduating class of 468 in 2006.