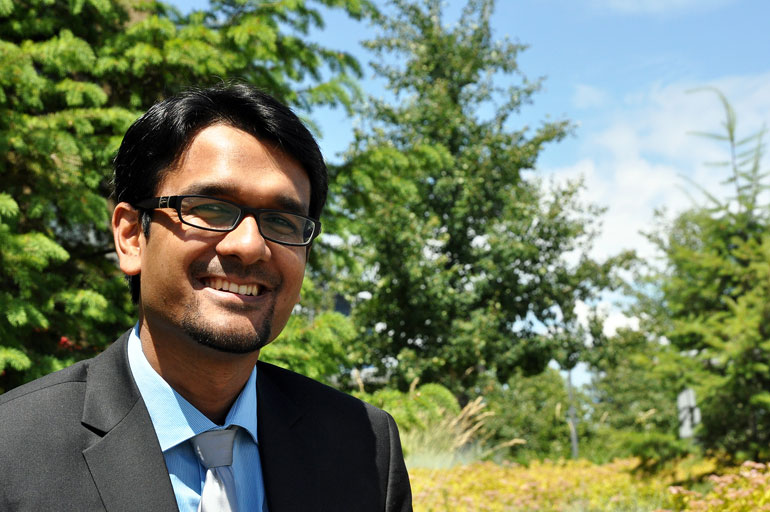 UBC’s Muntasir Billah has won the 2016 UBC Governor General’s Gold Medal—recognition reserved for the student with the highest academic achievement in the College of Graduate Studies.

Described by his supervising professor as the most brilliant student he has ever encountered at UBC, AHM Muntasir Billah has spent the past few years distinguishing himself at the university’s Okanagan campus.

As he celebrates the completion of his PhD during convocation ceremonies, he will also be awarded one of Canada’s most prestigious academic awards.

Billah has won the 2016 UBC Governor General’s Gold Medal—recognition reserved for the student with the highest academic achievement in the College of Graduate Studies. His PhD research in the School of Engineering focused on the development of design guidelines for highway bridges using smart materials.

“I have the highest admiration for his brilliance, intellectual capability, imagination, and hard work,” says PhD supervisor Shahria Alam, an associate professor in the school of Engineering. “He has accumulated a long list of academic honours and achievements and I feel he is the most outstanding and deserving candidate for this distinction.”

Prior to his master’s and PhD studies at UBC, Billah was an undergraduate and then lecturer in the Department of Civil Engineering at the Military Institute of Science and Technology in Bangladesh, where he earned that university’s top medal for obtaining the highest undergraduate grade-point average in civil engineering.

“I feel extremely honoured and appreciative for receiving this significant award which boosts my confidence and inspiration to pursue my future career as a researcher in academia,” says Billah. “My doctoral research developed a design guideline for highway bridges and I am currently working as a bridge engineer in Vancouver, where I am able to apply the knowledge I gained doing my UBC research to real-world application.”

Also during convocation this week, eight students are being recognized with gold medals for being at the top of their graduating class. Individual awards for heads of graduating classes include: