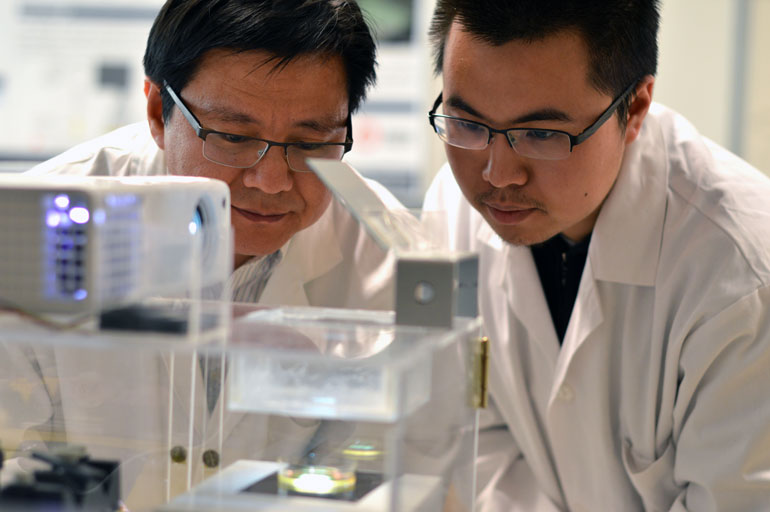 A new technique developed by a UBC researcher could make tissue regeneration cheaper and safer for health-care systems and their patients.

A study, conducted by UBC researcher Keekyoung Kim while at Harvard University, has identified new ways in which proteins and various biological molecules—known as growth factors—can work together to turn cells on the surface into cells that form the middle layer of the heart valve.

“Science has long been working towards ways to minimize or eliminate the rejection risks faced by tissue transplant patient,” says Keekyoung Kim, assistant professor of engineering at UBC’s Okanagan campus. “While the goal of using a patient’s own genetic material to grow a body tissue is still a long way off, this study has moved us further towards that goal.

“This new technique essentially allows us to use less material to study heart-valve regeneration process more quickly and at a lower cost.”

As part of his study, Kim used a microarray (technology that allows various groups of microscopic materials to be “printed” on a slide) to place proteins, growth-influencing biological molecules and simple cells in various combinations on top of a gel-like substance known as hydrogel.

Kim then looked at which combinations influenced the transition of a simple cell into a more complex cell used in heart-valve growth. He found there were specific patterns of proteins and molecules that promoted growth.

“We’re confident this process can be used for other types of tissue, so we are currently in the process of building a microarray in the Okanagan so we can continue testing,” he says.
Kim conducted the study along with UBC researcher Zongjie Wang, ETH Zurich researcher Blaise Calpe and Prof. Ali Khademhosseini of Harvard’s Medical School. The research was recently published in the journal Biotechnology and Bioengineering (onlinelibrary.wiley.com/doi/10.1002/bit.25905/full).