Exercise prescriptions could keep elderly out of hospitals

In a recent study, UBC researcher Gareth Jones concluded that a lack of exercise guidelines for people over 65 years old who were experiencing the onset of frailty limited their ability to manage their health condition. The study also outlined exercise guidelines, the first of their kind, to help slow or reverse the symptoms of frailty.

“Currently, we tend to address frailty with assistive supports and services that can lead older adults to be less active, which can actually accelerate the frailty process,” says Jones, an assistant professor of Health and Exercise Sciences at UBC’s Okanagan campus. “By prescribing the proper exercise, frailty may actually be slowed or reversed, which can keep people out of hospitals and in their homes longer.”

While frailty doesn’t have a common definition, it is often associated with poor grip strength, slow walking speed, weight loss, exhaustion and low levels of physical activity. It is also associated with the accumulation of health issues and accidents such as falls that result in expensive health complications and hospitalization.

Whether a senior is considered frail or pre-frail, or approaching a frail state depends on the severity and number of health issues they experience.

Jones’ study recommends that separate exercise interventions be prescribed for both pre-frail and frail older adults, but both groups should aim to be physically active at least two, if not three, times a week.

The guidelines recommend that both pre-frail and frail seniors complete a multi-component exercise program. Frail older adults should aim to exercise 30 to 45 minutes each session and focus on aerobic conditioning. Those considered to be pre-frail should aim to do 45 to 60 minutes of exercise to improve their lower leg strength and balance.

According to a 2013 Statistics Canada report, there were about 1 million seniors considered frail and another 1.4 million that were considered to be in pre-frail condition. Many more elderly Canadians, according to Statistics Canada, are expected to become frail over the next 35 years as the country’s population ages.

Jones’ research was recently published in the journal Applied Physiology, Nutrition and Metabolism. 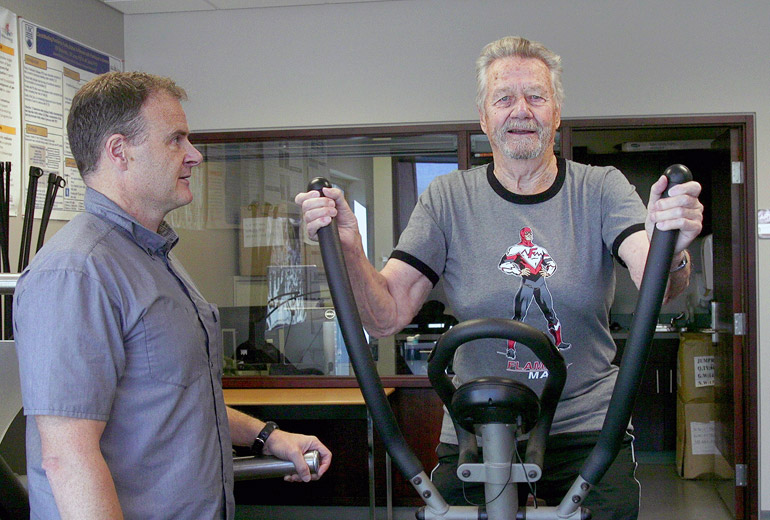 Gareth Jones gives a local resident with some exercise tips to prevent frailty.