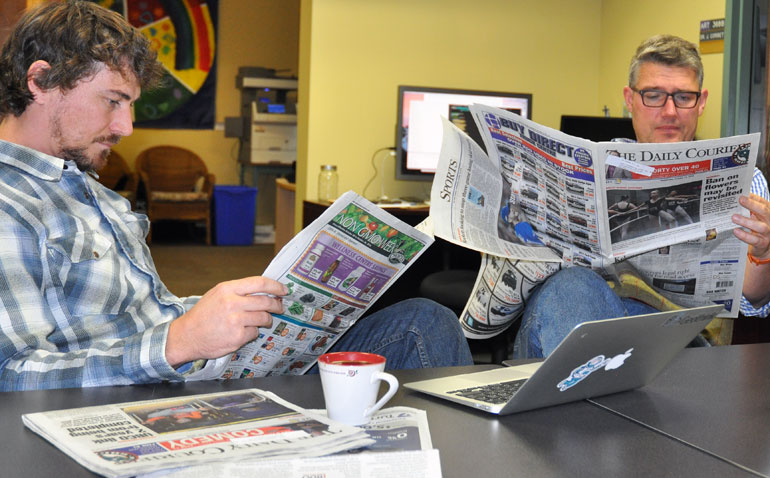 While the landscape of Canadian media outlets has changed significantly during the past decade, a UBC researcher is hoping to keep tabs on exactly what has changed and where.

Assoc. Prof. Jon Corbett has teamed up with Ryerson University’s School of Journalism and Royal Roads University, to work on the Local News Research Project. The goal is to examine the future of local journalism and news sources across Canada.

For his part, Corbett created an interactive map through UBC Okanagan’s Spatial Information for Community Engagement lab. Corbett, who teaches in Community, Culture and Global Studies, says the crowd-sourced map will give people an opportunity to track changes to media—like a small town newspaper closing—and comment on what’s going on.

“There has been a huge transformation of media and the way people are getting their news in the past 10 years,” says Corbett. “We want to know what type of news are people getting, is it from the same source, and is it a credible source? We want to examine the consumption of news across the country and how it has changed.”

The crowdsourcing map launched in June; since then more than 800 people have used it to explore and report changes to local news outlets in communities across Canada. People can add a marker to the site to represent an event like a newspaper shutting down, or reducing the number editions it publishes a week, or even a merger of media outlets.

The map reports on cuts to local news broadasts, the closure of local online, radio, television and newspaper media outlets and the launch of new endeavors. Users can also use it to identify which media companies are scaling back or expanding local news operations.

“This map gives us the best visual analysis of what’s happening in Canadian media across the country,” says Corbett. “There has been a very definite temporal change, and we can see it.”

The map will be used to detect geographical patterns and other trends such as whether certain types of media outlets are closing more frequently than other types.

“We are concerned about local news-poverty,” says Ryerson’s April Lindgren, map co-creator and principal investigator for the project. “People who live in smaller cities and towns, suburban communities and rural areas have fewer options to begin with, and in recent years their choices have become even more limited. Traditional news outlets have been hit by cutbacks, consolidations and closures, while digital-first news sites often struggle to stay afloat.”

Information on the map can be downloaded and analyzed over time. In a recent presentation to the federal House of Commons Heritage Committee, for instance, Lindgren reported that there were 307 markers on the map representing changes to local news outlets across of the country.

The committee is investigating Canadians’ access to local journalism at a time when there are major changes in the news industry.

The map can be accessed at: localnewsmap.geolive.ca