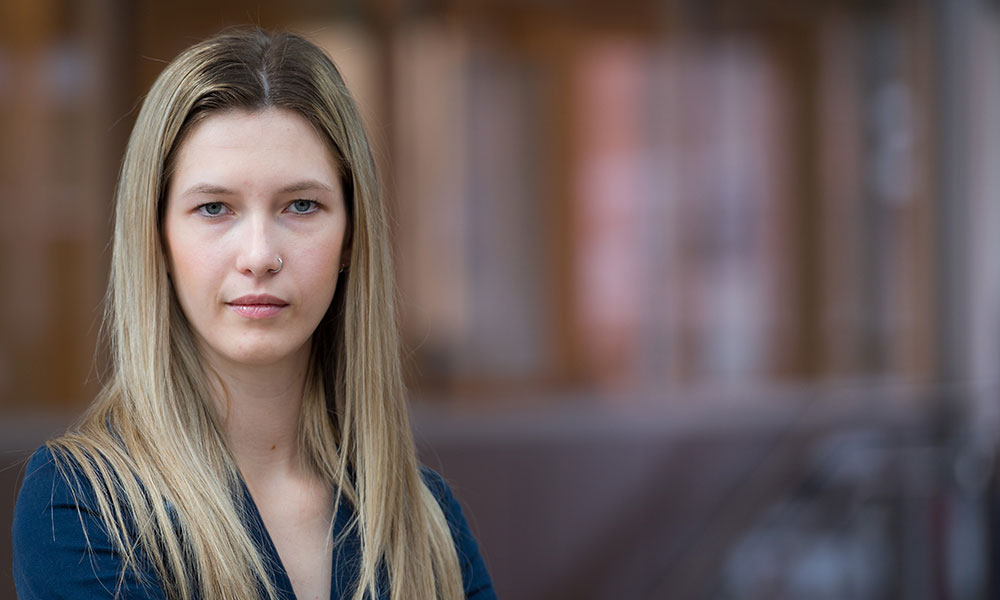 “The Chemistry department and the calibre of its faculty and staff at UBC’s Okanagan campus live up to the University of British Columbia name. It motivates me to work harder.”

FOR MANY, the idea of a cross-country move wreaks havoc on the nerves. But for Alicia Mercer, moving coast to coast from Newfoundland to British Columbia was not only a good life decision, it was an opportunity to get away and plant her own roots.

Armed with two passions—the study of science and the sport of equestrian—Mercer landed in Langley, BC to finish her undergraduate studies in chemistry at the University of the Fraser Valley (UFV), as well as to continue pursuing horseback riding.

It was while presenting a poster at an undergraduate research conference, feeling “scared and hoping no one would ask too many questions,” where she crossed paths with and met her future supervisor Fred Menard, an assistant professor at UBC’s Okanagan campus.

“It was fortuitous. I did not know if Dr. Menard was a conference judge or if he just happened to be there as an attendee,” Mercer says. “He came up to me and started asking questions. He then mentioned he was a professor researching organic chemistry and that we should talk.”

Mercer later emailed Menard inquiring about chemistry graduate studies at UBC Okanagan and to her surprise, or as she views it—her “calling”—the deadline to apply was one week away. Scrambling to prepare an application package, Mercer made the submission and shortly after applying, Menard wrote to let her know that she was in.

“I decided to pursue grad school, specifically working with Dr. Menard, based on his reputation in the field,” she says. “In conversation with my former supervisor, I learned how ambitious and driven he was, and that’s exactly the type of supervisor I wanted to work alongside with. I wanted someone who would challenge and push me to become a stronger researcher.”

Flash forward one year into the program, Mercer is now one of nine undergraduate and graduate students working in the Menard Lab, focusing research efforts on designer chemical probes that help investigate the process of nerve-cell degeneration.

As part of Menard’s team, Mercer is working on the synthesis of a cleaver linker. She uses a lock-and-key analogy for the probe and binding site of the protein.

“My job is to create a molecule that links to the probe and to a tag. Once the ‘key’ is in place, the linker reacts with an amino acid (outside of the lock) and is cleaved. The piece with the probe is free to leave but the tag remains bound to the exterior of the protein’s binding site.

“Now we have a way to monitor that exact site in a cell without perturbing the probes native function.”

If proven successful, it will have the potential to enhance drug discoveries and help treat neurodegenerative diseases such as Alzheimer’s and Parkinson’s.

THE ELEMENT OF HARDWORK 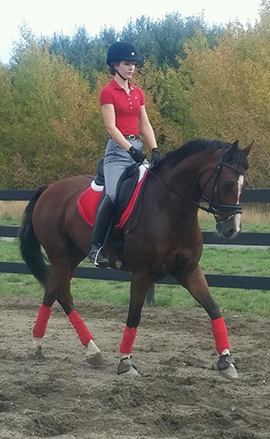 Equestrian training at a clinic in Kamloops.

Mercer is no stranger to working hard. During her undergraduate studies, she juggled a full course load and part-time work on the side to pay for her education and for her horse.

“It hurt me academically working three jobs, but I did it,” she says. “I knew it would pay off in terms of developing a strong work ethic, and I feel it has helped prepare me for the volume of work at the graduate level.”

“Oddly, at this stage of my academic career, I feel like I have a lot more time now, which is completely backwards,” she says, laughing.

Because of the history of the campus and how young it is, Mercer feels a heightened sense of inspiration to pioneer something special with Menard, noting that he has been an incredible mentor and a scientist to model herself after.

“Dr. Menard makes my life look like a standstill. Some mornings, I get to campus at 5 a.m. to start work. Meanwhile he is just getting ready to leave. He’ll go home to have breakfast with his wife, and then come back at 8 a.m. with a smile on his face ready to go and do it all over again.”

“The Chemistry department and the calibre of its faculty and staff at UBC’s Okanagan campus live up to the University of British Columbia name. It motivates me to work harder.”

Mercer recalls the rough start to her undergraduate studies, admittedly “hating” organic chemistry. At the time, she was hoping to find work in an inorganic lab but there was no related research at UFV. “In retrospect, this was because of my lack of understanding from previous schooling,” she says.

“Undeterred by my grades, Dr. Cory Beshara saw potential in me. He later hired me as a research assistant. Without his guidance, I don’t believe I would have made it to grad school.”

Looking back at her academic journey, Mercer recognizes her personal growth in confidence. Having once been afraid to make mistakes in the lab, she has come to learn that trial and error is a necessary evil of the research experience.

“You simply cannot know everything there is to know about chemistry,” says Mercer. “If something does not pan out in the lab as anticipated on paper, I remind myself, what’s the big deal? Let’s make it work. There is absolutely no point in dwelling on it and distracting myself from continuing my research.”

Mercer credits Menard for encouraging her to explore new areas of organic chemistry that she was not necessarily an expert in. Along with praising her supervisor, she also thanks her committee members, chemistry professors Paul Shipley and Kevin Smith for their coaching and guidance.

“My committee is made up of three brilliant chemists who are so good at what they do,” she says. “They understand the material so well and they can teach it to anyone. Their deep knowledge and their ability to bring it down to a level that anyone can understand is a great skill.

“I hope undergraduate students appreciate how good they are at teaching. Because of them, I have progressed immensely as a student and as an independent thinker.”

Though the idea of a PhD is not completely off the table, Mercer intends to go into medicine after completing her master’s degree.

“I did not go right into medicine after my undergraduate studies because I really enjoy research and wanted to do more,” she says. “Hopefully, I’ll get into internal medicine. Diagnostics would be a good fit—it’s analytical and research-based. It would be a natural progression for me.”

Admittedly, Mercer thought it would be difficult to carry on a relationship in school, but her partner has shown her that it’s actually easier getting through the day-to-day having someone there to provide emotional support.

“My fiancé is so supportive of what I do and he challenges me to excel,” she says.

“I would not be able to afford what I am doing right now if it were not for him. I feel incredibly lucky to have such amazing network of support in my life.”