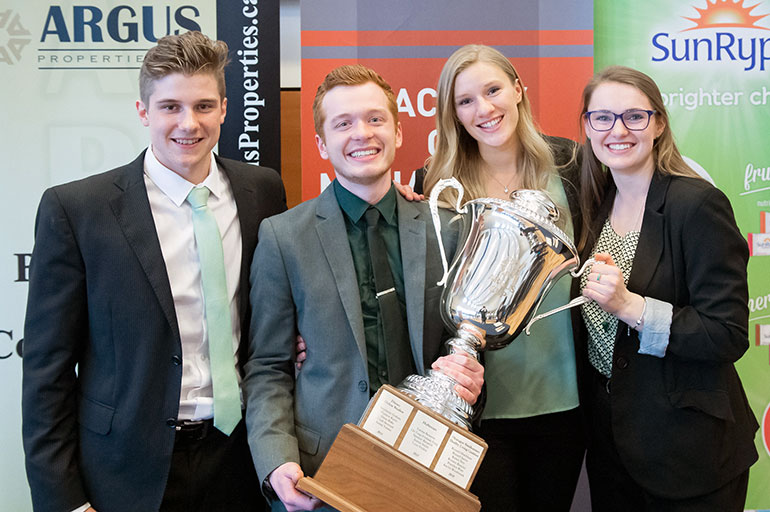 UBC Writer in Residence Renée Sarojini Saklikar unveiled the winners of the 2017 Okanagan Short Story Contest Tuesday night in the Great Room at the Kelowna branch of the Okanagan Regional Library.

The winning author, Karen Hofmann of Kamloops, took first place for her short story “The Island.” Cliff Hatcher, also of Kamloops, placed second with “A Certain Way With Furniture” while Kelowna’s Michael Griffin took third place for his story, “Poppy and Boo.”

“All three stories stayed with me and resonated their own individual strangeness: that quality that marks writing as something worthy of attention, for having been imbued with intention by its creator, crafted to persuade the reader of some urgency,” says Saklikar.

“That quality of strangeness is the highest compliment, that one writer can give to another, so I offer this to each story: commendation for a strange voice, for seeing the world a little off-kilter, in ways that disturb and unsettle.”

Along with the $500 prize money and bragging rights, Hofmann’s story will be published in the Summer/Fall edition of Vancouver-based subTerrain magazine. She also wins a one-week residency at the Woodhaven Eco Culture Centre. Second and third-place winners receive $200 and $100, respectively.

Also at Tuesday’s event, Saklikar announced new developments for the annual contest. For 2018, all three top cash prizes will double and a new category has been created for high school-aged writers.

“There aren’t a lot of opportunities for student writers in the country, but now we have a great crack at it here in the Okanagan,” says Assoc. Prof. Michael V. Smith, who teaches creative writing. “We hope we can make this high school category sustainable, so we can offer it every year.”

The Amber Webb-Bowerman Memorial Foundation is co-sponsoring the 2018 contest, allowing FCCS to award larger winning purses—$1,000, $400 and $200—as well as the new award for the top short story by a high-school student ($200 prize).

The foundation is a Calgary-based registered charity that supports emerging Western Canadian journalists and artists of all disciplines. It offers scholarships in perpetuity at SAIT Polytechnic and Mount Royal University and contributes to the Banff Centre’s Emerging Artists Intensive (Literary Arts) program. The foundation also sponsors the Writers’ Guild of Alberta’s WordsWorth Creative Writing Residency for young writers.

More information about the Okanagan Short Story Contest can be found at: fccs.ok.ubc.ca/short-story