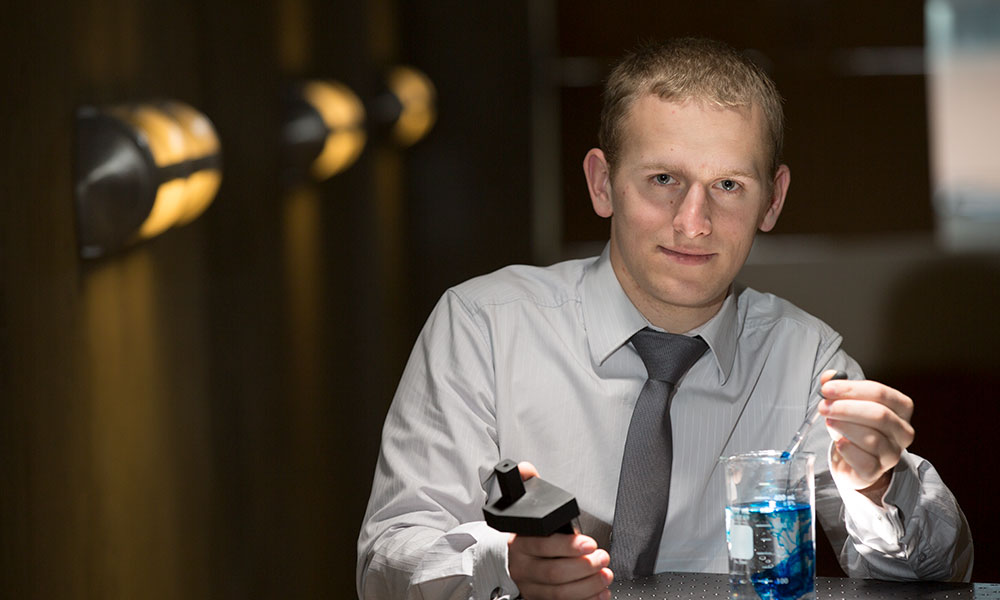 “Sam is an engineer extraordinaire, a natural leader, an excellent teacher, and a young person with a powerful vision.”

AMONG ALL THE REMARKABLE STUDENTS in the history of the School of Engineering, Samuel Schaefer’s name stands out in bold relief.

Over the past five years at UBC’s Okanagan campus, Schaefer turned curiosity, humility, and a talent for tinkering into a portfolio of custom-made technologies novel to the university’s Faculty of Applied Science.

His electrical engineering supervisor, mentor, and friend, Assistant Professor Dr. Kenneth Chau, describes the 24 year old as “an engineer extraordinaire, a natural leader, an excellent communicator and teacher, and a young person with a powerful vision and unlimited potential.”

What really sets Schaefer apart, he says, is the content of his character.

“Sam is always optimistic, even in the face of hardship.”

Chau suggested he try to perform chemical sensing using the electronics inside some dormant CD drives lying around the lab. Having to hack into a closed electrical unit appealed to Schaefer.

As a kid growing up in the small city of Villingen in Germany’s Black Forest, Schaefer would take apart his parent’s clocks and stereo. “I had no idea what the stuff was but I had a lot of fun playing with it,” he says.

Schaefer started Grade 8 in Canada, learning English practically from scratch. After high school in Salmon Arm, BC, he changed Okanagan locales, moving with his family to Kelowna. Despite coming from a family of caregivers—mom, dad, and sister were all nurses, his brother was training to become one, too—he had an aptitude for math and was eager to innovate where science meets technology.

Schaefer says his work at UBC Okanagan was influenced by the desire to make portable, easy-to-use, and affordable technologies to positively impact low-resource regions.

At the outset, however, the idea of converting old CD drives into a chemical sensor smacked of science fiction—well, to the layman maybe, but not to this electrical engineer.

“A $20 CD player may not seem like much but the electronics inside are fascinating,” says Schaefer. “The optical components are absolutely amazing.”

His “eureka moment” came when he looked through the optical lens at a piece of paper, seeing the individual fibres—voila!—instant magnification. Maybe they could turn it into a microscope.

By the end of August 2011, Schaefer & Co. had a microscope that focused automatically and captured images to a computer with surprisingly good image quality.

What’s more, they discovered they could use their device to perform fluorescence microscopy, which illuminates microbes such as harmful bacteria. By switching out the CD drive’s factory LED light source with UV light, bacteria would glow when stained with a colouring reagent.

“That was a highlight,” he says. “Here it was my own creation, and recognition from your peers is always very satisfying. It told me what I was doing was meaningful.”

Then Chau and Schaefer had another idea: make the microscope more accessible by bypassing the computer interface; build a colorimetric sensor and attach it to a smartphone.

Schaefer says, “People were really excited about this idea because it’s something we can all relate to: water quality.”

His fourth-year capstone project was a hit. From UBC’s Applied Science Class of 2012, Schaefer emerged a rising star with new designs on wireless technology.

The eldest of seven, Schaefer was boosted by his family—plus an NSERC Alexander Graham Bell Graduate Scholarship—to the master’s level.

Then Schaefer’s resolve would be challenged like never before.

That autumn August Schaefer, Samuel’s father, passed away. Yet what could have derailed the young student’s MASc journey before it even started, instead, motivated him.

Buoyed by his mother and siblings, and what Chau especially marvels at—the student’s soul, his depth—Schaefer completed the demanding two-year master’s program with flying luminescent colours. He dedicated his thesis to his dad, the inspiration.

It was hard work but a good distraction, with other benefits such as UBC’s entrepreneur mentorship program (e@UBC). “That really taught us to think outside our engineering mind—which is to get the perfect project up and running—and actually go out and see if people even wanted this device. That was new to me.”

Schaefer had designed and built an iPhone 4S attachment, housing electronics and optics, to provide meaningful information about water samples.

Water goes inside a cuvette (a square test tube used for colorimetric analysis) and slides on the iPhone. With the phone’s flash as the light source, Schaefer’s attachment uses mirrors to bend the light, which then hits a grating to break the spectrum into its components. The phone’s camera takes a photo of that rainbow…

The point being, Schaefer’s working device—compact, automated—was different from typical spectral measurement, which can be expensive, bulky, and confined to lab settings.

Schaefer talked to B.C. municipalities. They had sensing technology and little need for a low-cost, portable product. “That was a letdown,” he says, “because we thought everybody would love this device we have.”Why Electrical Engineering?

He visited camping stores, then the pool market. No luck. But the rejection, he says, was one of the best things to come out of the entrepreneurship program.

A full spectrum: from CD drive and microscope, to colorimeter and smartphone app.

“The portfolio of technologies that Sam has achieved at UBC could lay the foundation for a spin-off company,” Chau says. “I currently have several undergraduate students in my lab who have been inspired by Sam and are continuing his legacy.” 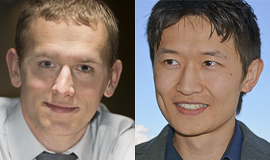 Chau says that Schaefer’s “special ability to build a rapport that transcends the course topic and level” was a big reason he won a 2013-14 Provost Award for Teaching Assistants.

“The students are sort of fanatical about Sam. They adore him for his patience and understanding, his clarity of thought and expression, and his genuine concern for their well-being and learning.”

The young Master of Applied Science epitomizes the capacity of UBC students to change the world from the Okanagan.

After Convocation on June 5, 2014, Schaefer starts his off-campus engineering career at a Metso firm in Kelowna, although he hasn’t let go of his work at UBC. He wants to build the world’s first company to sell a portable, hand-held, automated microscope for less than $100.

“If he is successful,” Chau says, “it will be a huge contribution to society, greatly improving the accessibility of microscopy measurements for the world—in particular, for those in low-resource regions.

“I have little doubt he will achieve his goals and be an inspiration for all.”

A SPECIAL KIND OF ALCHEMY

Creating a microscope from an old CD player isn’t as easy as it sounds.

Samuel Schaefer largely attributes that feat to a simple invitation by his professor, Dr. Kenneth Chau: Go find an engineering problem, then think about all the possible solutions.

Soon they were close collaborators in Chau’s electromagnetics and optics lab, and Schaefer was looking for a summer project.

Chau suggested he look at the electronics inside old CD drives, or else bring in something else that captured his imagination.

“That was really amazing to me,” Schaefer recalls. “Up until that point, school was just teaching you to follow rules—there’s a problem and a solution, and you apply some formulas or concepts—but in his lab, it was different.

Their alliance started in 2010 when Schaefer was a first-year student in Chau’s calculus class. The prof was energetic, fresh from postdoctoral studies at the National Institute of Standards and Technology, an agency of the U.S. Department of Commerce.

“I really loved his way of thinking,” Schaefer says. “Dr. Chau was always questioning whether you could do something that nobody’s ever done before.”

He remembers one day in particular. Chau started class with an idea he had about TV: What if we could design a pixel that changes its shape depending on what you’re displaying on the screen?

“That kind of mentality got my attention,” Schaefer says. “So when he was looking for a research assistant—well, I knew then what I wanted to do.”

Through that collaboration, Schaefer bundled his UBC education with experiences as an RA, student teacher, lead innovator on an award-winning fourth-year BASc capstone project (“Automated, Portable, Low-Cost Bright-Field and Fluorescence Microscope with Auto-Focus and Auto-Scanning Capabilities”), and author of the master’s thesis “Colorimetric Water Quality Sensing with Mobile Smart Phones.”

“The atmosphere in Ken’s lab really motivated me,” Schaefer says. “It was this really wide-open world.”