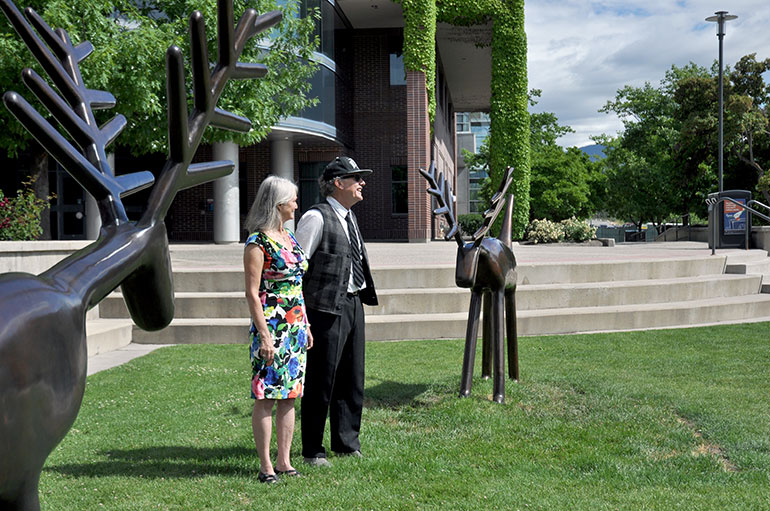 Louise Sidley, left, and David Sidley speak to family and friends gathered after the sculpture “Pair of Deer” was officially unveiled at UBC’s Okanagan campus.

Student’s father creates bronze deer in memory of his son

Two bronze deer now grace the grounds of UBC’s Okanagan campus, a gift that will forever stand as a legacy to former undergraduate student River Sidley.

River died suddenly in 2014 and received a posthumous Bachelor of Science degree in June 2015.

The artwork, “Pair of Deer” was created by River’s father David, a sculptor from Rossland, BC. The family, grateful for the experience their son had at the university, donated the bronze sculptures as a way of commemorating River’s memory.

“In appreciation of UBC Okanagan, and in honour of River, I decided to install these sculptures on the campus,” says David Sidley. “Hopefully, they will be enjoyed for years to come and remind people of my son who probably would have made a name for himself here as well.”

The bronzes, which were conceived in Rossland at the artist’s studio and then cast in Kelowna, were installed in the campus courtyard in time for June’s convocation celebrations.

“UBC Okanagan gratefully welcomes David Sidley’s beautiful artwork to the campus,” says UBC Deputy Vice-Chancellor and Principal Deborah Buszard. “The sculpture is a moving tribute from a parent to his departed son. River felt at home on this campus and we were honoured to choose a prominent location for the work as a reflection of the Sidley family’s embrace of our learning community.”

River’s mother Louise, who received her Masters of Fine Arts from UBC in 2010, says her son had found his life passion at Bamfield and through the award in River’s name the family wishes to honour his life.

“We wanted to carry on River’s potential, and it’s been really meaningful for us because we’ve been able to see the recipients, and we have formed relationships with new students. That’s been very energizing for us,” says Louise. “UBC has been incredibly supportive of us as a family trying to grow and to learn, and it’s nice to keep our connection to the campus with this scholarship and the deer.”

The family ties with UBC are deep and the Sidleys were filled with pride when River’s sister Sage graduated from UBC Okanagan campus in 2016 with a Bachelor of Fine Arts. The family is now in the process of establishing a second award at UBC Vancouver to further honour their son’s memory and support even more UBC students.

“I think our relationship with UBC has helped our whole family deal with our loss because of the legacy we’re able to leave behind,” Louise adds.

The deer were installed into the university’s courtyard, a spot where students and faculty gather for occasions throughout the year. The artwork was officially unveiled on June 16.