PhD or private industry? What’s next?

There’s an art to science for alumna Sydney Acton, who painted her UBC experience with a leadership role for the Chemistry Course Union 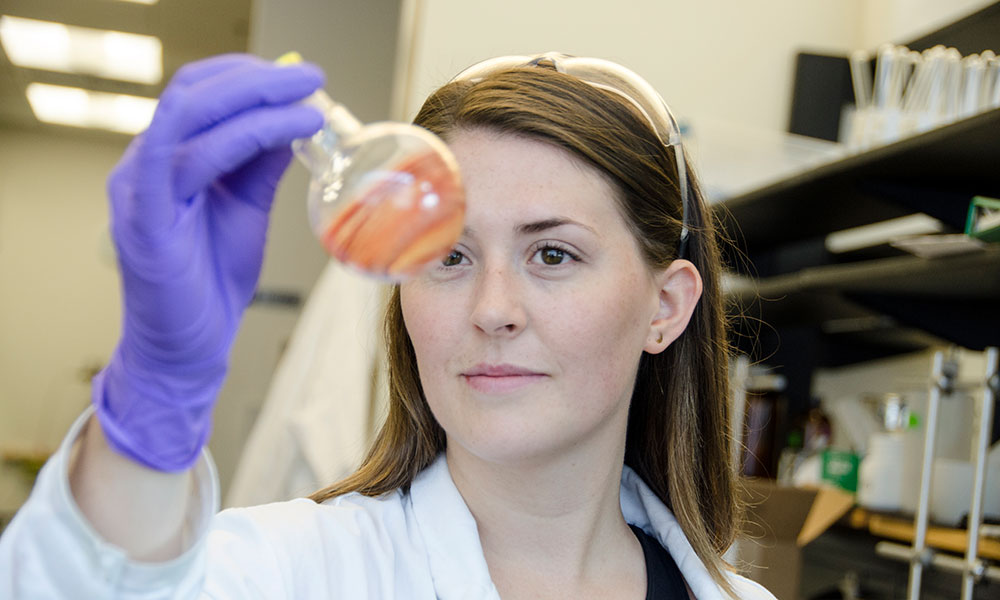 “The allure of making brand new compounds with my own hands that could actually have a real impact in the world one day is really exciting.”

IF YOU ASKED SYDNEY ACTON when she was a young girl what she wanted to be when she grew up, she probably would have said a painter. But as she made her way through high school, Acton found herself falling deeper into the world of science. That made for a tough choice when it came time to decide about her post-secondary education.

“Art has always had a big influence on me—I still do a lot of painting,” Acton says. “When I was thinking about university, I really had to ask myself: Do I choose the artistic or the scientific route?”

Although she decided to pursue a BSc at UBC Okanagan and focus on organic chemistry, that doesn’t mean she bought into the whole left-brain versus right-brain debate.

To Acton, science is visual, and her artistic tendencies are a big reason why she found chemistry so appealing. The focus of her work has to do with the fluorescent imaging of cells, something she’s continued to pursue and specialize in during her master’s studies in Chemical and Synthetic Biology with the Keillor Group at the University of Ottawa.

“I’m really drawn in by the hands-on, problem-solving nature of chemistry,” she says. “The allure of making brand new compounds with my own hands that could actually have a real impact in the world one day is really exciting.”

Acton freely admits that she isn’t the kind of student that has her whole journey mapped out. Initially unsure of what field of science she’d study, some key experiences in her first year at UBC Okanagan really guided her decision.

“The organic chemistry section in first-year chemistry piqued my interest,” she says. “But I think a large influence on my decision was our awesome Supplemental Learning Leader, John Kohout, an upper-level chem major whose passion for the subject made me want to learn more.”

Things really took off for Acton from there. In her third year, she became a teaching assistant—a rare opportunity at many universities for an undergraduate student. She also got involved with the Chemistry Course Union (CCU), first as a tutor, then later as president. She says the extra-curricular work took up a lot of her time, but that’s where her favourite memories were made.

“I was in my groove in the Chemistry Course Union,” she says. “I locked on and went all out with that. I didn’t know many people here so that was a great way to meet others. Getting involved in that totally changed my perspective.”

One of Acton’s key mentors, professor Stephen McNeil, sings high praise for her eagerness to go that extra mile.

“Under Sydney’s leadership,” McNeil says, “the CCU significantly expanded its activities, developed a strong social media presence, elevated the level of professionalism in its organization and management, and developed an ambitious mission statement that aspires not only to further increase its support of UBCO students in the chemical sciences, but also to undertake outreach activities in the local community.”

Now that’s she’s a graduate student at the University of Ottawa, Acton is once again considering her next steps, looking at options and opportunities: Pursue a PhD? Work in the private industry for a while?

The artist/scientist isn’t quite sure, but she’s more excited than scared by those unknowns. Her experiences at UBC Okanagan are a big reason why the move to grad school went so smoothly, and why she is confident in whatever path she takes.

“Academically, I was so well-prepared for grad school because of the work I did at UBCO. The amount of research I did there, and having to juggle that with TA-ing, which is something most students don’t even start doing until grad school. Often people feel very overwhelmed by that transition, but for me, it was natural.”

So, what does Sydney say to others who might not be completely decided on their academic direction?

“My absolute fondest memories from my time at UBCO came from the times I pushed myself out of my comfort zone,” she says.

“Use your time to find the things that really get you going, and make sure to hold onto them when you do. You never know where the next opportunity will come from.”