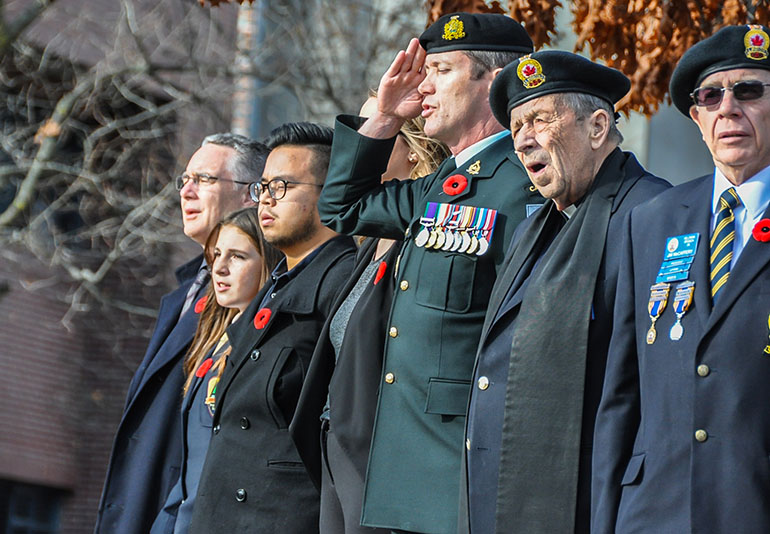 The elderly, uniformed veteran is an iconic image at Remembrance Day. However, it is time, says Lieutenant-Colonel Mike McGinty with the British Columbia Dragoons, that Canadians also pay homage to younger veterans who are often overlooked at this time of year.

McGinty is associate director of Risk Management and Security Services at UBC’s Okanagan campus. He is also an active reservist and commanding officer of the British Columbia Dragoons—the Canadian Armed Forces unit based in the Okanagan Valley.

“There are no veterans left from World War 1 and we have very few left from the Second World War,” McGinty says. “But there are a lot of veterans in Canada, thousands of them. These are the men and women who served in Bosnia, Eastern Europe, Afghanistan and other places. We need to include them in our thoughts when we take time to mark Remembrance Day.”

The British Columbia Dragoons have a long history in the Okanagan Valley. Established in 1911, those were the soldiers who went to Canada’s battles, serving in places like Flanders in WW1 and Italy and Holland in WW2. This year’s Remembrance Day, the regiment has soldiers from the valley deployed in South Sudan and in Eastern Europe.

McGinty retired from the British Army in 2014 and joined the Dragoons after moving to British Columbia. It was while working with them, the lead for a job at the university came up. He applied, stressed in this interview that he was a reservist, and was successful. Now, he juggles the two roles and is thankful the university recognizes his dual duties.

“UBC has known I was reserve soldier since the moment of my application,” he says, explaining not every employer wants to hire reservists as they overestimate the distraction and underestimate the benefit.

“It’s a common misconception for many employers”,” says McGinty. “But if they hire reservists, they get people who are motivated and exceptionally well trained in areas like leadership development. Best of all, they get employees who are getting that training on somebody else’s dime.”

Along with McGinty, there are almost a dozen students and one faculty member currently serving with the Dragoons. Earlier this year, UBC Okanagan was recognized by the Canadian Forces Liaison Council, winning the Provincial Award of Excellence for the university’s support of military reservists who are also employees. The campus won two awards; one at the provincial level and also special recognition at the federal level.

“UBC Okanagan is proud to support employee reservists and to recognize all Canadian veterans on Remembrance Day,” says Deputy Vice-Chancellor and Principal Deborah Buszard. “Reservists bring unique experiences and special skills to their work and I applaud their dedication and that of all veterans to our communities and to the country.”

For McGinty, who was an officer and helicopter pilot in the British Army, there will always be a need for a few minutes of reflection every November. He will speak, in uniform, at the campus Remembrance Day service this week, as he did last year. While he thinks it’s important for the campus community to mark the event, for him it’s also personal.

“Remembrance Day is significant to me because I’ve been to 33 funerals,” he says. “These are people I met through my work, or I was responsible for their funeral arrangements. And at those, I met their grieving families. These are people who voluntarily gave themselves and I truly believe it’s worth us giving up a few hours one day a year to recognize and reflect on their sacrifice.”