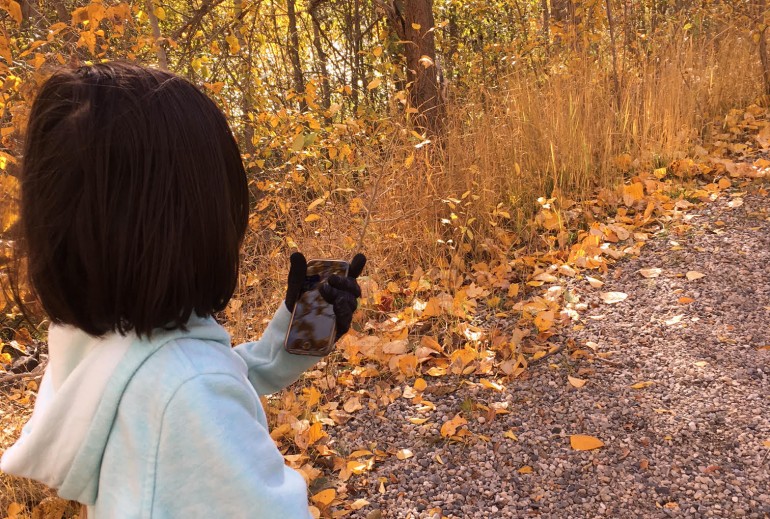 Photo courtesy of Agents of Discovery

It may seem counter-intuitive to many parents, but a UBC researcher says children are able to engage in nature and have fun outside, even with a mobile device in their hands.

Maxine Crawford, a PhD candidate in psychology at UBC’s Okanagan campus, says today’s parents seem to struggle with getting their technology-addicted children outside—without their devices. Indeed, Canadian children in grades six to 12 spend more than seven hours a day in front of some form of screen. But Crawford says all is not lost, and getting children to engage with nature is not impossible.

“Allowing children to use technology when in nature may seem counter-active when the goal is to increase their connection to the outdoors. But many children are already using technology in this way, whether we like it or not,” says Crawford. “Honestly, most children would rather be at home with technology than outside without it.”

So why fight a losing battle, she says. In her recently published study, with more than 740 children aged 9 to 14 from nine different schools, Crawford determined it is possible for children to enjoy and learn about nature while using an electronic device.

For her study, she had three groups of children with different tasks in different recreation areas. One group was to tour a park with an iPad using an app called Agents of Discovery. Another group toured with a trained park educator, the third group with a paper map. Both the iPad group and the park educator groups spent time identifying and discussing their natural surroundings.

In fact, says Crawford, 76 per cent of the children, regardless of group assignment, indicated that they wanted to take better care of the park they had just visited. Their acknowledged commitment to environmental stewardship in conjunction with their significant connection to nature suggests that the students did emotionally connect to their local park.

There was, however, one prominent variance between the three groups.

“One significant difference was how much more fun the children had in the mobile application group,” Crawford adds. “This finding is important as enjoyment is crucial for repeat behaviour and fundamental to place-based education.”

Crawford’s research was recently published in Environment and Behavior and partially funded by Mitacs and the Social Sciences and Humanities Research Council of Canada.