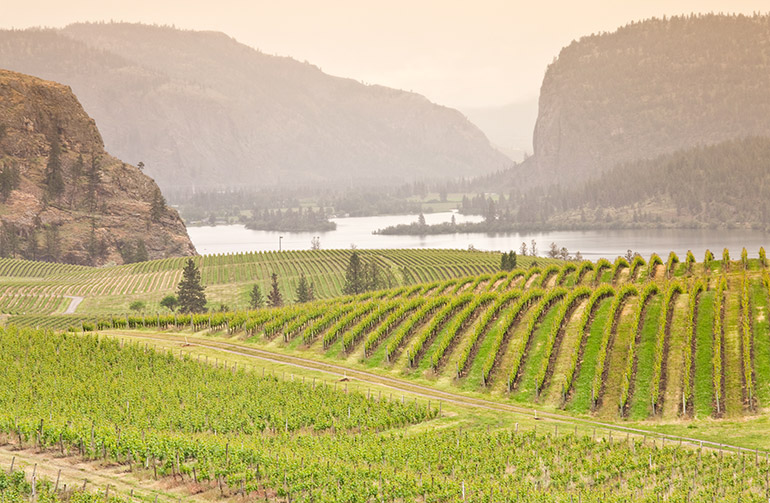 Grape growers have long sought to protect their crops from the effects of wildfire smoke and research from UBC’s Okanagan campus is giving them new insights.

In a recent study, UBC Okanagan researchers and their industrial partner Supra Research and Development examined what happens to wine grapes after they are exposed to wildfire smoke. They determined that volatile phenols—chemicals in the smoke that can give wine an off-putting smoky flavour and aroma known as smoke taint—are absorbed quickly and remain in the grape long after the smoke has cleared.

“The biology of how wine grapes respond to smoke exposure is poorly understood,” says Wesley Zandberg, assistant professor of chemistry. “Winemakers know that grapes grown in smoky conditions can lead to smoky-flavoured wine although the grapes themselves taste normal, and how or why this happens has largely remained a mystery.”

To better understand the process, Zandberg worked with UBC Okanagan PhD student Matthew Noestheden and research associate Eric Dennis to collect samples of Cabernet Franc grapes after exposing them to simulated forest fire smoke. They then tested for the presence of volatile phenols at several time points after smoke exposure and in wine made from the same grapes.

To ensure the experiments mimicked the real world as closely as possible, Zandberg, Dennis and Noestheden were careful to expose the grapes to smoke from locally sourced fuels, including Ponderosa pine and leaf litter from local forests.

“The composition of smoke can vary wildly depending on regional vegetation,” says Noestheden. “For example, Australian wildfires predominantly burn species of eucalyptus and wild grasses, which is very different from what we’d see in western North America. To benefit the local wine industry, we wanted to make sure we measured how grapes were reacting to ‘local smoke’.”

In addition to measuring volatile phenols in grapes over time, the team also tested whether overhead irrigation, a potential strategy to mitigate the effect of smoke exposure on grapes, was effective in reducing their presence.

“We washed the berries to simulate the use of an overhead irrigation system and we were surprised to learn that it didn’t seem to affect the concentration of volatile phenols at all,” says Zandberg. “The good news is that our study provides all the procedures and protocols necessary to test new mitigation strategies in the future. We intend to pursue these with our industrial partner, Supra Research and Development.”

Zandberg also says that they discovered something they weren’t expecting.

While the amount of free volatile phenols that can be detected by taste and/or smell increased in the wine when compared to the grapes, so too did the sugary forms, which are not detectable by taste or smell.

“We expected to see the sugary forms of the volatile phenols decreasing in the wine as the free versions increase, the latter being directly produced by the former, but instead we saw them both increase.” Clarifies Zandberg, “That means something else is going on and the story may be more complicated than we think.”