A UBC student’s research examining the DNA of endangered Galapagos tortoises has led to the highest accomplishment a university student can win.

Evelyn Jensen, who was conferred her PhD degree in biology from the Irving K. Barber School of Arts and Sciences on Thursday, is the Governor General Gold Medal winner for UBC’s Okanagan campus. The Governor General gold medal award is presented annually to the graduate student with the highest academic achievement.

While Jensen’s academic record speaks for itself—she has achieved A+ in all her coursework at UBC Okanagan—she’s done remarkable research in genomics and was able to compare and analyze the genetic makeup of different generations of Galapagos giant tortoises on Pinzón Island, says her PhD supervisor Prof. Michael Russello. 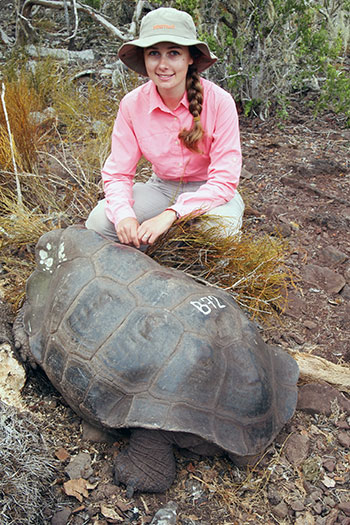 While working on her PhD, Jensen and Russello travelled to the Galapagos Islands to study a new generation of giant tortoises—once a species considered extinct in the wild. Russello explains that whalers, pirates and explorers had used the Pinzón Island tortoises as a fresh meat supply, decimating the population. To make matters worse, the sailors inadvertently introduced a species of black rats to the island—the invasive rats lived on the tortoise eggs, and the survival rate of the tortoise plummeted.

“At one time there were thousands of tortoises and they were easy to hunt,” says Russello. “The species was heavily harvested and black rats thrived by attacking the nests and eating the eggs. It got to the point where there were about a hundred or so of these tortoises left on the island and they weren’t repopulating. They were indeed a population of the living dead.”

More than 50 years ago, scientists introduced a headstart management plan; eggs were transported to a nearby island to hatch and grow in captivity before being repatriated to their home island. In 2012 the rats were eradicated from the island and by 2014, wild-hatched young tortoises were surviving on the island. Pinzón now has a growing population, says Russello, noting it’s a conservation success story that demonstrates how easily humans can decimate a species and how hard we have to work to revive one.

“Written in the genome of every individual are not just instructions for building the organism, but also the history of its ancestors. When populations of individuals are analyzed together, their DNA can tell an even larger story of how the population has changed through time,” Jensen explains.

Jensen and Russello spent two weeks on the Galapagos Islands, collecting DNA samples from the current generation of tortoises so they could be compared with DNA from several tortoises removed from Pinzón Island in 1906.

“The theory regarding the genetic effects of rapid population decline is well-developed, but few studies of natural populations exist where sampling was conducted before and after a known bottleneck event,” says Jensen, explaining ‘bottleneck’ is a term used when a species has gone into a rapid decline. “Such knowledge is of particular importance for species restoration, given the link between genetic diversity and the probability of long-term persistence.”

By pairing historical DNA analysis, and the DNA of Pinzón Galapagos giant tortoises sampled pre- and post-decline, she was able to show that the historical sample provided a valuable benchmark for evaluating the head-start program. The research was recently published in the Journal of Heredity.

“My work revealed that Pinzón tortoises have retained a remarkable amount of genetic variation despite their near extinction, and further demonstrates the effectiveness of the conservation intervention in this system,” she says. 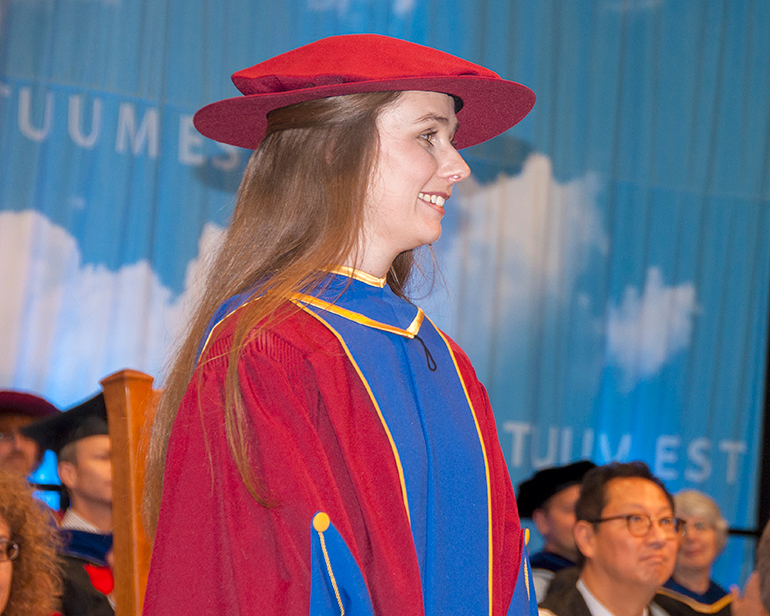 Evelyn Jensen, who graduated this week with her PhD, is the Governor General Gold Medal winner for UBC’s Okanagan campus.