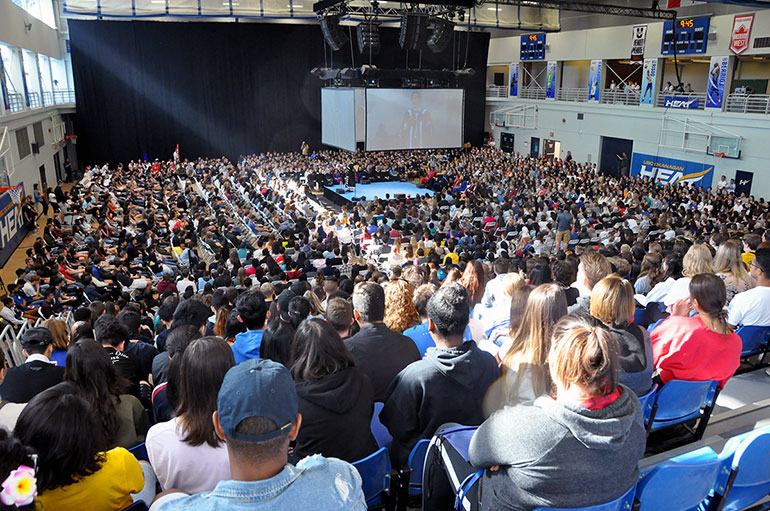 UBC President Santa Ono addresses a packed gymnasium as he welcomes more than 2,400 first-year students to the Okanagan campus.

Early indications show it will be highest number of students ever

With just one look at UBC Okanagan these days, it’s clear the campus continues to grow.

With the construction of the new Commons building wrapping up, and the creation of new roads leading to and from campus, it’s a clear indication of an expanding community. And this year’s student enrolment numbers demonstrate that growth is a common thread throughout the university, says Deputy Registrar Fred Vogt.

“Early indications point to the highest student numbers the Okanagan campus has ever seen,” says Vogt. “We’re expecting just over 2,400 first-year students in September. We are also seeing continuing students return in very high numbers, suggesting a very positive student experience on our campus. All this leads to an expected student population of 9,945. That’s about 900 more students than we had on campus last September.”

While the enrolment numbers aren’t finalized until mid-September, right now staff and faculty are gearing up for more than 3,680 new students who will be starting programs—including 650 first-year international students. The international student population at UBC Okanagan represents 108 different countries.

“In just over 10 years, the campus student population has almost tripled,” says UBC Okanagan’s Deputy Vice-Chancellor and Principal Deborah Buszard. “An incredible transformation has taken place here and it’s wonderful to see more and more students from across BC, Canada and around the world choosing to study at this campus of UBC.”

“Along with new record highs in enrolment, we see our growing community connections as indicators of success,” says Buszard. “From the new InnovationUBC hub at the Okanagan Centre for Innovation, to the very meaningful contributions UBC Okanagan researchers are making to communities in this region, our collective future grows brighter each year by working together.”

As of September 1, there are 8,996 undergraduate students, 950 students working towards their master’s or PhD degrees, for a grand total of 9,945 students. When the campus opened in September 2005, there were 3,500 registered students. 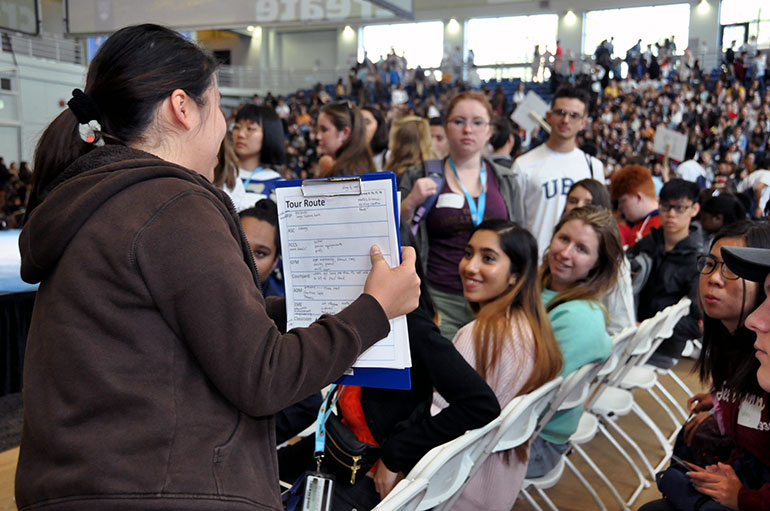 A student volunteer gets ready to take a group of first-year students on a tour of the campus.