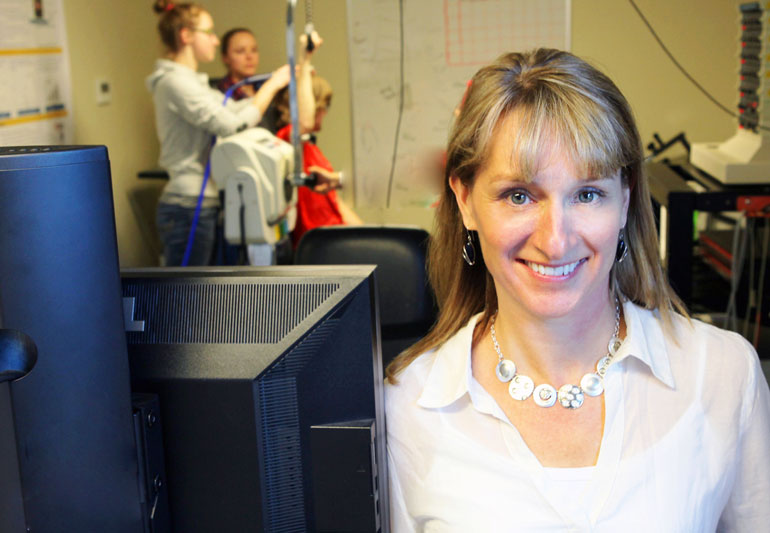 Jennifer Jakobi, associate professor in the School of Health and Exercise Sciences

UBC’s Okanagan campus announced today that Jennifer Jakobi, associate professor in the School of Health and Exercise Sciences, has been named the newest associate chair of Westcoast Women in Engineering, Science and Technology (WWEST).

Jakobi will head the new satellite program, which will be tasked with improving participation of women and other underrepresented groups in the fields of Science, Technology, Engineering and Math (STEM) in the Okanagan.

WWEST is the operating name for the 2015-2020 Natural Sciences and Engineering Research Council (NSERC) Chair for Women in Science and Engineering (CWSE), British Columbia (BC) and Yukon Region, based at Simon Fraser University and currently held by Lesley Shannon.

Jakobi, a professor of neuromuscular and exercise physiology, says that her role will be to further WWEST’s mission to promote awareness and engage students, industry, and the wider community in understanding the value of diversity in the STEM fields.

“There are already dozens of programs and initiatives at UBC Okanagan doing incredible STEM outreach and I hope to build on that solid foundation,” says Jakobi. “I may be based at UBCO but I very much see myself as an advocate and resource for the entire Okanagan; bringing together scientists, educators and industry professionals to achieve real progress in how we support and advance diversity in STEM.”

According to Statistics Canada, in 2011, 66 per cent of university graduates aged 25-34 from non-STEM programs were women; this dropped to 39 per cent for STEM degrees.

While it may be tempting to jump right in with solutions, Jakobi says her first priority is to listen and engage with the community.

“I want to be thoughtful about how we tackle this challenge and I want to create opportunities that respond directly to the needs of the Okanagan,” she adds. “I’ll spend the next few weeks connecting with those who that are already working in this area and host community dialogues to help define what diversity in STEM means to people in industry in our region.”

WWEST created the Associate Chairs program to expand its impact beyond lower mainland BC. Up to three satellite programs will be established at NSERC-eligible institutions in BC and Yukon. The associate chair is a one-year term with an option for renewal.

Shannon hopes this new role will be a hub for the promotion of diversity in STEM throughout the region and sees Jakobi being strongly connected to the other WWEST Associate Chairs.

“Jennifer is a gifted scientist in her own right and her passion for improving diversity in STEM will mesh perfectly with the mandate of WWEST,” says Shannon. “I am thrilled that she’s a part of the team.”

Each of the five NSERC Chairs for Women in Science and Engineering (CWSE) program is regional, with one Chair for each of the Atlantic, Quebec, Ontario, Prairie and British Columbia/Yukon regions.