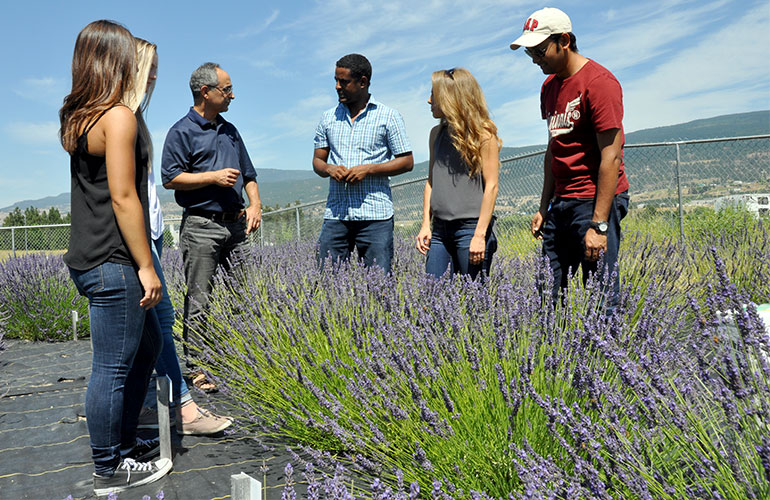 A team of researchers, including UBC’s Soheil Mahmoud, have recently sequenced the genome of lavender.

Mahmoud, an associate professor of biology at UBC Okanagan, says lavender has many uses, from essential oils, to fragrances, personal hygiene and pharmaceutical industries.

“We have studied lavender for a long time,” says Mahmoud. “We have always been curious about this plant. Why is it drought tolerant? Why is it pest tolerant? What makes it smell so sweet?”

The reason why scientists want to get to the root of lavender’s secrets is because it’s an important crop plant that significantly contributes to the multi-billion dollar, and continually growing, essential oil industry.

Thanks to the work of fellow researches, Professor Ping Liang from Brock University and doctoral student Radesh N Malli, the team has sequenced the lavender genome. Basically, creating new pathways to further development and research.

“The best way to describe our findings is that we have built the roadmap for the discovery of the genetic elements that define lavender. Now researchers can follow our map and go into the wilderness and explore even further,” says Mahmoud. “It’s opening the door for more analysis of the plant for its future potential.”

For example, the draft genome helps scientists quickly discover genes that direct essential oil production, to understand regulatory elements that control the expression of these genes, and to learn how the genome works as a whole. Additionally, the genome sequence can help researchers develop genetic markers for ‘fingerprinting’ and identification of various lavender species and varieties.

Mahmoud also explains that the genome sequence can help researchers improve the plant. For example, many high-yield lavender species actually produce some undesired elements such as camphor. Researchers want to learn how to produce the desired oils without increasing the amounts of undesired ingredients. They can do that through targeted breeding and plant biotechnology, but the first step is to have a complete understanding of the molecular elements that control production of the lavender’s essential oil components.

“The quality of lavender’s essential oils greatly depends on the characteristic scent of the oil, which is determined by certain phytochemicals called monoterpenes,” explains Mahmoud. “Camphor contributes an off-odour, and its presence in the oil lowers quality and hence market value. On the other hand, high levels of linalool and linalyl acetate are desired in lavender oils.”

Liang, who is a Canada Research Chair in Genomics and Bioinformatics, works out of Brock University’s bioinformatics and comparative genomics lab. He says the newly-published research provides specific markers other that researchers can follow.

“They now have access to the lavender genome sequence and from here, they can discover more about the plant,” he says. “Given the economic status of lavender and its applications of essential oils in many industries, the lavender draft genome sequence serves as a significant genetic resource for continued lavender research.”

The research, supported by grants from the Natural Sciences and Engineering Research Council of Canada, Canada Research Chair Program and the Investment Agriculture Foundation of B.C., was published this week in Planta, an international journal of plant biology.