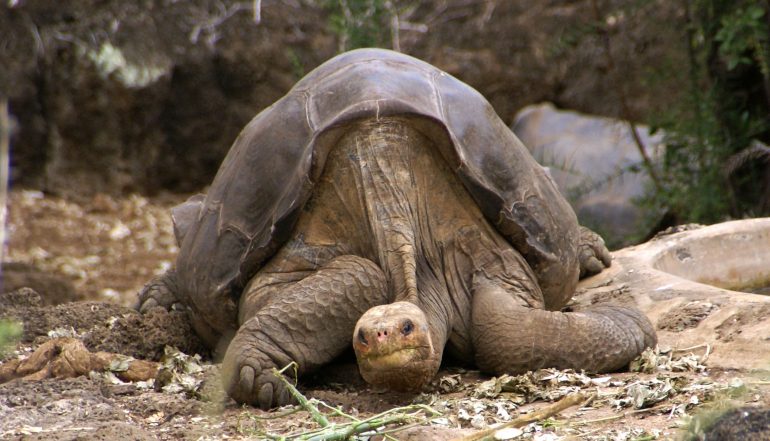 Lonesome George was the famed last representative of a giant tortoise species once found on the Galapagos island of Pinta. Image credit: Mark Putney

Ever since Darwin’s first steps on the Galapagos Islands, understanding the adaptations that offer the giant tortoise its extended lifespan has been a tantalizing scientific pursuit.

And now, new research by an international team including researchers from UBC’s Okanagan campus has used the DNA from one famous giant tortoise to uncover the genes that are associated with their longevity. The discovery provides clues to better understand aging in humans and may help preserve the species, says Michael Russello, study co-author and biology professor at UBC Okanagan.

“Giant tortoises are among the longest living vertebrate animals and have become an interesting model for studying longevity and age related-disease,” says Russello. “Even though they’re one of few animals that can live longer than 100 years, there has been surprisingly little research into the giant tortoise genome.”

To help identify the genes that give the giant tortoise its extended lifespan, the researchers compared the complete DNA sequence from two long-lived giant tortoises. They used samples from Lonesome George–the famed last representative of a species once found on the Galapagos island of Pinta–and from another giant tortoise species found on the Aldabra Atoll, a coral island in the Indian Ocean.

By comparing the giant tortoise genomes with those from other species, including humans, they found interesting variation within genes linked to DNA repair, immune response, and cancer suppression not possessed by shorter-lived vertebrates. None of those genomic variants had been previously associated with aging, offering new avenues for further study.

While individual tortoises have remarkable longevity, Russello says the Galapagos giant tortoises do not, with all living species considered threatened or endangered. He says the results of their study could provide clues into the biological processes and adaptations that gave rise to giant tortoises in the first place, while helping to better protect these animals on the verge of disappearing altogether.

“Lonesome George was a very interesting character in his own right, embodying the plight of endangered species until his death in 2012,” says Russello. “While he inspired many while he was alive, his legacy now lives on through a story written in his DNA.”

The study was published last week in Nature Ecology & Evolution.