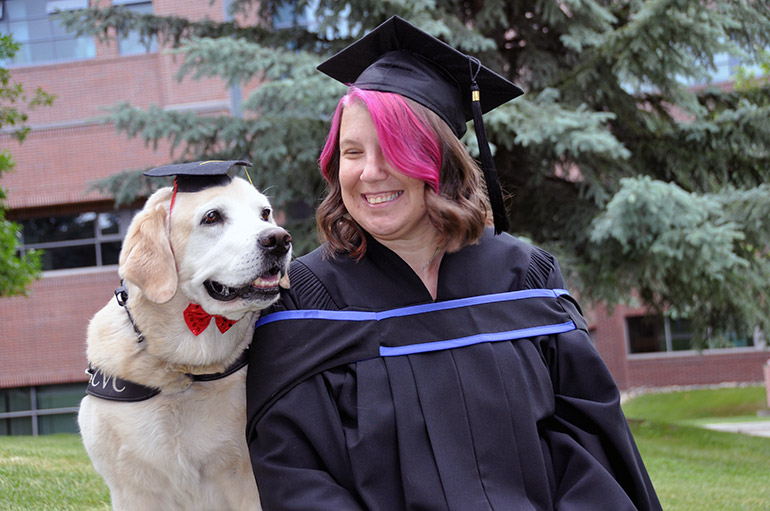 UBCO graduate Kathleen Cusmano and her dog Haven will cross the stage together during the 4 p.m. ceremony Thursday, June 6.

Two students who have the extra challenge of being sight-impaired will cross the stage at UBC Okanagan’s convocation ceremony on Thursday to receive their Bachelor of Arts degrees in psychology.

Many students will agree, earning a degree can be a long and hard journey. This holds particularly true for both Michelle Jorgensen and Kathleen Cusmano, who are a testament to determination and will-power. Despite being visually-impaired, they both obtained good academic standing throughout their programs and see their accomplishments as a stepping stone to helping others achieve their goals.

“The UBCO professors were super encouraging and accommodating with my requests for extra support,” says Jorgensen, who was diagnosed as being legally blind since birth. “The professors okayed my magnifiers (which helped her read), spent extra time with me and buoyed my spirits.”

One who scoffs at perceived limitations, Jorgensen has learned to advocate for herself. Much to her mother’s surprise and joy, and despite the doctors’ predictions, Jorgensen used what limited vision she had to play with toys and get to know her environment. Since then, there has been no stopping her.

These discouragements have added fuel to Jorgensen’s fiery spirit. She learned the three Rs in public school by using her own devices—she brought magnifiers to school and learned to do math in her head.

“I once scored 65 per cent on a math exam because I didn’t show my work,” she says. “When it came to writing the final exam, which was multiple choice, my grade was above 90 per cent.”

Jorgensen applied the same ‘can-do’ attitude to university. She quickly embraced the campus culture, volunteering and joining clubs and wasn’t shy to approach the professors with questions or requests. She also discovered a love for martial arts. Thanks to the support of her jiu jitsu instructor and the gym community, she has risen to the ranks of a blue belt. She has won three gold medals, two silver and one bronze in both judo and jiu jitsu competitions.

“I like to challenge people’s perceptions of me,” she says while standing on stiletto heels and holding her white cane.

Jorgensen is currently employed as a client support worker at NOW Canada, an organization that provides a continuum of care for vulnerable women, youth and their children who have been exploited or are homeless. She agrees that her academic training, especially the forensic psychology classes, prepared her well for her new position.

“Thanks to an understanding of how the mind works, I can better empathize and support our clients,” says Jorgensen.

An interest in human behaviour also triggered Kathleen Cusmano’s application to UBC Okanagan. She too will cross the graduation stage Thursday, cane-in-hand.

“I was so excited about finishing my last classes,” she says.

Unlike Jorgensen, Cusmano lost her sight in her twenties and had to adapt to this change later in life. As she is completely blind, Cusmano relies on her dog, Haven, to help navigate her world.

“She’s such a friendly dog. I spend a lot of time stopping while people pet her,” she says.

Technology has played a key role in Cusmano’s learning as does her assistant Lynn Eileen. Cusmano learns by listening to the professor during lectures, while Eileen takes notes. To reinforce the learning, Cusmano will listen to a transcribed audio version of the notes. Just like Jorgensen, she agrees the UBCO professors have surpassed expectations for support.

“I really enjoy the class environment and energy,” says Cusmano. “The professors have been incredibly encouraging.”

Cusmano’s main challenge has been manoeuvring through the campus and spaces. She and Haven bussed from Vernon to attend classes.

“Learning the material was the easiest part for me,” she says. “Bumping into people, finding the right classes and seats required a huge amount of energy.”

Cusmano has applied her psychology knowledge to working with the Canadian Mental Health Association and has aims to be a personal counsellor.

It’s not uncommon for fresh graduates to offer advice to next year’s students. Both Cusmano and Jorgensen echo each other by saying that any incoming students should seek help when they need it and that pursuing an interest makes learning a pleasure.

“Don’t bury yourself in school work,” says Jorgensen. “Try to achieve a school-life balance. Try out different clubs, even just get a free piece of pizza.”

As more than 1,700 graduates cross the UBC Okanagan stage to receive their degrees this week, they will be joined by two pairs of unfaltering feet and a four-legged tail-wagger. 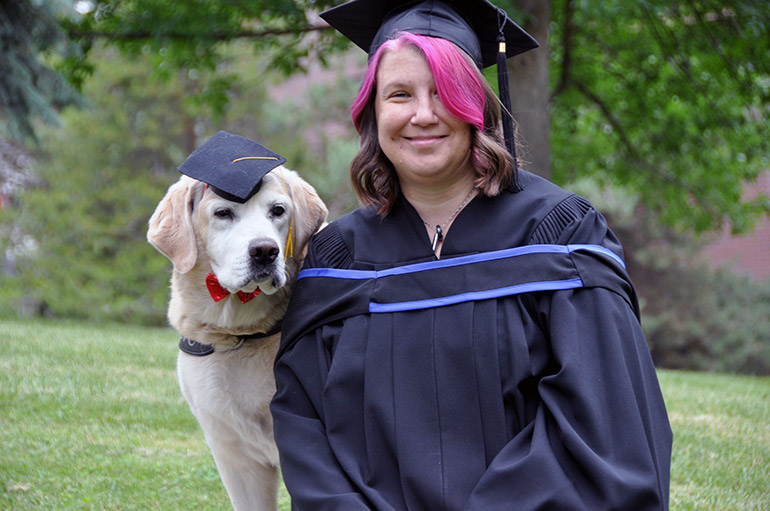