Genetic tagging can be an economical, ethical tool 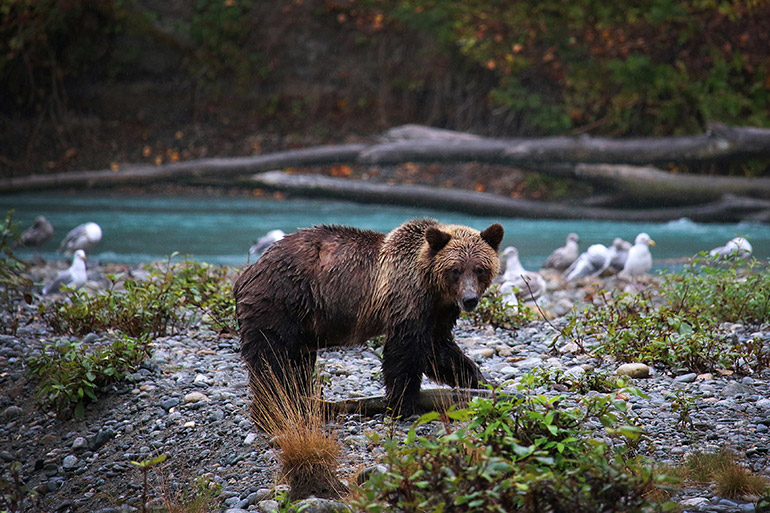 They’re the central questions of ecology—why are there so many species and where are they found?

Over the years, ecologists and conservation officials have experimented with numerous tracking and identification methods in a quest to get the data they need to answer these questions.

Now, in a recent article published in Ecological Applications, researchers from UBC Okanagan and the University of Alberta have found that genetic tagging—tracking individual animals using DNA collected in their habitat—can be a powerful tool in collecting this data.

Described as a non-invasive approach to identifying and tracking animals, genetic tagging uses an animal’s DNA from their feces, saliva and hair.

“This research was motivated by a recognition that this way of doing ecology is really taking on an important role,” says Adam Ford, assistant professor in biology at UBCO and Canada Research Chair in Wildlife Restoration Ecology. “Not only is it cost-effective and logistically feasible, but it checks a lot of the ‘science’ boxes we need to conserve wildlife.”

The team pored through genetic tagging studies from around the world before embarking on a case study in the East Kootenay region of British Columbia. Using data collected from the DNA of grizzly bears, the team genotyped the DNA to identify each animal, and then created individual detection histories over hundreds of square kilometres.

“Using these detection histories, we’re able to get so much information on what’s going on in nature,” says Ford. “We’re using this data to generate density maps, detect trend populations, identify migrants, and individually identify problem wildlife. We can also use DNA to incriminate poachers.”

While Ford believes there’s still a use for more invasive methods like ear tags and collars, he says genetic tagging can offer ecologists some of the same data without the cost, time and stress on the animal.

“Tags work well, particularly for smaller mammals, but you have to capture the animal first, and then somehow recapture it—and do this in a way that’s safe for you and them,” says Ford. “GPS collars are linked to satellites so we know the animal’s location, but again, you have to capture the animal. These collars can cost a couple thousand dollars each and we wouldn’t have the funds to use these in a large study.”

Bears, he says, have a certain behaviour that makes genetic tagging an ideal, and much more natural, alternative.

“Bears scratch their back on what we call ‘rub trees’,” says Ford. “We can identify these rub trees because many bears will rub on the same one—we believe it’s a communication method. We can collect bear hair left on the bark, or on wire that pulls hair off the animal. We return to the tree every three weeks, send the hair to the lab and we know who’s in the area.”

By taking a closer look at measuring tools like genetic tagging, Ford says ecologists will not just be able to describe a trend of the animals, but also understand why numbers are shifting and what they can do about it.

“I want people to know how much information you can get in a less invasive manner,” says Ford. “It’s part of our ethical obligation to conduct research in a way that causes the least amount of harm. This tool is helping us get there.” 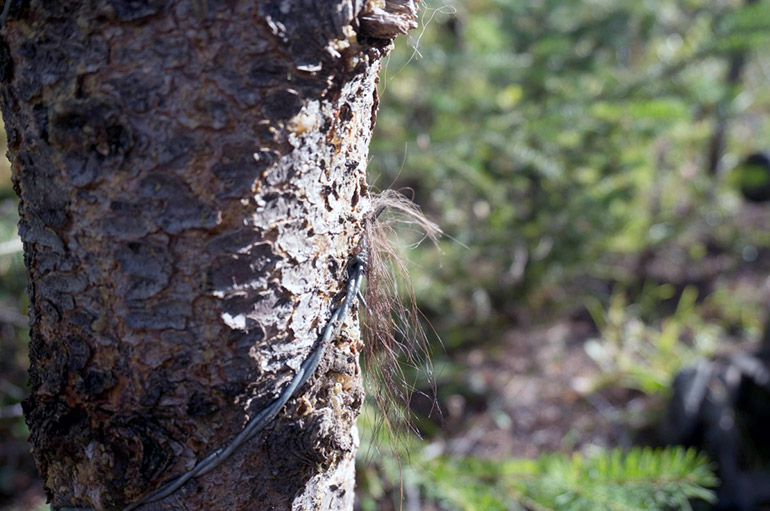 This grizzly bear hair, caught in wire on a tree, can help identify and track the individual animal who rubbed against this tree. UBCO researchers say genetic tagging is an economical and ethical way to keep tabs on wild animals.