Growth continues to be the trend at UBC Okanagan 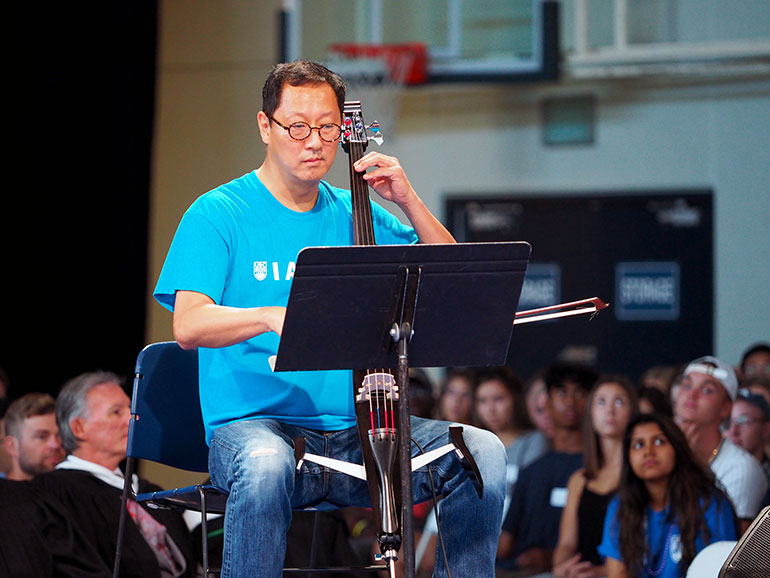 UBC President Santa Ono plays his cello as part of his welcome to the more than 2,300 new-to-UBCO students at Tuesday’s Create celebration.

As UBCO welcomes the incoming class of 2019, it’s obvious the student population continues to grow.

UBC Okanagan’s Deputy Registrar Fred Vogt says, while numbers will change right through September, the campus is welcoming its largest first-year class of 2,347 students. Most of these new-to-UBC students are fresh out of high school, but some—like some of the 133 students enrolled in the School of Education—have transferred from other institutions.

“Every year the enrolment at UBC Okanagan has been increasing, as has our energy, diversity and positive impact on the Okanagan region,” says Vogt. “I believe that every year more people from across Canada and beyond are becoming aware that we offer a world-class education in a dynamic setting in one of the most beautiful locations that can be found anywhere.”

UBC Okanagan opened its doors to students in 2005. At that time, there were 3,500 students and 12 buildings. Today, there are 44 buildings, with two new student residences currently under construction. The growth has been remarkable says Deputy Vice-Chancellor and Principal Deborah Buszard.

“UBC Okanagan’s extraordinary growth is a true testament to the unique experience offered at this campus,” says Buszard. “UBC consistently ranks among the top six public universities in North America. At the Okanagan campus, we deliver a globally recognized education within a tight-knit, inclusive community that empowers our students.”

In fact, she says, the total student population on campus is now well over 10,755 students. That’s including a total of 2,199 international students, 811 of whom are new to campus this year, with 684 taking first-year programs and 127 in graduate programs. Currently, there are more than 1,099 students working towards their master’s degree or doctorate at UBCO.

The student population has increased 8.3 per cent since last year, indicating the need for the new student residences and classroom space.

“It’s been incredible to witness the growth of the campus since we were graciously welcomed to Syilx Okanagan territory in 2005,” she adds. “The close engagement of Okanagan communities has fostered many impactful research collaborations and opportunities for experiential learning, enhancing the student experience while driving innovation and socio-economic development in our region.”

UBC President and Vice-Chancellor Santa Ono welcomed the graduating class of 2023 to campus yesterday, announcing a continuation of the Blue and Gold Campaign, which met its target of $100,000,000 a year ahead of schedule. And he gave the students some parting advice, before playing Don’t Stop Believing on his cello.

“I chose that song because its title is so true. Don’t stop believing in yourself. You can do it,” he told the packed gymnasium. “But remember, balance is the key. Yes, study hard, but also take the time to socialize and to relax. University is a great opportunity to expand your horizons, to try new things. Whatever you do, try to get outside of your comfort zone—for example—as I mentioned, I’m about to perform on a cello in front of all of you. This is outside of my comfort zone to perform in public, but I’ll do it again today in front of you all because getting outside your comfort zone is the only way to gain new experiences and to grow.”