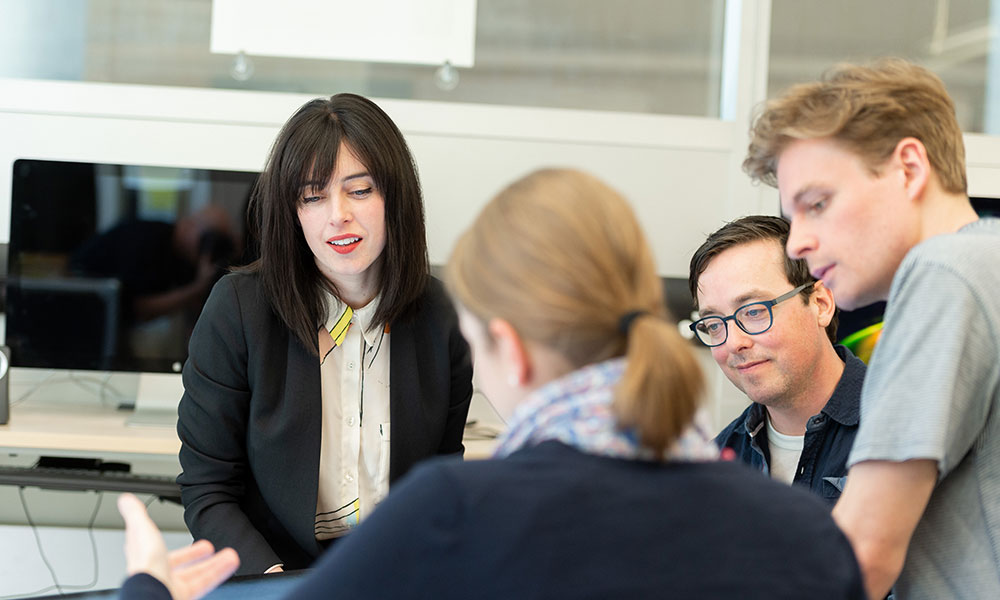 Master of Arts, University of Alberta (2010)

Hometown
Dublin, Ireland (grew up in Victoria BC)

"The thing that ties all of my research interests together is media and cultural memory. The benefits of cultural memory might not be tangible in the way that, say, medical breakthroughs are, but I think that keeping history alive and seeing our own, changing society reflected in it is immeasurably important."

THE PURSUIT OF UNIVERSITY RESEARCH AND SCHOLARSHIP isn’t for everyone. But Emily Murphy couldn’t stay away.

Murphy, an assistant professor in UBCO’s Faculty of Creative and Critical Studies (FCCS), once took a two-year break from academic life, but soon realized she needed to return.

Find out more about Digital Humanities

“I knew that I wanted a career in which I could stay curious and pursue questions that I thought were interesting and important.”

Murphy’s two-year stint in the corporate world happened after she completed her master’s degree. She worked on customer service and marketing writing teams for a tech start-up called Achievers where she produced content, peer reviewed articles, and hosted writing workshops.

Although it sounds like she found creativity outside of the academy, Murphy says the opposite was true.

“I found that I had a lot of time to write and make things while I was working a day-job, but I missed the version of making things that comes with research and writing,” says Murphy.

“I realized that academic work fulfilled a need for imagination and creativity. That sense of imagination is what I continue to pursue in my research. I wanted that to be central to my career instead of just a weekend thing.”

So Murphy started her PhD in English literature at Queens University, completing her studies in 2017. She then immersed herself in a SSHRC Postdoctoral Fellowship at the University of Victoria working with the Linked Modernisms project, a web-based visualization and analysis portal for The Routledge Encyclopedia of Modernism.

Now a professor of digital humanities, Murphy is teaching her primary passion.

In many ways, the field of the digital humanities is still defining itself, she says.

“Sometimes it’s hard to explain what I do — definitely a challenge!” says Murphy. “It also means that I can try out ideas that span lots of different disciplines.”

Broadly speaking, digital humanities looks at how technology shapes the world around us. Researchers in this area analyze data from a humanities perspective, create and study digital objects or data visualizations, and explore new methods for looking into archives across media forms.

THE BEGINNINGS AT UBCO

“I really wanted to come to UBCO because of how seriously it takes interdisciplinarity, even down to the structure of the faculty combining creative practice and critical thinking.”

Murphy definitely has more passions than time to commit to them: literature, culture, fitness, sewing, drawing, and cooking, just to name a few. She approaches each passion in the same way that she approaches her research: full on.

“It’s unlikely I’ll ever let myself get bored when there’s something new to learn.”

Murphy loves how contemporary media and technology push her to challenge conventional ways of thinking about history and culture, in particular, how they unsettle our assumptions about the isolation of individual artists. She says technology becomes a kind of connective tissue among people working to shape culture. 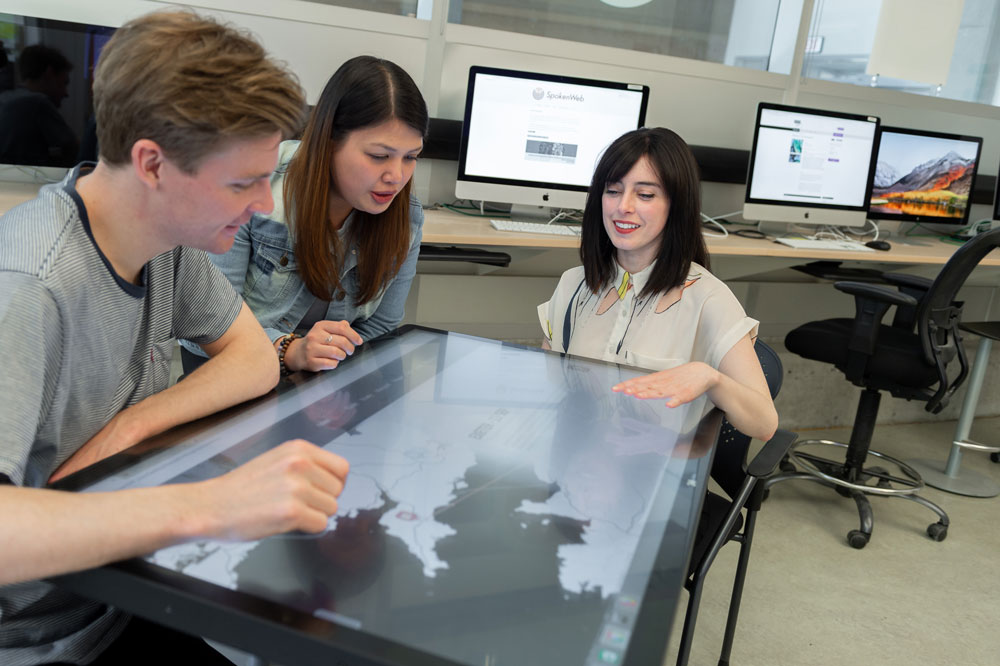 In her research, Murphy pursues ideas through technologies such as linked data, looking at how we can describe culture and the relationships between entities — people, places, things, or events. She will often look at “old” media, and attempt to understand how print, books, or archives shape our assumptions about how culture and community operate.

She is currently working on a data modelling project of an anthology of poems about the occupation of France in the Second World War.

“I am not just interested in studying the finished anthology, but looking at all that was involved in creating the object, especially the vast networks of human relationships that are expressed in the form of letters, previous publications, or edited drafts of poems.”

All of these networks are shaped by the political climate of the times and the media that they are expressed through, says Murphy.

“I hope my research is headed towards more experimentation in research-creation. While I love literature and writing, the real impact I want to make is to further develop methods for research in the humanities that rely on other forms of perception — technological, embodied, visual, textual…,” says Murphy, her voice trailing off almost romantically.

One abiding interest Murphy has recently turned her attention to is information systems for human movement. In the early 20th century, there was a proliferation of notation systems for dance. Many of them attempt to be really comprehensive and authoritative. These notations are much like a music score, recording movement of the body in time, placement of arms and legs, and turning of the head.

Murphy notes that we do not think of dance as being formalized, but rather about being free, so this idea of reading a dance that can be replicated goes against how we often think of dance.

“I’m interested in the idiosyncrasies and specificities of movement notation — as in, how do they model movement?…what assumptions do they make? I’ve begun working with personal records of dance notation in my research as well.”

Just recently, Murphy collaborated with Katherine McLeod, an Affiliate Assistant Professor at Concordia University, to remount a 1930s flamenco performance from choreography notes housed at the Dance Collection Archives in Toronto. The piece used multimedia to show how flamenco dance continues in present-day Canada across different media. Yes, Murphy has a dance background, too.

IN AND OUT OF THE CLASSROOM

Teaching means that Murphy can also support the development of other people’s ideas. Ultimately, she sees her role in teaching as helping students learn how to think, coaching them how to make their ideas convincing and how to bring them to life.

“The exciting thing about teaching is also what challenges me: it’s often as much about the development of the person as it is about the subject matter.”

Asking students to take their learning seriously also comes along with the responsibility of trying to understand what they need from a class or another learning environment.

With her students, Murphy often offers events that welcome an outside audience. In her DIHU 301 class, “The Self-Conscious Text”, students gave presentations on how they produced a collaborative digital edition on the novel Dracula. The novel is largely about media and technology — characters are frequently recording themselves on phonographs, sending telegrams, and transcribing and compiling documents. Putting this into a digital context makes a lot of sense. 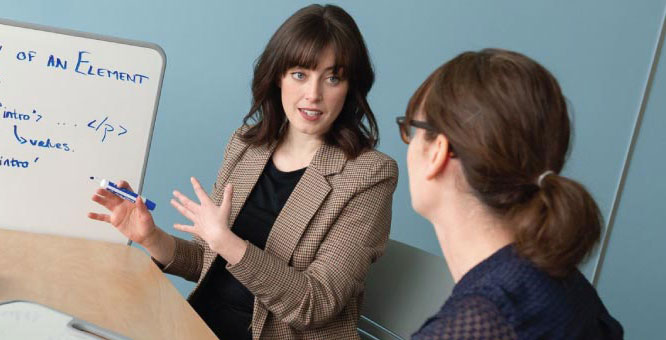 “I was really proud of the quality of work they produced. This book provides a rich ground for students to examine both their own manipulation of text and their relationship to media.”

This fall, Murphy is working with colleague Karis Shearer, an associate professor in FCCS, to give students the opportunity to work on digital research projects at the University of Exeter, which includes a two-week visit to the university. Students will be able to connect with research teams in the UK, broadening their learning and research experiences.

Connections such as this, and UBC Okanagan’s growing research profile, inspire Murphy’s work.

“UBC is one of the few universities in Canada that is actively growing — it makes it such an exciting place to work! Lots of my fellow professors are young and energetic; as the community grows, researchers, students, and staff have a really unique opportunity to shape what kinds of research gets done and the impact that it can have. I feel lucky to be part of this community.”