“The time to act is now” 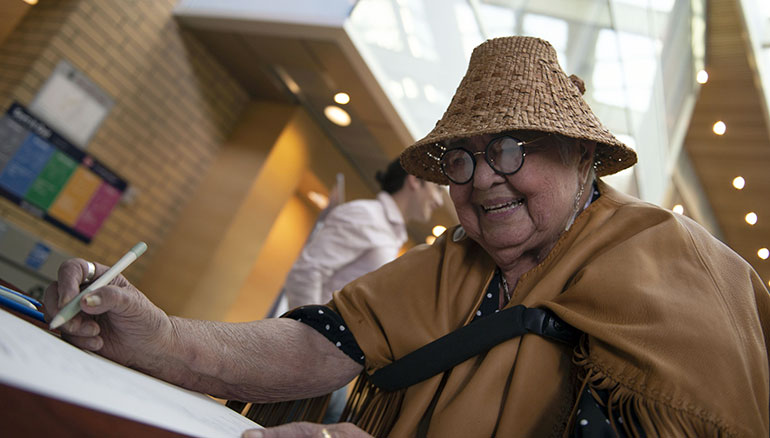 Shuswap Elder and UBCO Community Research Liaison Jessie Nyberg signs as a witness to the declaration of Truth and Reconciliation commitments at a special ceremony Tuesday.

Elders, chiefs and community members from throughout the Syilx Okanagan Nation joined with students, faculty and staff at UBC Okanagan Tuesday to witness the historic signing of UBCO’s commitments to action toward reconciliation with Indigenous peoples.

As part of the University of British Columbia’s response to the Truth and Reconciliation Commission of Canada’s Calls to Action, the UBC Okanagan declaration specifies action on five recommendations developed by its Aboriginal Advisory Committee.

“In making this commitment to the Calls to Action, UBC is taking an important step,” notes Grand Chief Stewart Phillip, Chair of the Okanagan Nation Alliance. “Indian residential schools were purposely designed to ‘take the Indian out of the child’ by destroying Indigenous languages, cultures, and connections to our lands.

“The time to act is now. The steps that UBC is taking will strengthen the collaborative relationship between the university and the Syilx Okanagan Nation,” says Phillip.  “They will make meaningful contributions to supporting Syilx students and scholars, increase intercultural understanding, and over time, they will enrich the future for us all.”

UBC President and Vice-Chancellor Santa Ono says UBC is deeply committed to collaborating with Indigenous peoples and communities to address the legacy of colonialism, and to co-develop knowledge and relationships.

“The Okanagan campus is at the leading edge of this effort through its foundational partnership with the Syilx Okanagan Nation and its commitments to access and success for all Indigenous students,” said Ono.

“Since the beginning of this campus, UBC has enjoyed the support, friendship and warmth of Syilx people and communities, it is a blessing and an invaluable privilege. Going forward we recommit to working towards reconciliation and better serving the Syilx community. I am personally deeply grateful to be a part of this unique partnership and place,” says Deborah Buszard, UBC Deputy Vice-Chancellor and Principal of UBC Okanagan.

“We will be forever grateful to be welcomed in Syilx Okanagan territory and to partner with the Okanagan Nation on education,” Buszard said. “UBC Okanagan will uphold its commitment to support Indigenous students and scholarship long after we achieve the Truth and Reconciliation actions to which we commit today.”

Information about the declaration and commitments is online at: ok.ubc.ca/trc 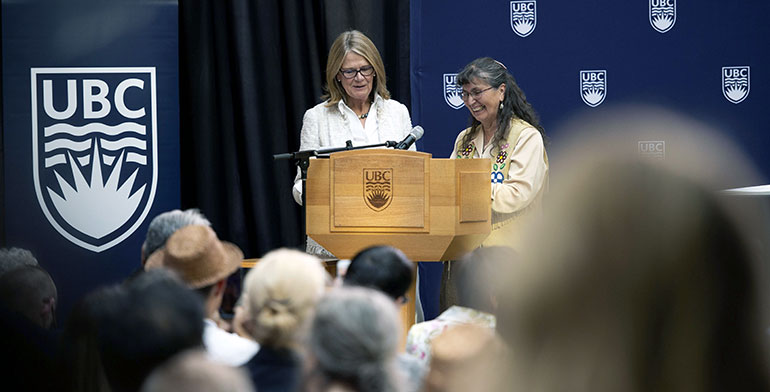 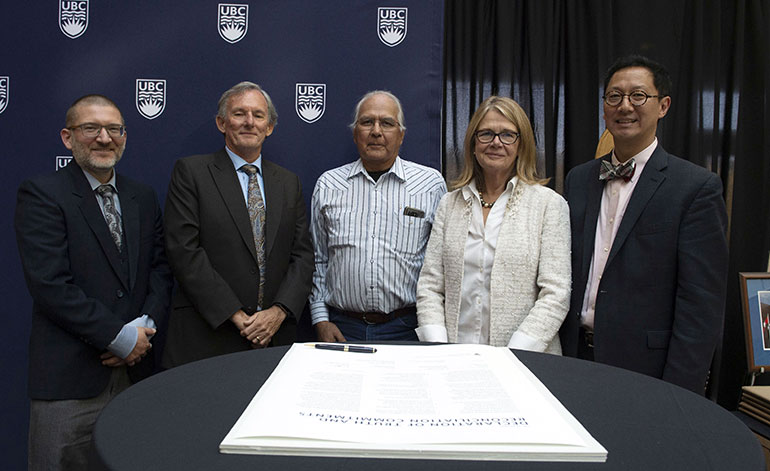