UBCO lecturer shares his enthusiasm for all things arachnid

Fake spider webs and eight-legged creatures decorate many homes this time of year. While living, breathing spiders may cause spine-tingling shivers for some, UBC Okanagan spider expert Matt Nelson says that this fear is misplaced. Despite commonly held beliefs, the biology lecturer with the Irving K. Barber School of Arts and Sciences says spiders rarely bite and are essential players in our world’s ecosystem.

Can you explain your fascination with spiders?

As a kid I was a rock-turner—I loved flipping them over to see what was underneath. And almost always, I found spiders.

There are more than 45,000 species and they range in size from the micro to macroscopic, with some reaching the size of a football. They are amazingly resistant to environmental changes like heat and drought, and have adapted to every terrestrial ecosystem, except that of Antarctica. Some of their fellow arachnids even reside on humans, they are commonly found on people’s eyebrows.

How important are they?

We can’t live without them. Spiders eat insects. I would say that is their primary role. Some, like the Okanagan’s native sheet-web spider do this through passive hunting with their funnel-shaped webs. Others, like the wolf spider, actively hunt. Spiders also kill other spiders, sometimes even their own mate. This helps keep their own numbers under control. Also, spiders are an important food source for other animals, including birds, lizards and other insects.

We’ve all heard of ‘spidey sense.’ Is that a Hollywood fiction?

It’s true, some spidey senses exist. Spiders have tiny sensory hairs all over their bodies that are like extensions of their bodies. Some detect, or feel, vibrations while others are chemo-sensory and can detect smells. This can give them an ability to sense their environments beyond anything that humans can.

Do they have any other qualities (other than scaring folks)?

Spiders have many other amazing abilities. For example, they have multiple eyes. This varies between two to eight, depending on the species. Not all eyes are image forming, some just ‘see’ light. The jumping spider, however, has eight eyes two of which are image-forming, can see colour and track motion.

Many spiders can even defy gravity. The tip of a spider’s leg, called the tarsus, has tiny hair-like structures, which can grip onto the irregularities of almost any surface.

Do all spiders have fangs?

Almost all spiders have fangs that are venomous. Yet, very few are dangerous to humans. In fact, there are more dog bites yearly, than those from spiders. They are actually pretty chill. They don’t want to bother you and really won’t bite unless provoked.

How can we rid our houses of spiders?

If there are spiders in your house, they are there for a reason. They are eating something, perhaps insects? I would caution against using pesticide, which may affect non-target species. The same strategies that you would use to energy-proof your house, will keep spiders out. For example, make sure there aren’t cracks in your doors and close your windows properly. If you see a spider, put it into a jar and take it outside. 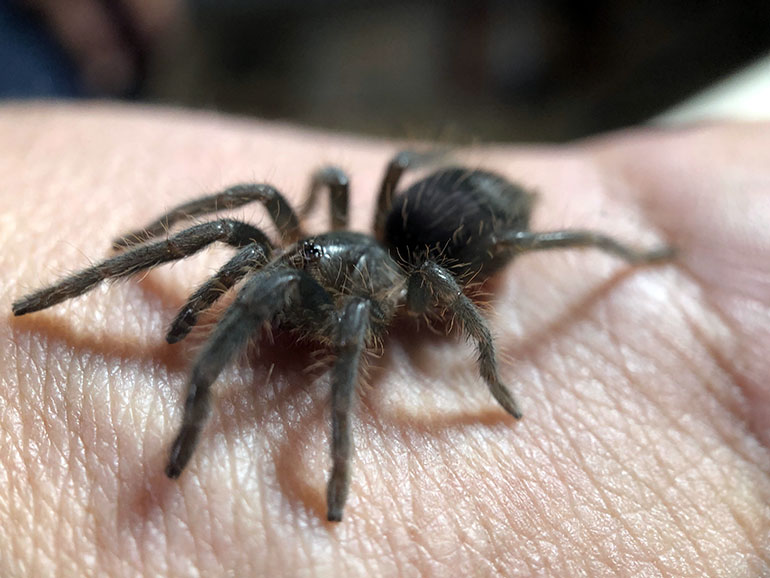