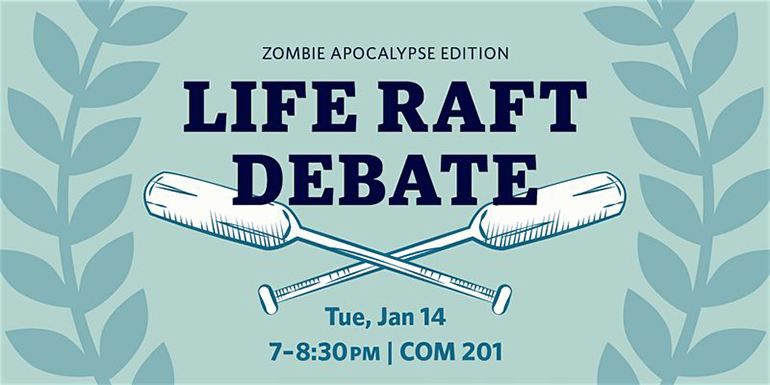 For many, the question of who to bring along in order to rebuild human civilization during a zombie apocalypse has gone unanswered for too long. Now, six UBC Okanagan professors, all from different fields of expertise, aim to settle the issue once and for all—or at least until next year—as they prepare for the second annual Life Raft Debate.

For event organizer and chemistry undergraduate student Jesse Lafontaine, the premise of the debate is simple. The audience is the last of humanity to survive a zombie apocalypse and there’s only one seat left in their life raft. Which UBC expert should they pick to join them and why?

“The concept is definitely absurd,” jokes Lafontaine. “But it’s also refreshing and entertaining to hear very accomplished UBC professors explain their expertise and argue how their work would help human civilization recover from such an unlikely disaster.”

Lafontaine adds that the lighthearted nature of the debate is what makes it so compelling while at the same time helps translate complex areas of study into something fun and accessible to everyone.

“As university professors, we’re used to speaking to students who are already interested in our fields of study,” says McNeil. “Defending the power of chemistry to a room full of people who probably aren’t as passionate as I am about organometallic reaction mechanisms is certainly humbling.”

He adds that offering this unique twist on academic debate is a great way to help people discover how different points of view and areas of expertise each make essential contributions to human society.

“Medicine keeps us healthy. Engineering builds the tools we need to survive. Anthropology understands how other cultures survive and thrive. Art is what makes us human in the first place,” he says. “It’s difficult to defend and advocate for just one.”

Lafontaine is quick to point out that the debate lineup is more than up to the task.

“We have heavy hitters from our campus this year,” says Lafontaine. “They include, among others, the director of the School of Engineering, who is a formidable engineer and researcher; the dean of the Faculty of Creative and Critical Studies, whose eloquence is unmatched; and the Deputy Vice-Chancellor and Principal of UBCO, who has been in charge of our campus for the last eight years and definitely knows how to win an argument.”

The list of debate participants also includes the role of ‘devil’s advocate’, whose job is to argue that none of the experts deserve a spot on the life raft.

While the topic may be lighthearted, Lafontaine says the debate is classically structured and the participants will make their arguments in earnest, with the audience voting on the winner.

McNeil is returning to defend his title.  The key, he says, is communicating to as broad an audience as possible.

“I’ve been interested in science outreach for a long time,” he says. “But even with that experience, distilling the accomplishments and capabilities of the whole field of chemistry into a five-minute defense is no easy task.”

“My winning argument was that, as a chemist, I know how to take simple molecules and manipulate them into creating something new, like penicillin or steel. But now that we not only need to rebuild civilization but also survive a zombie hoard, I may need to up my game this year.”

The Life Raft Debate takes place on January 14, at 7 p.m. in the Commons lecture theatre at UBC Okanagan. The event is free and open to the public but registration is required at: https://students.ok.ubc.ca/life-raft-debate/