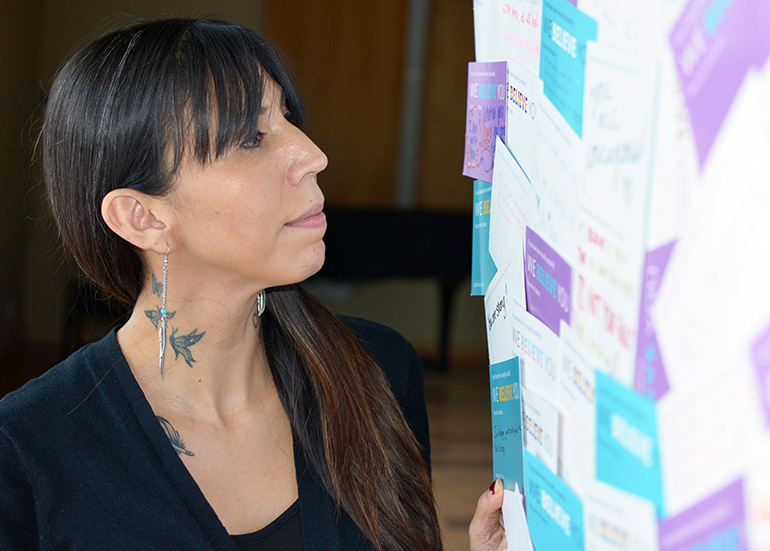 Bachelor of Art student Jamie Stimson reflects on the words of encouragement posted on a sign during a Sexual Assault Awareness Month (SAAM) event in January. Later this month, Stimson will be a featured speaker at the In Honour of Missing and Murdered Indigenous Women event in the UNC ballroom.

From British Columbia’s Highway of Tears to the Maritimes, Canadian women continue to disappear while the justice system chooses to turn a blind eye.

For Jamie Stimson, the fact Indigenous women regularly go missing does not come as a shock as the UBC arts student’s journey took her to the brink of no return during her life on the streets.

“I was living in a tent city in Seattle in a place called ‘the Devil’s playground.’ It’s near the casino area and the track. When I was working on the street, I got locked up in a garage where I was beaten and raped for two days,” recalls Stimson who will be a featured speaker at the In Honour of Missing and Murdered Indigenous Women event later this month. “When I called the cops they said: ‘I thought you (Indian) girls liked it rough.’ And then he arrested me.”

Like many Indigenous women, Stimson is the third generation in her family to suffer from the residual trauma of the Canadian Residential School System. She was born in Calgary, but family life quickly unravelled as her mother was murdered when she was just a toddler. Despite having many foster children in her care, her aunt from British Columbia brought Stimson back to the First Nation community where she was raised.

She immersed herself in sports and was on track to living a normal life when things changed in 1995.

“I was raped in my community at 15 by a 42-year-old Indigenous man. I was told it was my fault. That I shouldn’t have been at that party,” she recalled in a soft voice. “My innocence went away in one night.

“I didn’t like hearing the gossip so I ran away from home, where I got involved in drugs, drinking and fighting. I knew I didn’t want to live in that pain. In that hurt,” she added.

Eventually, Stimson did get her life back on track and was sober for six years before she connected online with a man from Tacoma, Washington. One thing led to another and she soon found herself on the street and addicted to crystal meth.

“The sex trade was a symptom of my addiction and my life was in danger every single day,” says the 39-year-old. “Hate consumed me so much. Like I had two different identities. The scared First Nation girl who felt lonely all the time and the street person version of myself.”

While trying to get clean, she found it difficult to detox. It was not until Stimson was arrested for shoplifting, resisting arrest and thrown in the Pearce County jail for 30 days where she was able to turn a corner on the long journey to sobriety.

“I had a spiritual awakening in jail. I wanted to get home and get off drugs. 32 days later I was back in my community. Today, I have no desire to drink or use and it’s all through the power of prayer. I owe everything to my Creator.”

Through the UBC Aboriginal Access Studies (AAS) program, Stimson is moving towards obtaining a university degree. After successfully passing her first year, she is now on the path to completing a BA with a major in psychology. Her daughter, Moonlite Supernault, has joined her mom on campus and is in her first year of the AAS program.

“We’re quite competitive with grades. I’ve always loved learning and I love challenging myself,” said Stimson with a smile.

While the Highway of Tears is the most high-profile example of missing Indigenous women in the province, this valley is no exception as the remains of an Indigenous girl were found on a farm in the North Okanagan and nobody was charged with the fatality.

Faculty, staff and students are urged to hear first hand the importance Indigenous community plays in turning the tide on this epidemic. In Honour of Missing and Murdered Indigenous Women is a UBC sponsored event and will feature Indigenous community members sharing their journey along this often lonely path and how healing must come from within.

Stimson will be joining other community members in opening sharing their journey on Feb. 26 at 2 p.m. in the University Centre Ballroom (room UNC 200). In Honour of Missing and Murdered Indigenous Women is a collaborative effort between the Sexual Violence Prevention & Response Office, Equity and Inclusion, Ombuds Office and Aboriginal Programs and Services.

To RSVP or find out more about this event, visit: ubc.ca1.qualtrics.com/jfe/form/SV_81dSTvXzUyyTBn7