Could breadfruit be the next superfood? UBC researchers say yes 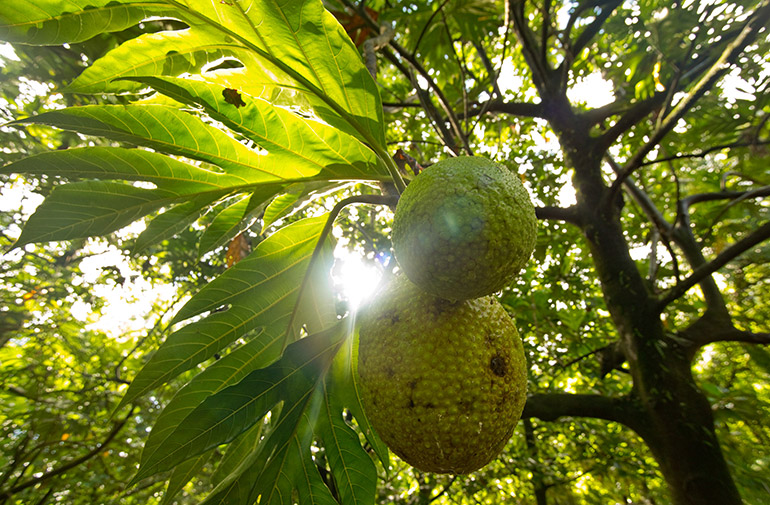 Breadfruit is sustainable, environmentally friendly and a high-production crop

A fruit used for centuries in countries around the world is getting the nutritional thumbs-up from a team of British Columbia researchers.

Breadfruit, which grows in abundance in tropical and South Pacific countries, has long been a staple in the diet of many people. The fruit can be eaten when ripe, or it can be dried and ground up into a flour and repurposed into many types of meals, explains UBC Okanagan researcher Susan Murch.

“Breadfruit is a traditional staple crop from the Pacific islands with the potential to improve worldwide food security and mitigate diabetes,” says Murch, a chemistry professor in the newly-created Irving K. Barber Faculty of Science. “While people have survived on it for thousands of years there was a lack of basic scientific knowledge of the health impacts of a breadfruit-based diet in both humans and animals.”

Breadfruit can be harvested, dried and ground into a gluten-free flour. For the project, researchers had four breadfruits from the same tree in Hawaii, shipped to the Murch Lab at UBC Okanagan. Doctoral student Ying Liu led the study examining the digestion and health impact of a breadfruit-based diet.

“Detailed and systematic studies of the health impacts of a breadfruit diet had not previously been conducted and we wanted to contribute to the development of breadfruit as a sustainable, environmentally-friendly and high-production crop,” Liu says.

The few studies done on the product have been to examine the glycemic index of breadfruit—with a low glycemic index it is comparable to many common staples such as wheat, cassava, yam and potatoes.

“The objective of our current study was to determine whether a diet containing breadfruit flour poses any serious health concerns,” explains Liu, who conducted her research with colleagues from British Columbia Institute of Technology’s Natural Health and Food Products Research Group and the Breadfruit Institute of the National Tropical Botanic Garden in Hawaii.

The researchers designed a series of studies—using flour ground from dehydrated breadfruits—that could provide data on the impacts of a breadfruit-based diet fed to mice and also an enzyme digestion model.

The researchers determined that breadfruit protein was found to be easier to digest than wheat protein in the enzyme digestion model. And mice fed the breadfruit diet had a significantly higher growth rate and body weight than standard diet-fed mice.

“As the first complete, fully-designed breadfruit diet study, our data showed that a breadfruit diet does not impose any toxic impact,” says Liu. “Fundamental understanding of the health impact of breadfruit digestion and diets is necessary and imperative to the establishment of breadfruit as a staple or as a functional food in the future.”

The use of breadfruit is nutritious and sustainable and could make inroads in food sustainability for many populations globally, she adds. For example, the average daily consumption of grain in the United States is 189 grams (6.67 ounces) per day. Liu suggests if a person ate the same amount of cooked breadfruit they can meet up to nearly 57 per cent of their daily fibre requirement, more than 34 per cent of their protein requirement and at the same time consume vitamin C, potassium, iron, calcium and phosphorus.

“Overall, these studies support the use of breadfruit as part of a healthy, nutritionally balanced diet,” says Liu. “Flour produced from breadfruit is a gluten-free, low glycemic index, nutrient-dense and complete protein option for modern foods.”

The study was recently published in PLOS ONE.