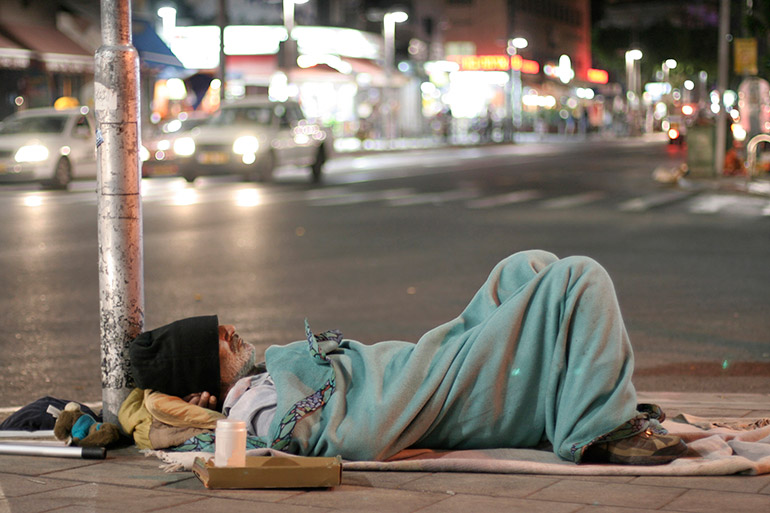 While each person has different reasons for becoming homeless, a new study shows they learn through their interactions with different services to perform ‘as homeless’ based on the expectations of service providers.

New UBC Okanagan research has identified that street homeless people must learn to ‘perform’ in particular ways through their interactions with service providers to receive the help they need.

School of Social Work researchers Dr. Shelley Cook and Dr. Rachelle Hole recently published a study that used social capital theory to gain an understanding of street homeless peoples’ survival through their relationships with the system of services they depend upon.

The fieldwork took place in downtown Kelowna where a number of men and women identifying as street homeless, aged between 23 to 55, were interviewed by Cook. Contrary to the findings from earlier research on homelessness, Cook found people who live on the street depend on service providers as their main source of material and social support—not their relationships with each other.

While each person has different reasons for becoming homeless, Cook says they all learn through their interactions with different services to perform ‘as homeless’ in particular ways based on the expectations of the service providers. The fact that resources are often over-burdened, makes the need to get the performance right to be deemed appropriate for services, that much more important.

“In a situation where need greatly outpaces the ability of the service system—where there’s only so many beds or bus tickets available—performing those representations of homelessness aligned with the service setting is all the more important,” says Cook. “It’s a necessary survival strategy that people use to increase their odds of making it on the street.”

Hole says performances of homeless identity take on different expressions even between similar service organizations. Previous research has shown that homeless people not only recognize what representations of homelessness were being promoted through the organization and adapted their performance to reflect these indicators, they were also aware they were doing it.

“In trying to make sense of where they took their cues from for their performances, participants discussed how they were often encouraged by service providers to ‘play up’ their social support or health-related needs,” adds Hole. “The basis of performing involves presenting the appropriate level of need based on their perception of the service context.”

As stated by one participant—“it is about looking homeless, but not too homeless.”

While this improves the odds of homeless people getting the services they need, Cook says the fact that people feel they need to ‘perform’ in order to get appropriate services, has the effect of reinforcing a homeless identity.

“With competition for resources contributing to the need for these performances that are in part, a side-effect of challenges related to service capacity, the problematic dynamic will persist as long as capacity issues do,” she adds.

Cook says it is clear that those who live on the street people are always trying to fit themselves into a ‘service box’ in order to get the resources they need to survive. And it’s time for practitioners and policymakers to recognize how the systems of services provided actually reinforce that homeless identity.

While the research was done on the streets of Kelowna, Cook admits this issue is not exclusive to the region and is consistent with other communities. It comes back to how services are structured around different models of care underpinned by particular ideologies about homelessness and who is fundamentally deserving of care.

“I think it’s clear that we need to think about how the policies and practices aimed at addressing homelessness may actually be contributing to people’s subjectification as a homeless person,” she adds. “If we fail to recognize and have an appreciation for the ways in which the discourse underlying different approaches creates and reinforces this box, however inadvertently or unintentionally, we will continue to perpetuate homelessness.”

The paper was published last year in the Journal of Human Behavior in the Social Environment.

Hole was also named one of UBC Okanagan’s researcher of the year in 2019: news.ok.ubc.ca/2019/03/08/prizes-awarded-to-ubc-okanagans-top-researchers