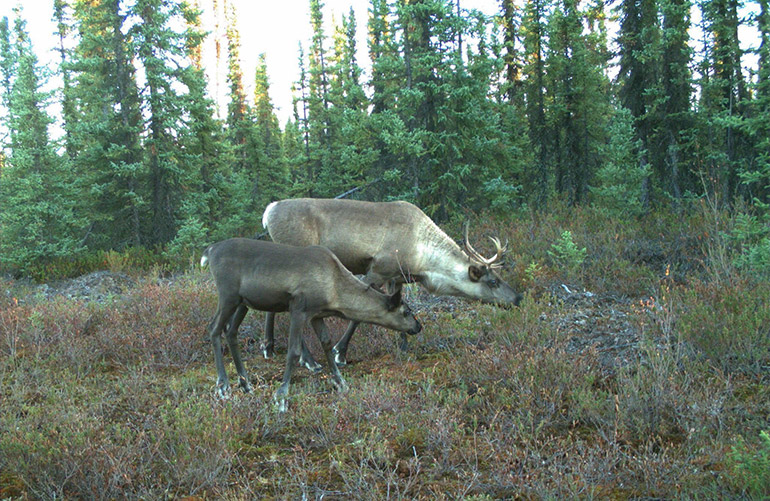 A team of researchers has determined the declining caribou population is part of a natural chain reaction from forest harvesting which can attract predators and competition for food. Photo by: Caribou Monitoring Unit

A new study comparing decades of environmental monitoring records has confirmed that Canada’s caribou are not faring as well as other animals like moose and wolves in the same areas—and also teased out why.

The study used 16 years of data to examine changes in vegetation, moose, wolves and caribou.

“Caribou are declining across Canada and have been recently lost in the Lower 48 States,” says Melanie Dickie, a doctoral student with UBC Okanagan’s Irving K. Barber Faculty of Science.

“Understanding why caribou are declining is the first step to effectively managing the species—it tells us which parts of the issue we can target with management actions and how that might help caribou.”

Dickie, along with fellow UBCO researchers Dr. Clayton Lamb and Dr. Adam Ford, describe the decline in caribou populations as an ecological puzzle. Typically, there are multiple factors, all changing at once, making it hard to identify how the pieces fit together. Factors such as predation from wolves and other large carnivores, increasing moose and deer populations, and habitat alteration through resource extraction and wildfires all play a part. The study aimed to sort out the roles each of these play in caribou population declines.

Once land is cleared by either wildfire or harvesting, the mature forest transforms into more productive early seral forage. With the tree canopy removed, there is a significant increase in sunlight, allowing understory plants to thrive. These plants provide food that benefits moose, deer and their predators. These predators then have a spillover effect on the rarer caribou, creating apparent competition between moose and caribou.

“Changes in primary productivity have the potential to substantially alter food webs, with positive outcomes for some species and negative outcomes for others,” Dickie explains. “Understanding the environmental context and species interactions that give rise to these different outcomes is a major challenge to both theoretical and applied ecology.”

To establish the link between habitat alteration and primary productivity, the researchers first examined satellite imagery to show a link between logging and new vegetation growth. They then used data on moose, caribou and wolf numbers to compare the leading hypotheses on how changes in vegetation influence these populations. The analysis was conducted across a 598,000-square kilometre area located in the boreal shield and boreal plains of western Canada.

Ultimately, the researchers determined that lower caribou populations were a victim of an ecological chain reaction. Caribou have a lower population growth rate relative to moose, making them more susceptible to landscape changes.

“We found that increased deciduous vegetation on the landscape, which moose like to eat, increased moose populations, which increased wolves, and in turn, means declining caribou,” Dickie says. “We also found that human land use, like forestry, significantly increased vegetation productivity, suggesting that these kinds of land uses are leading to caribou declines via changes to predators and prey.”

Caribou conservation will be a defining point for Canada in the 21st century, adds Dr. Lamb, a Liber Ero Fellow at UBCO. Caribou highlight an unresolved tension between land stewardship, wildlife conservation and resource extraction. Further, as caribou populations continue to decline, Indigenous Peoples are forced to grapple with mounting threats to food security, cultural traditions, and infringed treaty rights.

“We can’t attribute caribou declines to just one factor or another,” he says. “But understanding the relative importance of these factors, and how they interact, can help us understand how we can manage caribou populations in the face of continued climate change and land use.”

The study, published recently in the Proceedings of the Royal Society, was partially funded by the Government of the Northwest Territories, Government of Alberta, the Resource Industry Caribou Collaboration, British Columbia Oil and the Gas Research and Innovation Society, and the Liber Ero Fellowship. 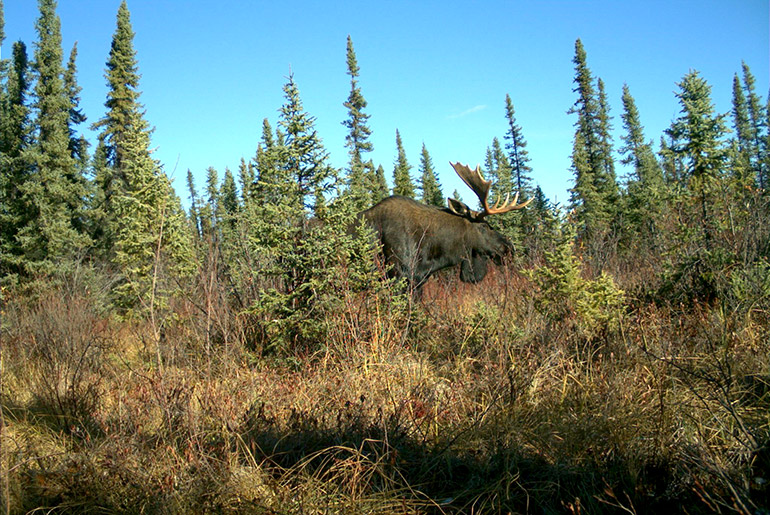 Caribou have a lower population growth rate relative to moose, and are not as resilient, making them more susceptible to landscape changes. Photo by: Caribou Monitoring Unit