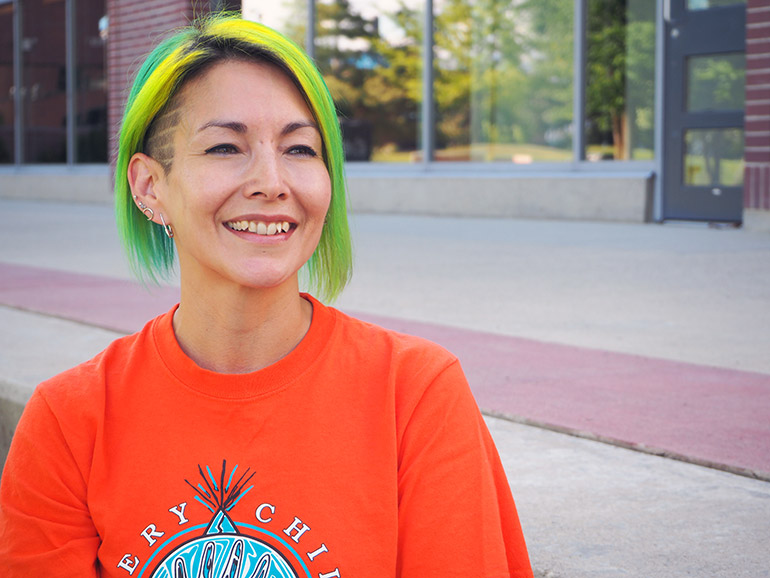 UBCO master’s student Sandra Fox is being recognized with the Governor General’s Gold Medal for her research on Indigenous identity which led to several recommendations for Canadian universities to better serve Indigenous students.

It’s an honour bestowed upon the university’s most accomplished graduate students — and this year, Master of Arts student Sandra Fox is being recognized with the Governor General’s Gold Medal for her exceptional research on Indigenous identity.

The medal, awarded annually, goes to the student with the most outstanding academic record in a thesis-based graduate program.

“Sandra is a remarkably self-confident student,” says Dr. Evans. “She’s deeply thoughtful and reflective about the processes of research and writing, and as her supervisor I mostly just had to stay out of her way. Her research is an example of the fine work emerging from contemporary Indigenous studies scholarship.”

Fox’s journey has been filled with plenty of twists and turns — and, though she didn’t know it at the time, her experiences as a child helped to build the foundation for her future work.

The daughter of a Musqueam mother, and a father with British ancestry, Fox recalls struggling with her own identity from a young age.

“I was confused about who I was and where I came from. I always found school very stressful, not because of the work, but socially I never really fit in and I didn’t know why,” she says. “Now, I realize it was because I was raised with my mom’s Musqueam ways of knowing and being, so having to attend a school with such different cultural values was challenging.”

After high school, Fox enrolled in sciences at Okanagan University College (now UBC Okanagan) but felt like there was always something pulling her in another direction.

Ultimately, she found her passion in anthropology. After earning her Bachelor of Arts she began working for local aboriginal organizations, including UBCO’s Aboriginal Programs and Services (APS) where she had the ‘ah-ha’ moment that led her back to school.

“I worked with students who had so many of the same questions I had, and such similar stories, even though they came from different nations, territories and locations,” explains Fox. “There were these threads that tied our stories together, and I realized I needed space to explore them in my own way.”

Fox decided to leave her job and began her master’s degree in Interdisciplinary Graduate Studies. Studying in the community engagement, social change and equity theme, she started down a path investigating how various factors shape and have shaped the identities of Indigenous peoples.

She began by exploring how colonization affected Indigenous identities.

“Originally, it was just us here so there was no need to identify as First Nations. It wasn’t until the settlers came that we began being labelled, so my research looked at how that, the Indian Act, and other social factors have impacted how we view ourselves.”

Fox also looked at colonization in the education system.

“For good or ill, the system was built on colonial foundations. Just because we’re not going to residential schools anymore doesn’t mean we aren’t attending colonial institutions — we’re told we must speak English or French, we have to leave our hearts and spirits at the door. That’s not to say progress isn’t being made, there seems to be a genuine appetite for change, but change takes time.”

She describes her research as a labour of love.

Because it was emotional work, she is grateful to those around her for their ongoing support.

“Dr. Evans has been so amazing — he gave me creative freedom and was always in my corner when I pushed boundaries with my thesis. Everyone in APS was also very supportive; and my family helped me immensely. I’m grateful to have had so many people cheering me on.”

Fox says it was ultimately the Indigenous students she partnered with that kept her going until the end.

“They were such a motivator for me. They gave me their time and vulnerability, so I felt a responsibility to do the research well and ensure their voices were heard.”

Fox crosses the virtual stage this week with her master’s degree and UBC Okanagan’s top award.

She is once again a proud UBCO employee, now working as the Indigenous Community Liaison in the Office of Research Services.

Overwhelmed by the prestigious honour, Fox says the recognition means a lot, especially to her family.

“Education was used as a tool to take away so much from our people,” she says. ”Being able to come back and use it as a way to try and heal from that — it’s incredibly empowering.”