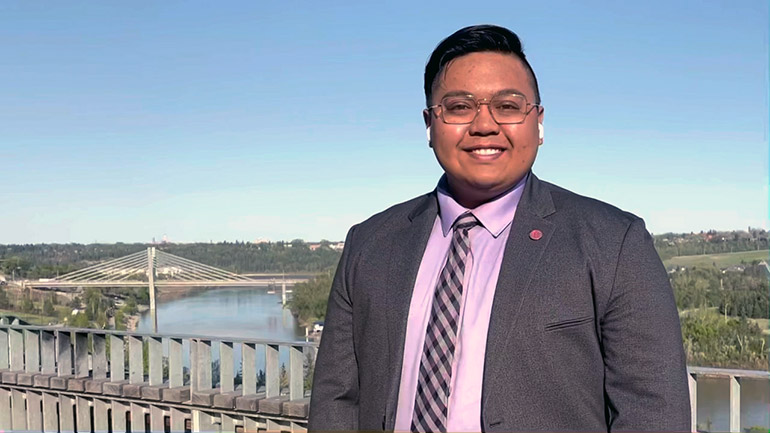 Venedict Tamondong, who recently graduated from UBCO with a Bachelor of Applied Science in Mechanical Engineering, was also awarded the 2021 Dr. Gordon Springate Sr. Award in Engineering.

Top-notch student wins award for contributions made outside the classroom

A UBC Okanagan student who spent almost as much time volunteering as he did studying, has been recognized for being an indispensable student advocate and leader.

Venedict Tamondong recently graduated from UBCO with a Bachelor of Applied Science in Mechanical Engineering. He was also recognized for his student leadership and awarded the 2021 Dr. Gordon Springate Sr. Award in Engineering.

“I am truly humbled by this award, especially considering that it is based on experiences that also positively impacted my university career,” says Tamondong. “The students, staff and faculty that I connected with at UBC and across Canada continue to inspire me.”

Originally from Edmonton, Tamondong quickly became an engaged and active member of the engineering campus community. During his five years as a student, he served as a first-year representative, vice-president external and president of the UBC Okanagan Engineering Society. He also served on numerous executive positions with the Western Engineering Students Societies’ Team and the Canadian Federation of Engineering Students (CFES).

Tamondong also coordinated a series of meetings and events including the conferences on diversity in engineering, leadership and sustainability, the Canadian Engineering Competition and the CFES’ professional development jumpstart program.

During the pandemic, Tamondong didn’t stop contributing. He developed online conferences and competition initiatives including the successful 2020 summer session of the Jumpstart program, says Sadiq.

“With all of these accomplishments, it would be easy for him to rest on his laurels, but he still managed to achieve a 90 per cent grade in his final year, while carrying courses such as biomedical engineering, biotechnology, computational fluid dynamics and engineering construction and management,” says Sadiq.

The $10,000 Dr. Gordon Springate Sr. Award in Engineering is an annual prize presented to a student who is completing their Bachelor of Applied Science with the School of Engineering and has demonstrated a material contribution to their community outside of their program. The award encourages and promotes self-responsibility and lifelong learning, says his son Gordon Springate Jr.

Tamondong, humble for this recognition, says UBC Okanagan was the nexus for all of his successes.

“Frankly, all these opportunities came to me because I happened to choose UBC. And I’m thankful the School of Engineering offers so many ways to contribute and connect,” he says. “To all the student groups I had the opportunity to be a part of during my years at UBCO, I say thank you. I will always remember being able to help advocate and serve fellow students and I am proud of my accomplishments.”

Tamondong recently started as a field engineer at Capital Power Corporation, where he is helping to build renewable wind turbines at a project located near Medicine Hat, Alberta. He plans to continue working in responsible, renewable energy with the goal to continue developing his skills as a project engineer and future corporate leader.