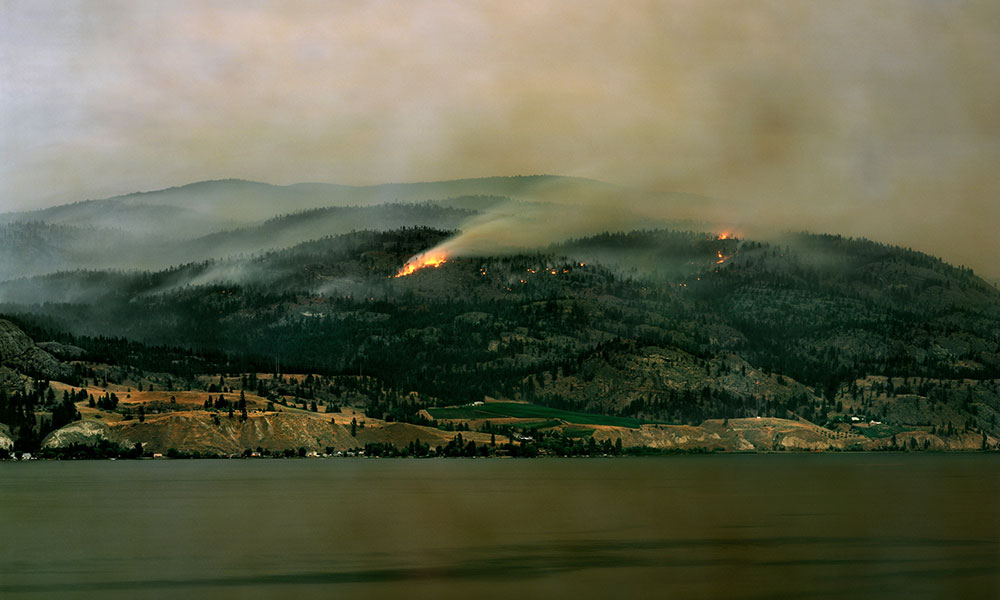 Location
The forests of the Okanagan Valley

AS PONDEROSA PINES LOOM BEFORE HIM, the ground beneath Dr. Mathieu Bourbonnais’ feet crunches and crackles as he traverses the dry mountainside. The dried-out needles, grasses, branches and logs that cushion his steps have a potentially devastating undertone though, as they’re the perfect fuel for a forest fire.

Dr. Bourbonnais — alongside master’s students Renée Larson and Norah Lloyd-Ellis — are in the midst of setting up one of numerous 30-by-30-metre ‘rapid fuel plots’ across the Okanagan at sites representing a range of forest types. In combination with light detection and ranging data, the plots will allow Dr. Bourbonnais and his team to identify how much and what type of flammable materials — or fuel — can be found in each area. This will then help them understand the wildfire risk in the Okanagan Valley — an area that’s been severely understudied when it comes to the impact of forest fires.

“The data helps us understand not only how fuel structure differs based on land use and forest type, but also how fuel loads change over time,” says Dr. Bourbonnais, an assistant professor in the Department of Earth, Environmental and Geographic Sciences in UBCO’s Irving K. Barber Faculty of Science. “Knowing this information can help inform our decisions about trade-offs between different wildfire mitigation tactics and strategies. It can also shed some light on the effect fires have on natural resources and assets.”

A former wildland firefighter, Dr. Bourbonnais is no stranger to the world of forest fires; he used to rappel from helicopters into wildfires below. Now his focus is on using geographic information systems, remote sensing and statistical models to understand what’s happening with forest fuels in the Okanagan — just one of several regions in the province that’s been hit hard by forest fires in the past due to its often hot and dry conditions.

The fieldwork is just one part of Living with Wildfire, a two-year interdisciplinary research project that aims “to move the science forward on how we quantify and understand fuels and our relationship with fire in Canada,” explains Dr. Bourbonnais. Funded by a $250,000 grant from the New Frontiers in Research Fund, the project is exploring the ecological, cultural and socio-economic dimensions of wildfire in the Okanagan. UBCO professors from sustainability (Drs. Lael Parrott and Greg Garrard), economics, philosophy and political science (Dr. John Janmaat) and Earth and environmental sciences (Dr. Kevin Hanna) all are involved.

In 2017 and 2018, British Columbia faced two of the worst wildfire seasons in the province’s history, with more than 2.5 million hectares destroyed by 3,470 wildfires. Fire suppression costs for the two years alone totalled $1.264 billion, compared to the 10-year average of $265 million. At the time of writing this story, the 2021 fire season is shaping up to be another devastating year, with 1,551 wildfires responsible for destroying over 860,000 hectares of land, including the entire Village of Lytton in BC’s interior region.

But what can’t be quantified are the adverse social, physical and mental health impacts that people experienced after relocating due to fires and widespread smoke. According to Dr. Bourbonnais, “By 2050, years like 2017/18 in BC will be commonplace,” with potentially serious impacts on human health due to prolonged smoke exposure and billions of dollars in increased fire suppression — not to mention numerous other indirect costs.

The fact that researchers are now seeing more intense fires with more severe effects doesn’t surprise Andreas Rutkauskas, who is documenting forest devastation and regeneration on film as part of the project.

Rutkauskas, a lecturer in UBCO’s Faculty of Creative and Critical Studies, focuses on photography and videos of landscapes that have undergone changes. For him, the Living with Wildfire project is an opportunity to raise awareness about the diverse perspectives related to wildfire while also highlighting a more holistic approach to the topic. 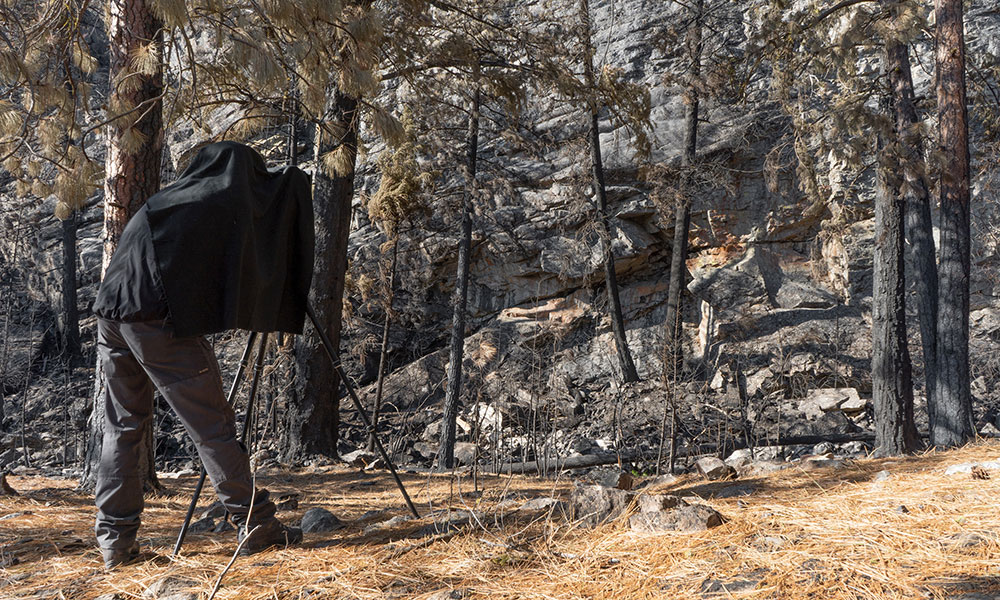 Rutkauskas in action in the field. Photo courtesy of Sam Neal.

“Prior to the Okanagan’s settlement by Europeans, Indigenous traditional firekeepers would use controlled burns to clear the understory and rejuvenate berry crops and game,” explains Rutkauskas.

While several agencies and factors are involved in BC’s current wildfire management process, Rutkauskas believes the province still has a long way to go for fire management.

“In this region, fire has been used for millennia to manage the forests, but for the last century we’ve had this preoccupation with fire suppression rather than fire management. The result is dense forests with high fuel loads in areas, and when fire hits that forest it can grow into a large-scale wildfire quickly.”

Using topographic maps and historical records, Rutkauskas and Master of Fine Arts student Sam Neal are documenting how landscapes not only recover, but thrive after a forest fire. “One of the first things you notice walking into a recently burned forest is the smell; ponderosa pines are quite fragrant when they burn. Of course, there’s also the contrast of charred tree trunks against a fervent green landscape, where native species like morel mushrooms and balsamroot thrive after a fire.

“The concept of my work isn’t to focus on the immediate aftermath of wildfire, but rather the regeneration — and how forests rebound and respond in the wake of wildfire.”

Rutkauskas adds: “A lot of the sites are difficult to access due to rough terrain, so I want to gather as much visual data as possible to replicate being in the field and raise awareness about how we live in a fire-adapted ecosystem. It’s amazing how few people realize that.”

Using a large-format film camera along with a new 360-degree imaging camera, Rutkauskas and Neal are creating immersive scenes of forests and fuels. By using these images in tandem with virtual reality technology — something Rutkauskas is actively exploring — researchers and the public alike can put themselves in the forest and not only look at what fuels are present, but how fire behaves with different fuel types. He also believes that the photos and videos will give the public a better sense of being part of the wildfire process — and understand what it means to live with wildfire.

“We have to help people understand that wildfires are part of ecosystems and they can have positive effects, but these increasingly large, severe and dangerous wildfires are problematic,” explains Dr. Bourbonnais. “There needs to be a new approach to landscape management that allows wildfire to be part of the landscape while effectively managing risk.

“The ecological purpose of fire is renewal, so when we suppress fire we disrupt ecological processes. If that’s the starting point for redefining how we live with wildfire, that’s a big hurdle for the public and wildfire management to overcome. Ultimately there needs to be a sense of urgency to develop solutions.”

*All photos, other than noted, courtesy of Andreas Rutkauskas