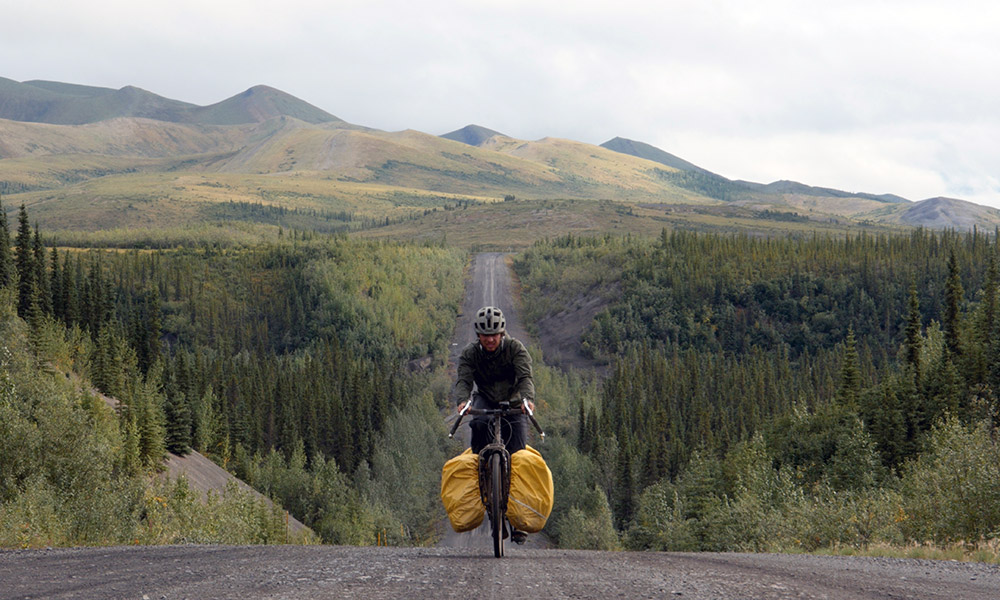 UBCO student Michael Friedland cycles along the dirt-covered Dempster Highway as he journeys to Tuktoyaktuk.

If you ask UBC Okanagan student Mikey Friedland what he did this summer, make sure you have lots of time. He has a long story. But it’s worth every minute.

Friedland, a fourth-year international relations student, cycled from the 49th parallel (the Canada-US border at Osoyoos) to Tuktoyaktuk (the Inuvialuit town nestled on the Arctic Ocean) by himself.

His goal was to raise awareness and money for the Canadian Mental Health Association’s (CMHA) Ride Don’t Hide initiative. So far, he has raised more than $27,000, more than twice doubling his fundraising goal.

Friedland, who has dreams of being a documentary filmmaker, left Osoyoos on May 21 with a secondhand touring bike, panniers stuffed to the limit, his camera, a drone and absolutely no long-distance cycling experience.

“When I started, I took a photo of myself at the Welcome to BC sign in Osoyoos. When I saw the same sign from the opposite side, crossing into the Yukon, it was absolutely the coolest thing in my entire life.”

Before the pandemic hit, Friedland was scheduled to go on an educational exchange with UBCO’s Go Global program. When that was cancelled, he took a year off school and moved to Revelstoke to spend the winter skiing. This spring, even though surrounded by friends, he found himself feeling lonely and perhaps dealing with a bout of seasonal depression. He was at a loss. Unhappy for no apparent reason and with little motivation.

“Having a goal is very important to me,” he says. “When I’m working toward something, that’s when I’m at my happiest and best. So, I found a goal, riding my bike as far north as I physically can before going back to school.”

Friedland grew up in Toronto and entered university with an undeclared major four years ago, but the more he learned during his time in the Irving K. Barber Faculty of Arts and Social Sciences, the more his eyes opened to the vast opportunities his education could provide.

“I took a ton of different courses — philosophy, political science, psychology, gender and women’s studies. The interdisciplinary nature of the international relations program drew me in. I love learning about the world, and this program really gives you the opportunity to keep learning.”

Friedland used the summer to hone his documentary-making skills, creating a film series chronicling his journey. So far, three episodes are available to watch on his YouTube channel. Two more episodes — showing his travels through northern BC, the Yukon and the Northwest Territories — will be released in September. All told, his route surpassed 4,000 kilometres, including nearly 25,000 metres of vertical climbs.

“This hasn’t been an easy journey, but it has certainly been an amazing experience,” he says, describing riding sometimes until midnight and then setting up camp. “Every day I’m in a new area, and every few hours, a new ecosystem.”

During his journey, Friedland was invited to a barbeque dinner by a Tlingit elder, eating alongside Indigenous people taking part in the Warriors Walk from Whitehorse to Kamloops. He was invited to the community fish camp in Fort McPherson, and shown the process of cleaning and drying Koni and Whitefish. He’s been offered places to sleep, showers, food, water, friendships and of course money.

But what he’s really realized, at the age of 23 and through daily mental health checks, is that he’s ok. He’s alone. And he’s doing just fine.

“I’m realizing more and more that mental health is a part of my life and something I need to personally think about every day,” he says. “I am committed to making more of a conscious effort to check in with myself and be honest. Because everybody has times when they are doing well and times when they are not.”

There is a lot of time to think while cycling long distances on a bike that weighs, when fully loaded, about 90 pounds. Time that Friedland has used to commit to continuing the conversations about mental health while raising funds for the CMHA.

All contributions will be divided between three CMHA branches: Shuswap/Revelstoke, Northern BC, and the Yukon. This local approach allows the funds to be allocated to the programs that are most needed in each community.

“I’m really hoping my ride helps bring mental health out in the open. It’s been important to me because mental health has been tucked away for so long — and that has real consequences. Since I started this journey, the number of messages and feedback from people has been inspiring and heartwarming. It has let me know I’m on the right path.”

“Mental health is something to protect, something we can strengthen. When people receive the right services and support, mental illness doesn’t take hold. But every year, 1.6 million Canadians don’t get the mental health care they need. If I can change that one little bit, then I’ll consider every mile, every flat tire, bear scare or moment of isolation totally worth it.”

Contributions to his campaign can be made at: cmha.donordrive.com/participant/mikeyfriedland 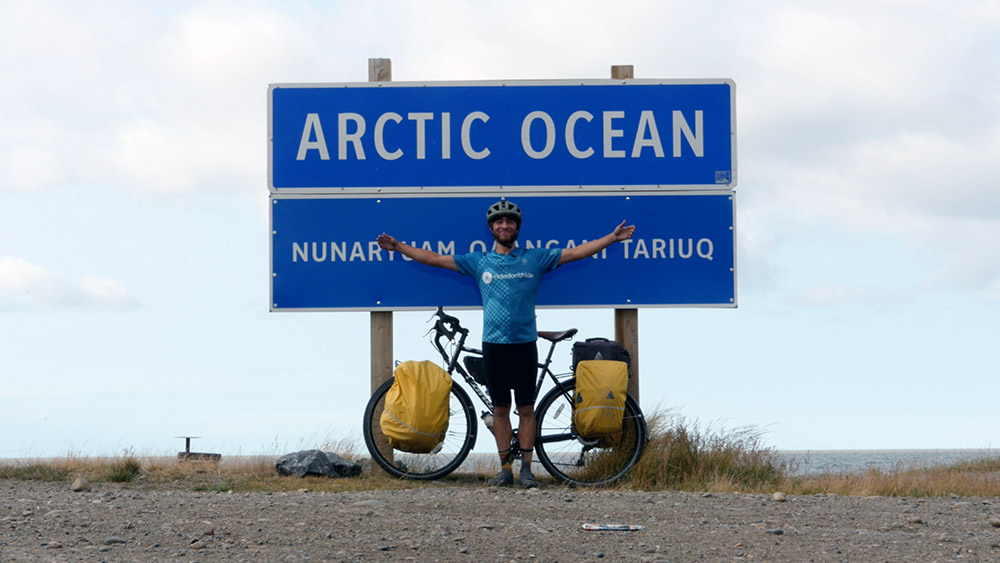 Michael Friedland chose the journey of Osoyoos to the Arctic Ocean and raised more than $27,000 for mental health awareness.