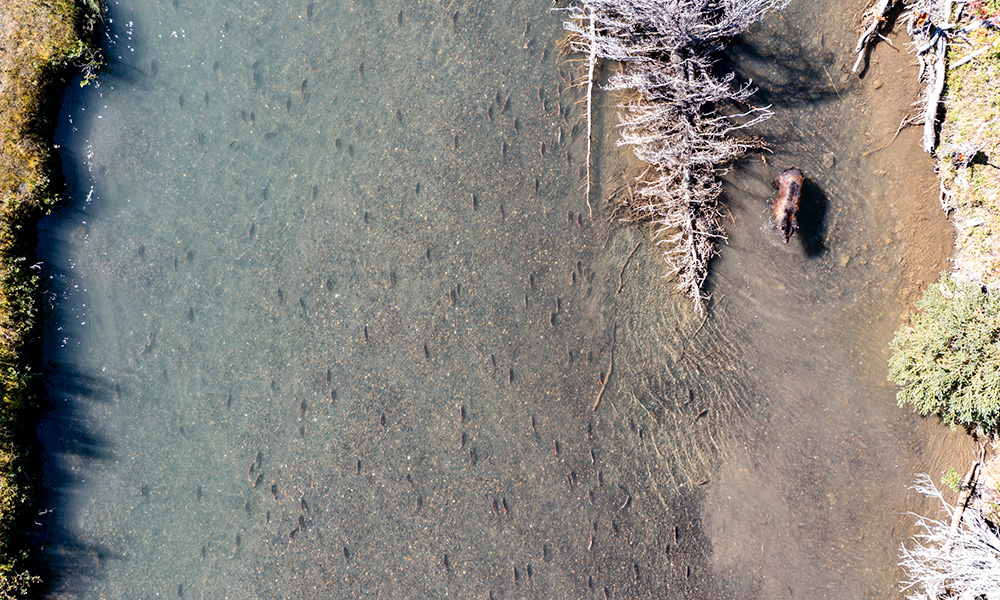 Work done by UBCO researchers determined that the hatchery population at the Whitehorse Rapids Fish Hatchery is no longer genetically similar to the wild population and helps inform further conservation efforts.

A chance discovery of salmon DNA samples, taken in the 1970s and stored in a drawer for decades, has given new insight into managing present-day kokanee populations in Kluane National Park and Reserve (KNPR).

“These archival samples had been carefully stored but were largely forgotten until unearthed during an office move in 2013,” says Workman. “The genetic health of the park’s kokanee salmon became a concern after we started seeing really low numbers of returning spawners.”

Historically, the average number of spawning kokanee in a year was 3,660. But by the early 2000s, the numbers dropped dramatically—and in 2009 there was an all-time low of 20.

“While the population has somewhat rebounded since, park managers were concerned that this long decline had impacted the genetic health of the population, leaving it less able to adapt to future changes or stressors in the environment,” says Workman.

The archival DNA samples were sent to UBC Okanagan researcher Dr. Michael Russello to investigate the history of the population by examining genetic variation between fin and scale samples taken pre- and post-crash. Dr. Russello worked with master’s student Chris Setzke to compare the old and new DNA specimens.

DNA sequencing techniques have rapidly advanced and UBC researchers used a novel approach to analyze DNA from these 40- and 50-year-old samples, says Dr. Russello, a Professor in the Irving K. Barber Faculty of Science. He says the long-forgotten DNA proved a valuable resource, especially when compared with samples from today’s population.

“If we had not had access to these archival samples, inappropriate conservation initiatives may have been enacted, misdirecting resources or even potentially leading to adverse outcomes for the kokanee population in KNPR,” he adds.

For example, an analysis using only current DNA suggested that, based on certain genetic signatures, diversity in the system may have been lost due to the severe period of decline. However, by including the historical DNA samples, they found these genetic features were present even before the kokanee population crashed.

Essentially, the researchers determined no significant diversity was lost as a result of the decades-long population decline in KNPR.

The work done by the researchers further determined that the hatchery population at the Whitehorse Rapids Fish Hatchery—which was established using kokanee from KNPR throughout the 1990s—is no longer genetically similar to the wild population. This means hatchery kokanee should not be used to restore the KNPR population.

“Without these studies, it is possible that KNPR would have been stocked unnecessarily with hatchery kokanee,” Dr. Russello adds. “This could have ultimately reduced the fitness of the wild salmon populations in that system, which is the opposite of the intended conservation goals.”

It wouldn’t have been the first time ill-informed, but well-intentioned stocking practices led to a decline and loss of diversity in wild populations elsewhere, he explains.

“This work really shows the importance of gathering the best available scientific information before making decisions that could negatively impact the populations targeted for protection,” he adds.

This particular research tested the efficacy of a technique called Genotyping-in-Thousands by sequencing (GT-seq) to analyze these largely forgotten historical samples, Setzke says. GT-seq can target and sequence hundreds of predetermined areas across the genome and can be used for thousands of individuals at the same time. GT-seq only needs short fragments of DNA to obtain genetic information, which led the investigators to suspect that it could be an effective method to sequence older, more damaged DNA.

“As archival DNA tends to be damaged, it is difficult to sequence using methods that need long, intact fragments,” explains Setzke. “While GT-seq has been in use for a few years now, ours is the first study to show that it can be employed to effectively sequence archival DNA.”

The most significant finding, says Workman, is the discovery that the fish hatchery population is not genetically similar enough to the historical or current wild population to be used to restock the Kathleen Lake System.

“Protecting the park’s kokanee is important for maintaining ecological integrity,” says Workman. “And using hatchery fish to supplement wild populations is a tool used by fisheries managers elsewhere. But thanks to the UBCO researchers, we now know that this currently is not an option for Kluane’s kokanee.”

The findings of the two studies have been recently published in Conservation Genetics and Scientific Reports.