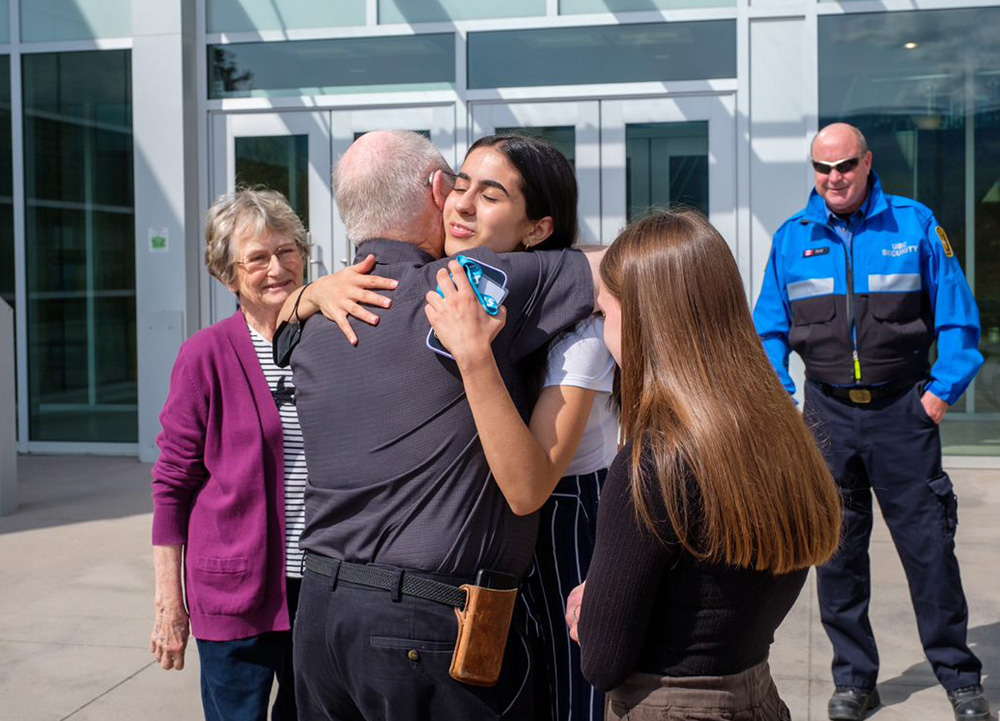 UBCO student Kim Davarani hugs heart attack victim Murray Forbes. Davarani is one of several students who conducted CPR for more than 20 minutes on Forbes after he collapsed on campus on his way to class one morning.

Murray Forbes is in his 70s, but has always wanted to go back to school to earn an engineering degree. When he started his studies at UBCO, he frequently mentioned that being surrounded by young people was one of the greatest perks of being a mature student.

Little did he know, it would be a group of young people—UBC Okanagan students—who would one day save his life.

The day started as any other. Forbes recalls parking in the student lot, grabbing his backpack and locking his car. He has no other memory of that day but has a feeling fate may have been at hand. Normally, he walks up a steep hill to campus and then uses a quiet entrance into a large building to get to class. But on that particular day—and he doesn’t know why—he ended up in the fairly busy courtyard in the centre of campus.

He was found unconscious and had suffered a massive heart attack.

The other lucky break that day is first-year human kinetics student Marissa Burfield being in the right place at the right time. A member of UBCO’s Emergency First Responder Team (EFRT), she had left the gym and was walking through the courtyard to meet fellow EFRT member Kim Davarani for breakfast.

“I could see people standing around a man lying on the ground,” Burfield says. “I couldn’t really believe it was happening, it was a bit of a shock. But my muscle memory kicked in. You can train so much, but once you’re in a situation, you don’t think—you just move.”

Burfield introduced herself as a trained first responder and assessed the situation. At the same time, Davarani was answering a call for a suspected seizure in the courtyard. She rushed to where Forbes had fallen.

“I was relieved to find Marissa had taken control of the situation,” Davarani says, explaining she began checking for a pulse and signs of breathing. “People thought it was a seizure, but when I started taking the vitals and checking his circulation, I realized this is no longer a seizure call. This was about to become a very intense call.”

The EFRT is a volunteer organization that trains UBCO students in several levels of first aid. In return, members are expected to be on duty 12 hours a week during the academic year. There are a variety of shifts and the workload is flexible to suit student schedules.

Established in 2016, the club has about 35 members, who can be identified when on duty by their red jackets and backpacks. Members receive standard first aid training through the Canadian Red Cross and can progress to the point of being a level-three first responder.

They work alongside UBCO’s Campus Security team and are on-call 24/7 during the academic year, explains EFRT coordinator Kailey Newel.

“Our role on campus is to increase the number of people who have first aid knowledge. After graduation our members are going to go out into the workforce with these lifesaving skills,” Newel explains. “We know they will have the confidence to use those skills and show leadership when needed.

Newel was heading to campus when she received a phone call from security about Murray’s incident. She knew something was terribly wrong; they normally communicate via email. Newel, who graduates from the human kinetics program this spring, joined the EFRT four years ago and volunteers as the administrative coordinator.

“The situation with Murray is the perfect example of why we practice our skills. You never know when you might be needed.”

UBCO student Morgan Tucker arrived minutes later. A member of the EFRT for three years, Tucker was on duty and knew the situation was dire.

“We know the statistics—when someone is in cardiac arrest the outcome can be very grim,” says Tucker, the most senior EFRT member at the call. It was her job to organize the chaos, direct people to retrieve and use life-saving equipment, and monitor the health and safety of the patient.

The students used all their resources, relying on some bystanders for help. They performed CPR for 22 minutes and used an automated external defibrillator twice to get the patient’s heart beating.

“We all did our jobs and we didn’t give up,” says Tucker, who graduates this spring. “I never imagined I would be using the skills I have to save a life. I am so thankful we have them.”

Not as thankful as Forbes. He was whisked away in an ambulance and would wake up days later in hospital. Previously, after suffering two earlier heart attacks, he had signed a do not resuscitate (DNR) form. But on that day, fate took matters out of his hands.

“I’ve always been adamant about DNR because I was afraid I would not be competent if I was resuscitated,” says the 77-year-old. “This time, of course, I was not capable of making any decisions. And it’s a good thing. Those students stepped in and saved my life.”

Forbes received a pacemaker, new medication for his heart condition and several broken ribs, typical after CPR-related chest compressions. He is expected to make a full recovery and plans to continue his studies.

“I was already finding the degree harder than I expected. And being in hospital for two weeks, I missed quite a bit, so I dropped two courses,” he admits. “But completing this degree is something I’ve always wanted to do and I would like to graduate. I’m going to keep plugging along.”

It took several weeks for the EFRT members to learn Forbes made a full recovery.

“In the case of a cardiac arrest, you start to question whether you did the right thing,” says Davarani. “This was one case, a special case where we wanted to hear the outcome.”

Forbes too, went searching for answers. He knew these students saved his life and he needed to thank them.

A few weeks ago, they were reunited and the EFRT members involved were honoured with a letter of commendation by UBCO’s Principal and Deputy Vice-Chancellor Lesley Cormack in a small private ceremony. Forbes, of course, was delighted to meet them. Yet the students remain humble—all saying they simply reacted to the situation as they had been trained to do.

“It was like a happy ending and usually there isn’t a happy ending,” says Burfield. “It was so great to see him. He was walking well and was all smiles. I feel that was a cherry on top and it makes you feel it was worth it. For some reason, we were at the right place at the right time and we were trained to do the right thing.”

For Davarani, who may one day head to medical school, she is simply a student, doing what she’s been trained to do.

“I don’t feel like a hero,” adds Davarani. “I feel like a citizen who knew my scope, knew how to use the skills I have. This is something many people could do, it’s just a case of whether you have the confidence to do so. This wasn’t a heroic action, it was being there and reacting quickly to the situation. And yes, luckily, saving a life.” 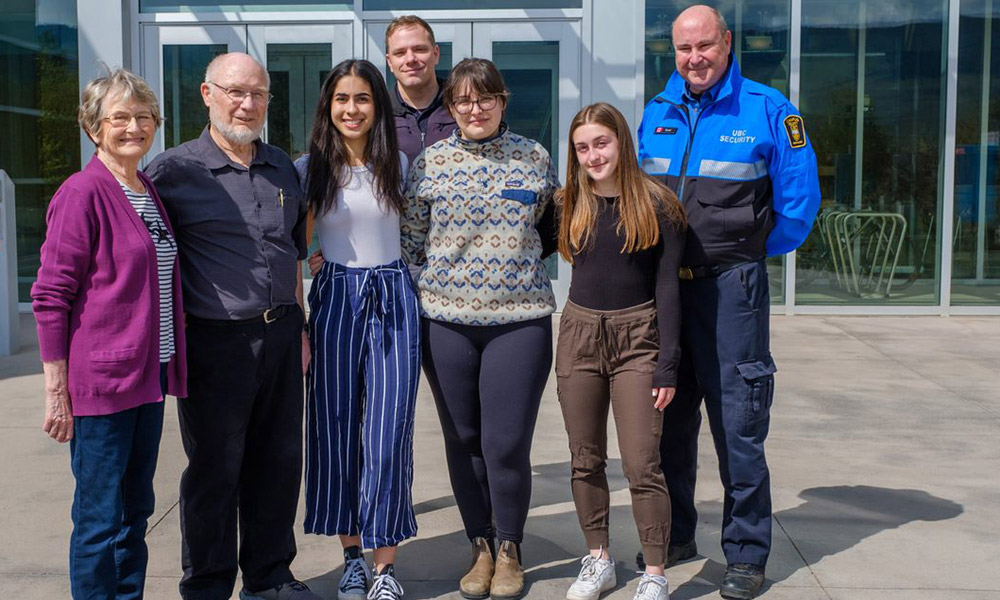