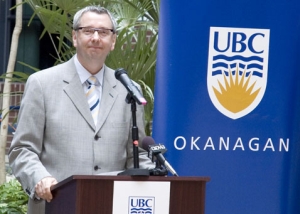 Germanic studies — the study of German language and culture — will soon be offered by UBC Okanagan’s Faculty of Creative and Critical Studies (FCCS), thanks to a $1-million gift from Klaus and Lydia Reichwald of Kelowna.

“This is an important area of cultural scholarship, and one that will certainly flourish in the Okanagan,” UBC President Stephen Toope said this morning in announcing the creation of the Reichwald Professorship in Germanic Studies.

FCCS hosts UBC Okanagan’s offerings in creative and cultural areas including literature, film, art history, cultural studies, and the creative and performing arts. “A full-time Germanic Studies professor will teach courses in German language and culture, collaborating with other scholars in the Faculty of Creative and Critical Studies,” Toope said. “This gift will stand as a lasting legacy not only for the Reichwald family, but for the entire German-Canadian community, and many future generations of UBC Okanagan students.”

Klaus Reichwald came to Canada from Germany at the age of 16. He started and completed his electrical apprenticeship in Edmonton. In 1963, Klaus joined Western Electrical Constructors Ltd. to start that firm’s Calgary operations. Within 10 years he became a partner, then president, leading Western to become one of the largest electrical contractors in Alberta, participating in the tremendous growth of Calgary and Edmonton. The firm has been involved with many of Alberta’s major building and construction projects. He continues as Chairman and CEO of the Western Group of Companies.

“The Reichwalds have started something that will grow,” noted UBC Okanagan’s Acting Deputy Vice Chancellor Alaa Abd-El-Aziz. “We are committed to establishing a respected and influential centre of excellence in Germanic Studies. The importance of German language and culture in the Okanagan is evident not only in the greater community, but right here at UBC Okanagan — the two German language classes offered this year were wait-listed. There were twice as many students on the list as there were available seats.”

Robert Belton, Dean of FCCS, said an advisory committee with representation from the community will be established to assist in defining the program as it is being developed. Community connection will be a big part of the professorship, he noted.

“Faculty have suggested such university-community partnerships as a German film festival or public lectures on German culture,” said Belton. “These are the types of projects that the endowed professor would be able to spearhead and support.”

Scot Speiser, board member with the Central Okanagan Economic Development Commission, noted that the Reichwald Professorship is good news for a region in which many residents are of German origin.

“With 15 per cent of mother-tongue language in the Okanagan being German, we as a Commission decided a long time ago that we should seek business opportunities with Germany,” said Speiser. “We have attracted German entrepreneurs, and now see the influx of skilled German workers into the Okanagan. We view the University as a crucial piece of our marketing in Europe, and the commitment to establish a professorship in Germanic Studies will only help assist our efforts, and continue to move the valley in an even more global direction.”