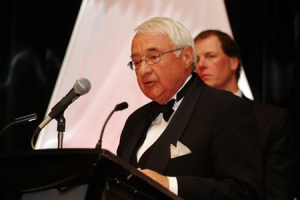 Dr. Flannigan, who is celebrating his 50th anniversary in post-secondary education, was bestowed the award at the Canadian Council for Advancement in Education national conference in Prince Edward Island, June 4, 2007.

“I am honoured to receive this award from my peers,” said Flannigan. “Fundraising in post-secondary education is about supporting the students. Everything we do makes their learning experience better, and helps them reach their goals. It has been a privilege to work in this field and build a culture of post secondary philanthropy in Canada.”

Most recently Dr. Flannigan has worked with the UBC Okanagan Development Office, building a fundraising team to support the growth of the new Kelowna campus. His career in advancement began 50 years ago in Saskatchewan where he worked as an educator. In 1972 he joined Alberta’s Grant MacEwan Community College. Through his leadership, GMCC was one of the first colleges in Canada to establish a foundation with the sole mandate of advancing the institution’s growth through philanthropy, raising an unprecedented $15 million over 10 years.

Dr. Flannigan is also a tireless volunteer. He is a lifelong supporter of the United Way, leading several campus-based campaigns at three different post-secondary institutions. He is also the chair of the 2007 Heart of Gold Gala in support of the Kelowna General Hospital Foundation.

Dr. Flannigan will retire from UBC Okanagan on June 27 at the age of 73 to spend time with his wife Mary Jane and their family. However, he has created a lasting legacy through the millions of dollars he has raised to support the goals and dreams of students across Western Canada, building student scholarships and bursaries, research grants and capital projects.