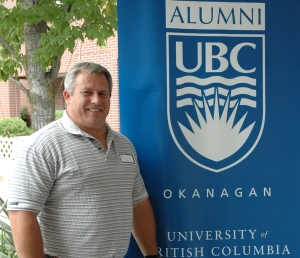 One of UBC's newest alumni, Stuart Hurd of Edmonton, recently converted his two degrees from the former Okanagan University College to UBC degrees.

A graduate from OUC with a science degree in 1999 and an education degree in 2004, Hurd returned to Kelowna last week to meet some of his new UBC alumni family at a reception hosted by UBC Okanagan Alumni Relations, and attended by members of UBC’s Alumni Association board of directors.

Hurd said that when he heard about the opportunity to convert his degrees to UBC degrees, “I hemmed and hawed a bit, but the UBC name is far more recognizable. And my institution didn’t exist anymore. So I thought it would be a good thing.”

When OUC closed in 2005, UBC Okanagan was established at the former institution’s North Kelowna campus. Through a degree conversion program created by UBC last fall, Hurd becomes one of the newest members of UBC’s fast-growing alumni family.

“More than 2,300 OUC degree holders are eligible for UBC degrees,” noted Brenda Tournier, manager of alumni relations at UBC Okanagan. “OUC alumni who convert their degrees will be joining UBC’s 8,000 alumni living in the Okanagan region and nearly 250,000 alumni around the world.”

Over 400 OUC alumni have so far applied to convert their degrees to UBC degrees. The very first to complete the process was Elizabeth Kershaw. The Kelowna resident received her OUC Bachelor of Arts degree in 2004, and said that in addition to having access to services such as the UBC Library system, she looks forward to making many new connections in UBC’s worldwide alumni community.

“It’s great to have that alumni connection all over the world,” she observed. “When I went to Europe in the summer of 2004, I didn’t have that connection, but when I go again I know there’ll be alumni all over Europe to connect with.”

Kershaw also welcomed the permanence of her UBC degree. “I know in 10 years UBC will be here, and to me it’s important to have a degree from a university that is still in place,” she says. “I’m proud to be a UBC alumna. I’m glad I did it.”

Heidi Taylor completed undergraduate studies at OUC and earned her law degree from UBC. “As a holder of UBC and OUC degrees, I am so excited for up and coming and existing students at UBC Okanagan,” she told the alumni gathering, speaking on behalf of the Okanagan Chapter of the UBC Alumni Association.

“This new generation of UBC students and alumni truly have a fantastic opportunity to take advantage of the resources of a large institution such as UBC, combined with the small campus feel here at UBC Okanagan,” said Taylor.