Early Italian immigrants left their mark on the Okanagan 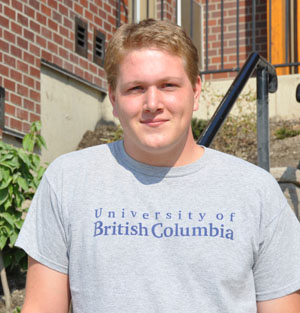 “I’ve found the influence is really big in some places – like Trail, Revelstoke and even Kelowna,” says Christiansen, who is focusing his research on Italian immigration to British Columbia from the 1880s to the 1920s, using the Thompson-Okanagan and West Kootenay region as a case study.

In the Kelowna area, for example, Christiansen says large portions of the winery industry, infrastructure and farmland were developed by Italian pioneers.

“There wasn’t a big demographic, but they had a lasting impact, helping to create what is now a very significant part of the city’s identity: the wineries,” he says.

Though studied extensively in Eastern Canada, Italian immigration is largely unexplored in British Columbia. Over the last few months, Christensen has traveled extensively to various libraries, museums and Italian clubs to explore archives, financial records, personal correspondents and other documents, hoping to gain insight into the day-to-day experiences and challenges Italians faced during their integration. He also interviewed several people of Italian descendent still residing in the areas of study.

“This is a fairly broad paper, but my hope is that it will spark interest in the subject matter and inspire others to focus on one of the specific communities I’ve researched, or look closer at some of the people in those communities,” says Christensen.

“For example, there was one individual in Vernon who came from Italian nobility — he was part of one of the oldest families in Italy’s history. Although he came to Canada partly because of the political turmoil, he also immigrated because of an alleged extramarital affair and an illegitimate child – it was a huge, fascinating scandal.”

And although Christensen uncovered this “scandalous” event involving Italian nobility during his research, he says most of the data he collected points to less dramatic trends driving Italian immigration to the interior of B.C.

“Most Italians came in waves, from what I’ve discovered,” says Christensen. “A good number came after 1870, as a result of the unification of Italy, which created considerable political turmoil in the country. As a result, many Italians came between the late 1890s and early 1900s, generally to work, as there were lots of opportunities, particularly with the Canadian Pacific Railway and in mining.

“Then after 1920, you see another surge of immigration, partly due to the rise of fascism. Once the Italians started to make money, they began to build infrastructure and communities,” says Christensen.

Christiansen’s research project is supported by the Undergraduate Research Awards (URA) program established by the Irving K. Barber Endowment Fund Advisory Committee. The purpose of the program is to encourage undergraduate students to pursue innovative and original research as part of their learning experience while at UBC Okanagan. The URA program sponsors between 15 and 20 awards for students engaged in summer research projects under the supervision of one or more faculty members.

“Working on this project has been a very rewarding process,” says Christensen. “B.C. history is fascinating — it was the Wild West of Canada. This summer I really developed a greater appreciation for history, especially our history, thanks to this opportunity.”